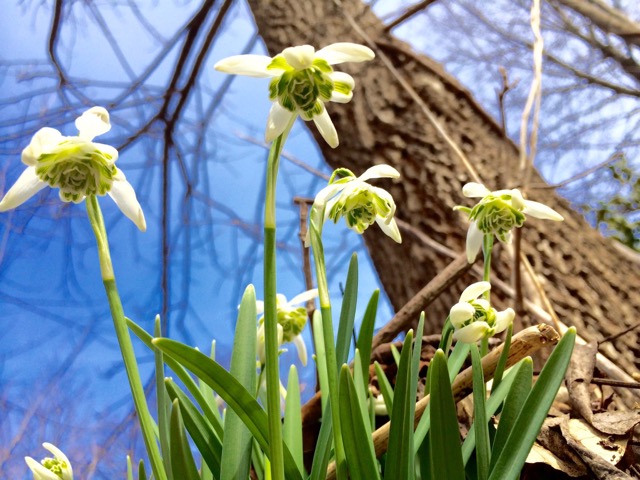 Stockbridge — A gardening friend once told me he thought of spring as “the collective nervous breakdown of gardeners” – a momentary frenzy that is set upon us all by melting snow and growing to-do lists of all that should be accomplished in the spring to get the garden into shape, along with all of the tasks that we did not complete in the fall. As an inveterate list maker, I understood what he meant. How would I ever get through the raking of beds and areas of the lawn that I never managed to get to in the fall? And what would lie beneath all of this chaos – half-dead perennials, a rotted-out lawn, the carcass of some unknown beast? I could almost hear the soundtrack from some horror movie in my head. But in addition to all the tasks left unfinished from my fall clean-up, there was an entirely new list of things of spring tasks to check off – the cutting back of ornamental grasses, the removal of the evergreen boughs that I had tenderly placed over some newly planted Himalayan maidenhair ferns and epimedium so they could start acclimatizing to their new home, and the trimming back all of the perennial seedheads that I left for the birds to feed on for the winter as well as the mopheads of paniculate hydrangeas that towered over me despite the fact that the variety was only supposed to grow to four feet tall. The list was quite daunting and I chided myself for not getting more done in the fall.

Many gardeners cut things down in the fall and prefer the blank slate of their garden (or the idea that they have less to do in spring), but for me, the dried seedheads and shocks of foliage throughout the garden serve to remind me of the landscape that lies beneath the snow pack, and this year, with so little snow, they were all that I had to look out at, period.

But enough about the weather – never get a gardener started on weather, it is the most boring of conversations as we express all of our fears and anxieties for ourselves, the world as we know it, and the plants we love. My dear friend Henriette Suhr would call me every day in the winter to express her concern for her rhododendrons encased in ice, and worried about reports of freezing rains and northerly winds, only to call as the snowdrops and winter aconite come forth in early spring to say that all may be OK in the world after all. Weeks later, she would call and tell me her beloved rhodies had survived their cryogenic state and had also come back to life. I fondly recall her winter concerns and work hard to remember her first call of spring, which represented the life force of gardeners around the world – or at least those in temperate climates.

Gardeners constantly need to look for signs of hope in the landscape and in weather patterns. And this preternaturally warm March seemed to me nothing less than a gift from the Gods, a granting of some extra time to get myself caught up on gardening chores I had avoided last fall. And these first forays into the garden, remind me why I garden. For it is the sense of wonder one has, unearthing the soft purple blooms of a hellebore that I had been coddling for its distinctively small, nodding blooms that are reminiscent of a girlish ballerina, the white and green petticoats of a double form of snowdrop that has spread its seed in various parts of the garden (and needs to be moved about some more by me so that it continues to naturalize in areas closer to the house), and of the emerging buds of sedum and baptisias that reveal themselves as I pull away the leaves that were left on the perennial beds in the back border.

While working on my hands and knees, trimming away the blackened hellebore foliage and snapping off the dried stems and seedheads of the baptisias, I fretted that another task had to be taken on and scheduled, the moving of many of these spring-blooming plants to an area closer to the house so that I could see them while working in the kitchen or sitting at the window in my bedroom reading. All that I could think was – great — one more task to add to the list of things to get done, but then I realized, these plants were not meant to be viewed from the window but were exactly where they should be, set off a bit from the house so that they would lure me into the garden to work and observe their beauty. It seemed like life would be OK, and with any luck, two tasks seemed to fall effortlessly off my list. I guess it is spring.

One thought on “The Self-Taught Gardener: Spring fever”