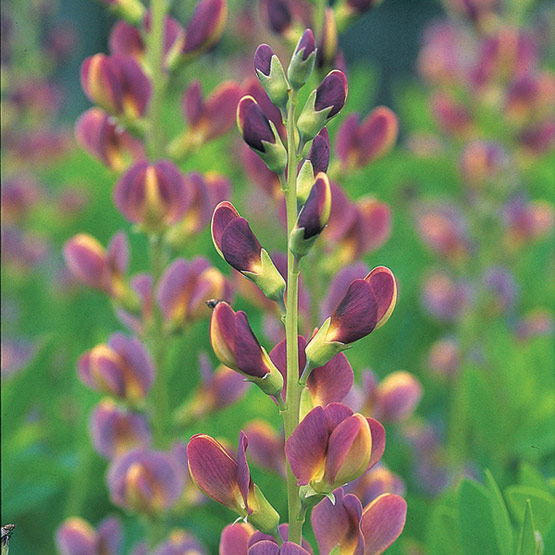 My friend Joseph fascinates me with his ability to burn energy that he has not appeared to have consumed, almost as if he absorbs it from the air. He can play tennis all day and talk all night without a down moment. He is, of course, a Texan and reminds me of another Texas native, Baptisia australis. Also known as false lupine or wild indigo, this species and its varieties are equally at home in a container on Joseph’s rooftop in New York City as they are in the back border at his house in Nantucket or in the fields that surrounded his childhood home in Texas. They are highly adaptable to a variety of conditions. And like Joseph, they belong to a family that can seemingly live on air: the pea family or Fabaceae. This family includes lowly clovers, peas and beans, perennials such as baptisias and lupines, and wonderful flowering shrubs and trees such as indigofera and the goldenrain tree, as well as a few weedier genera such as Scotch broom and black locust.

It also includes a range of plants that I have not grown and of which I thought I knew very little – an array of desert plants that I was asked to identify on trips to visit my ex’s family in Arizona. Having never lived in a desert climate, I was unfamiliar with many of xeric plants that grew along the roadside and that populated the Sonoran desert. However, I knew that I was expected to have a reasonable knowledge of the plant kingdom, and so I struggled to figure out something I could say about the plants as we took a long road trip through the desert. Amazingly, my limited knowledge of botany helped me to identify something about these plants. Their unique flower structure, consisting of a keel and banners was reminiscent of that of a pea, and their pinnate foliage was somewhat common in the pea family as well. So I had something I could say, but really telling your in-laws what family something belongs to and that it bears legumes that one recognizes for their similarity to garden peas was hardly a long-lasting conversation. It was more like telling them that Queen Elizabeth is related to Prince Charles, really nothing to share at all.

But then I remembered that many members of the Fabaceae had a unique quality. Nodules on their roots had a symbiotic relationship with soil bacteria that were able to convert nitrogen from the air into a digestible nitrate form that would help sustain the plants. Remember, I told my in-laws, the first letter of N-P-K on a fertilizer package is for nitrogen, which is essential for the leafy growth. And while this quality of converting nitrogen was of some use in more temperate climates when growing pea or soybean crops, or even as a cover crop of clover to be turned in to add nitrogen back into overworked soil, it must play an even more essential role in a desert climate where absorbable nitrogen is harder to come by. Nitrates are usually produced by decaying vegetable and animal matter, but how quickly would such matter decay in an arid environment where there was little water to break it down? All of a sudden, the pea family’s place in the desert made even more sense to me (and hopefully to them), because while these plants, just like other plants, still needed water that was less then plentiful, they

had an evolutionary advantage over many other species, because they could access an essential element that was hard to find in the lean soil of the Southwest. I took a deep breath and relaxed as I inhaled my own mix of oxygen and nitrogen that would sustain me through the rest of the trip. I felt like I had found enough to say on the subject. It was like having Joseph in the car at my side keeping the conversation rolling.

This ability to pull nitrogen from the air gives this hard working family a special place in my heart (the pea family that is, although my ex’s family was always good and kind to me as well and as far as I know was hard-working to boot). And now, as I settle in to the sandy soil that is my inheritance in Ashley Falls, members of this family (again, the peas) are at the top of my list. I do not like to use fertilizer other than a bit of compost, so baptisias and galega top my list of favorite perennials for my nutrient-light garden. Shrubs, such as blue-and-white flowering Father David’s sophora, the pink-blooming indigoferas, the purple-flowered lespedeza or bush clover, and the delightful orange-blossomed Colutea top my list of additions to the garden. And while I love them for their flowers, their finely cut foliage makes them great additions all season long. And if I decide to grow something else that requires a richer soil, I may even help it along with a cover crop of clover, turned over as a green manure so that it releases the nitrogen it captured from the air into the soil.

So, as I search out more members of the pea family to add into my garden, including ornamental giant clovers and the showgirl that is Dalea purpurea being grown for me by my friend Michele at Gowanus Nursery, I realize that my garden will grow well with the soil that I was given, as my plants simply take in the air around them and get most of what they need. And maybe these well adapted plants will leave me some time to go play tennis with Joseph.