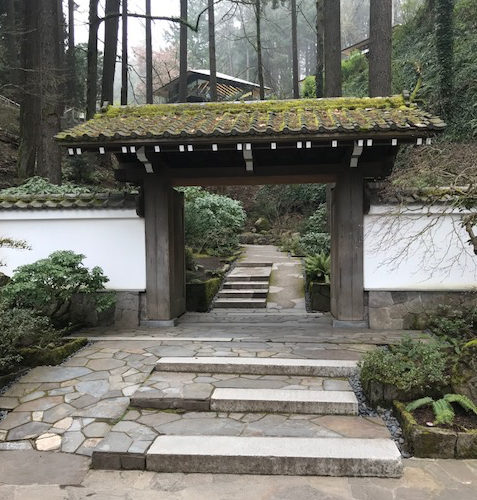 A recent trip to Portland, Oregon, left me with a brief moment to examine the local landscape. Early one morning, I found a few minutes to go and see the much discussed reworking of the entrance to the Portland Japanese Garden, a project that connected the work of two talented designers: the architect Kengo Kuma and the landscape architect Sandafumi Uchiyawa. And one thing became clear from the moment I headed up the Douglas fir-covered hillside to the garden: these two sure do know how to make an entrance!

I have a hard time remembering the old entrance to the garden. For some reason, my impressions of what had existed before remind me more of the park’s past history as a public zoo than its life since the 1960s as a Japanese garden. I am assuming my fuzzy memory might be the result of what was not a very memorable experience, not the decline of my ability to recollect great experiences. One thing I am sure of is that the new entrance and the landing at its top are unlikely to fade from memory anytime soon.

From my first glimpse of the ticket booth, I knew I had arrived. Somehow Kuma had managed something that Western architects had attempted to do for more than a century: to embrace the style of Japanese architectural tradition and to bring it into the present. His use of materials gave stone, steel and glass the weightlessness of a shoji screen. Somehow the power and durability and heft of these materials seemed at once ephemeral and almost delicate. I have never been charmed while waiting to check in at a theater, an airport, or a public garden, but at this new entrance the usually mind-numbing experience had been turned into something akin to being welcomed by the host at a Japanese garden on your way to a tea ceremony. It was simply a part of the protocol: the path forward was laid out, one moved beyond this first act and one was ready to begin one’s journey.

The path beyond took me past a stunning water feature and up a meandering path that led to the garden’s gate. The plantings and stonework entranced me. I am still not sure if the path I took was ADA accessible, although it appears to have been, but given the climb that was ahead (part of the mountain had been blasted away to create the path up to the garden at its apex), I was grateful for the gentle curving paths that led me forward. And the destination to which they were taking me (a cluster of buildings atop this steep rock face, sitting tantalizingly above), would have given me the motivation to move forward even if the pleasure of walking the path had not.

The path reminded me of time I spent studying garden design in Kyoto many years ago, and of what my professor taught about the art of having a path laid out before you, an important feature in many Japanese tea gardens. Each element is set before you to change your pace, or cause you to look up at a view, or to simply give you pause to notice a fern, some artfully laid stonework, or to stop and hear the sound of the world around you. Somehow this new entrance to the garden brought all of that forward: one could not help but stop and view Kuma’s buildings from below, to admire their cantilevered forms and the use of glass and metal roofing as well as the Alaskan cedar and other woods that somehow all melded together into forms at once ancient and modern. Crossing the bridge to the lower landing just below the collection of buildings that marked the next step in entering the garden, I felt like I had already arrived somewhere that was at once familiar and completely new. As I arrived at the center of the cluster of buildings that inhabit this town-like square, I knew that everything else I would see, in the garden and collected within these buildings, would also bring me the same experience. Once again, I felt that I had arrived. 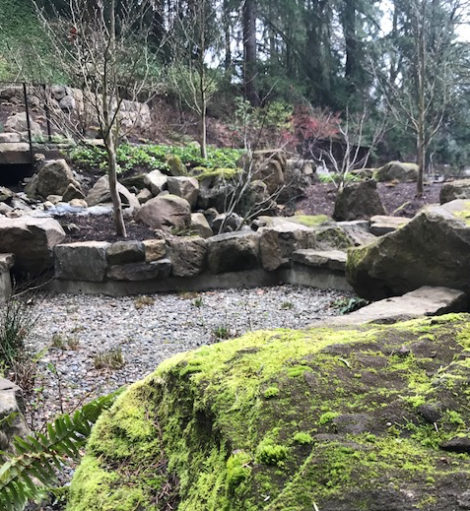 2 thoughts on “Self-Taught Gardener: It takes a village”