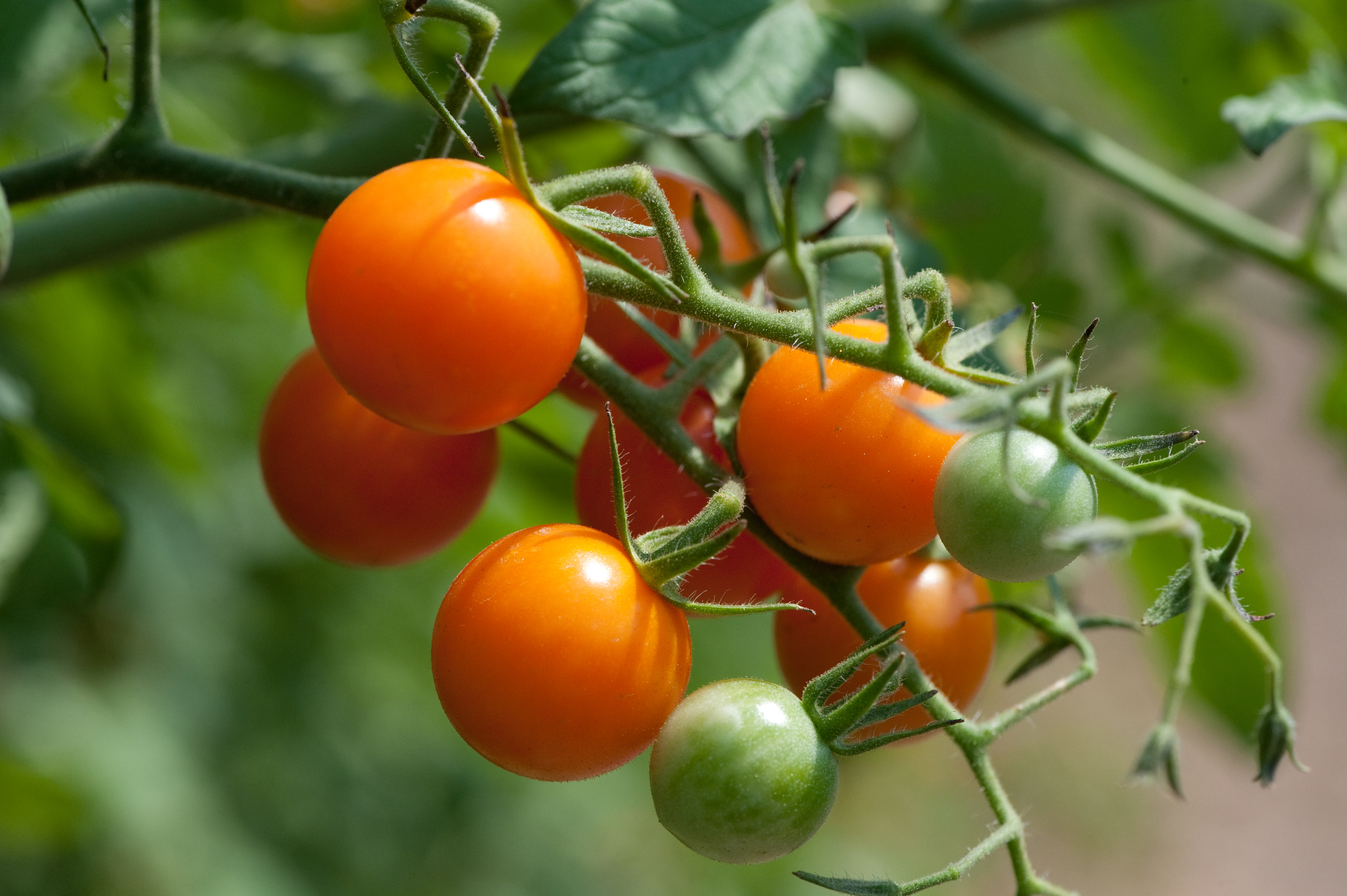 When I was growing up in the Midwest, if someone said that he or she gardened, the conversation that followed was not about roses, flowering perennials, or even beds of carefully placed annuals; it was about vegetables. And one vegetable was always king: the tomato. For my father, these fruiting vines defined summer. Both at our house and at our cottage on the lake, my dad routinely monitored his tomatoes. He would inspect them when he got home on weekday evenings. On Friday nights, when we arrived at our cottage, we would barely have unloaded the car and he was off, flashlight in hand if we’d had a late start, to see how the plants were faring in the garden that we shared with his best friend Ray. As the season progressed and tomatoes were ready for harvest, Dad would first stop in the kitchen and slip a saltshaker into his pocket, where it would reside all weekend next to his omnipresent penknife and a freshly pressed handkerchief for wiping and cutting the tomatoes that he would harvest so that they could be eaten immediately in the garden.

In the late seventies, most vegetable gardeners primarily grew hybrid varieties of tomatoes – varieties that would not come true from seed but that that were the result of the intentional crossing of two genetically distinct parents. These crosses produced plants that had been selected to be disease resistant, to bear early, and were often varieties that were developed to ship well. At home, we grew a variety of such tomatoes, many of them beefsteak varieties created by the W. Atlas Burpee Company to be bigger, more uniform, and redder than other varieties, and as fleshy as a steak, hence their name. Dad loved these and would simply slice and eat them with a little salt or occasionally he would bite into one as if it were an apple, the juices sliding down his chin with his signature broad smile still in place. No one smiled more than Dad, particularly when homegrown tomatoes were on hand.

We called our cottage This is It, because when my siblings and I were first taken on the long journey to the twenties-era lake bungalow that my parents had purchased and were told that we had arrived, my adolescent sister quickly retorted, “This is It?” Over time, the name took hold and, as we renovated the house and garden, with help from neighbors and our extended family, it went from a sarcastic question of a teenage girl to a statement of ultimate satisfaction. This is it!

Between idyllic swims in the spring-fed lake and hikes in the woods, the garden grew. Ray, our neighbor who was to become my father’s best friend, was a consummate gardener who owned a piece of land adjacent to our house where he had been growing his vegetables over the years. We eventually purchased the land from him, but he and Dad always shared the vegetable garden and it was a symbol of their connection and friendship with one another. The plot was home to a pair of apple trees, a peach tree from which we would occasionally make preserves or a funny peach liqueur that my uncle called peachkovitz, and a seemingly endless arbor of grapes, which we would harvest not for wine, but for jelly and for grape juice.

Ray was the gardener I would never become, organized, precise and knowledgeable about soil and good plantsmanship. He taught Dad and me how to turn the compost pile so that it would heat up, and how to select vegetables for the garden that differed from the offerings in the local grocery stores. And while these selections included otherworldly kohlrabi and colorful Swiss chard, which I had not eaten before, it also included a range of tomatoes that I had not seen before. Amidst the ubiquitous beefsteak tomatoes, there was an array of tomatoes varied in the shapes and colors that Ray had grown from seed in the greenhouse. They were heirloom varieties, old cultivated varieties of tomatoes from which, unlike hybrids, you could save the seeds and grow them on again the next season. My father loved them and Ray taught us everything we needed to know about them and the species that comprises tomatoes generally.

Ray shared his insights about how one could remove the lower leaves of a tomato seedling and set it into the ground more deeply (unlike many other species, tomato stems can produce roots if buried.) And he posited that younger plants without flowers would suffer less transplant shock than flowering plants, and would bear more quickly (a fact that is almost undisputed today). Additionally, he taught us the difference between determinate paste tomatoes, which we grew for canning, that bore all of their ripened fruits at one time and indeterminate vining varieties that grew indefinitely and continued to bear fruit over a long season. The latter required more complicated staking and pruning than the determinate varieties, which were simply caged and harvested over a week in the midsummer when my mother and Ray’s wife Marion would put up jars of tomato sauce to be used throughout the year.

It is now forty years later and the heirloom varieties that Ray first shared with us are more readily available at local nurseries and have gained their market share back. And while I love them, I also will always want to grow a Burpee “Big Boy” or two, not only for its taste and the way one slice covers an entire slice of bread, but because they too, like the heirlooms and the saltshaker that my dad would deftly slip into his pocket, are a connection to my past and a loving father whom I will always cherish for what he, and his dear friend Ray, taught me.

One thought on “The Self-Taught Gardener: Growing tomatoes with Dad”