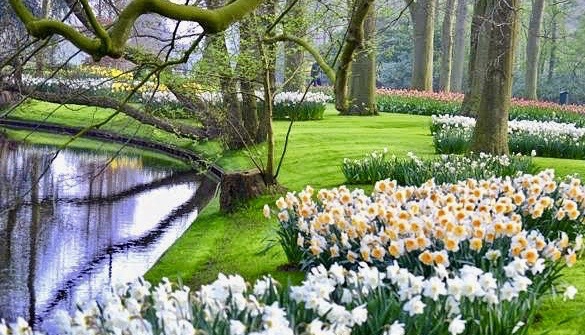 An unexpected gift of bulbs from a few houseguests (fall seems to be a great time for weekend guests with fall foliage at its peak) has given me a new task in the garden, just as I was finishing the cutback of plants that I take down prior to the season’s end. (Cutting back and removing the foliage of peonies and iris helps to keep them from overwintering pests and diseases, although I leave up the seed heads of other plants for winter structure and for the birds). I was not planning on planting any bulbs this season, given that I am still figuring out my overall plan for the garden. Bulbs are usually the last plants (after trees, perennials and shrubs) to be added to a garden because, like ferns, they are so good at filling in the remaining empty spaces within a bed or border.

But no gardener passes up a gifted bulb. Many years ago, I came home in late October from a two-month trip to Japan to find that the Netherland Bulb Grower’s Association had sent thousands of pink and orange-cupped narcissi to my old house in Connecticut to experiment with in the border (at the time, I had an even stronger disdain for the color yellow, which the bulbs growers kindly took into consideration in making their selections), and I spent the next few weeks digging in the cold earth and placing the bulbs in drifts along the woodland edge at the front of the property where they continue to thrive and prosper for the new owners. At the time I favored long sweeping Jekyllian drifts (inspired by the planting style of British garden designer Gertrude Jekyll) that set each daffodil variety off from the next. This is a look that could be even more effective with jewel-toned tulips, although my preference for tulips was to use them in mixes (my favorite being a combination of ‘Orange Emperor’ and purple ‘Queen of the Night’) and placing them in the raised beds of my vegetable garden. Because tulip bulbs often weaken and their flowering diminishes after a year or two, I would use them as annuals or cut flowers and replace them with a new color scheme each year. By selecting early-blooming varieties, I could plant them in the vegetable border and take them out in time to plant tomatoes, green beans, and cucumbers. To be surrounded by them made the time spent prepping the vegetable garden in early spring more fun.

But my new garden in the Berkshires seems to warrant a new approach to using bulbs. Jekyllian drifts seem too formal and sweeping, although there may be a place for some such dramatic planting outside the kitchen window. Such plantings remind me of trips to the Keukenhof in the Netherlands, where millions of bulbs are planted out for display each year by bulb growers as part of an exhibition that has been going on for decades. The effect is like a trip to Oz. It’s wonderful, but a bit off the mark as an approach for my more naturalistic garden.

On one visit to the Keukenhof, I had the pleasure of meeting the garden designer Jacqueline van der Kloet, who works with Piet Oudulf on many of his projects. By using bulbs – small species tulips and squill, and snowdrops and crocuses — singly and randomly within beds and borders, amongst cranesbills and emerging perennials, she was able to create an early season meadow of sorts that exhibited a verve and an energy that was nothing short of delightful. The conventional wisdom at the time was to cluster bulbs or to plant them in “bouquets,” as my dear friend Henriette Suhr would call them when she positioned 15 to 20 tulips, often bicolored varieties with colorful flares, in small circles at Rocky Hills, her garden in Westchester County. And while this effect was dramatic and added structure to the border, a different sense of playfulness emerges from the flowery lawns and borders planted by Jacquelyn at Keukenhof and at the flowery lawn at the Pool Garden at Chanticleer in Wayne, Pennsylvania, calling to mind illustrations of the meadowy plantings of some medieval flower gardens that I remember from my garden history classes at the New York Botanical Garden.

Jimi Blake, the Irish gardener extraordinaire, uses a combination of bouquets and singletons in his garden to glorious effect. The clusters add bursts of color and form, while the individually planted bulbs work like fireworks in the border and often serve to unify the landscape and to connect various garden areas together. Given the current state of flux of my garden, I think it is best for me to add the bulbs I was gifted in a looser style and then to add some bouquets in the years ahead to fill in and energize areas of the planting that are in need of a spring push. So as I add my alliums, tulips, and fritillaria into the garden this season, I will also dream of a time when I am ready to go whole hog and add some bouquets and drifts of daffodils and tulips where they are needed. This act of dreaming and thinking of the future is what the fall planting of bulbs is all about, whether it is about what’s at hand for planting and will come up next year, or what will be added in the years to come.

2 thoughts on “The Self-Taught Gardener: The Gift of Bulbs”