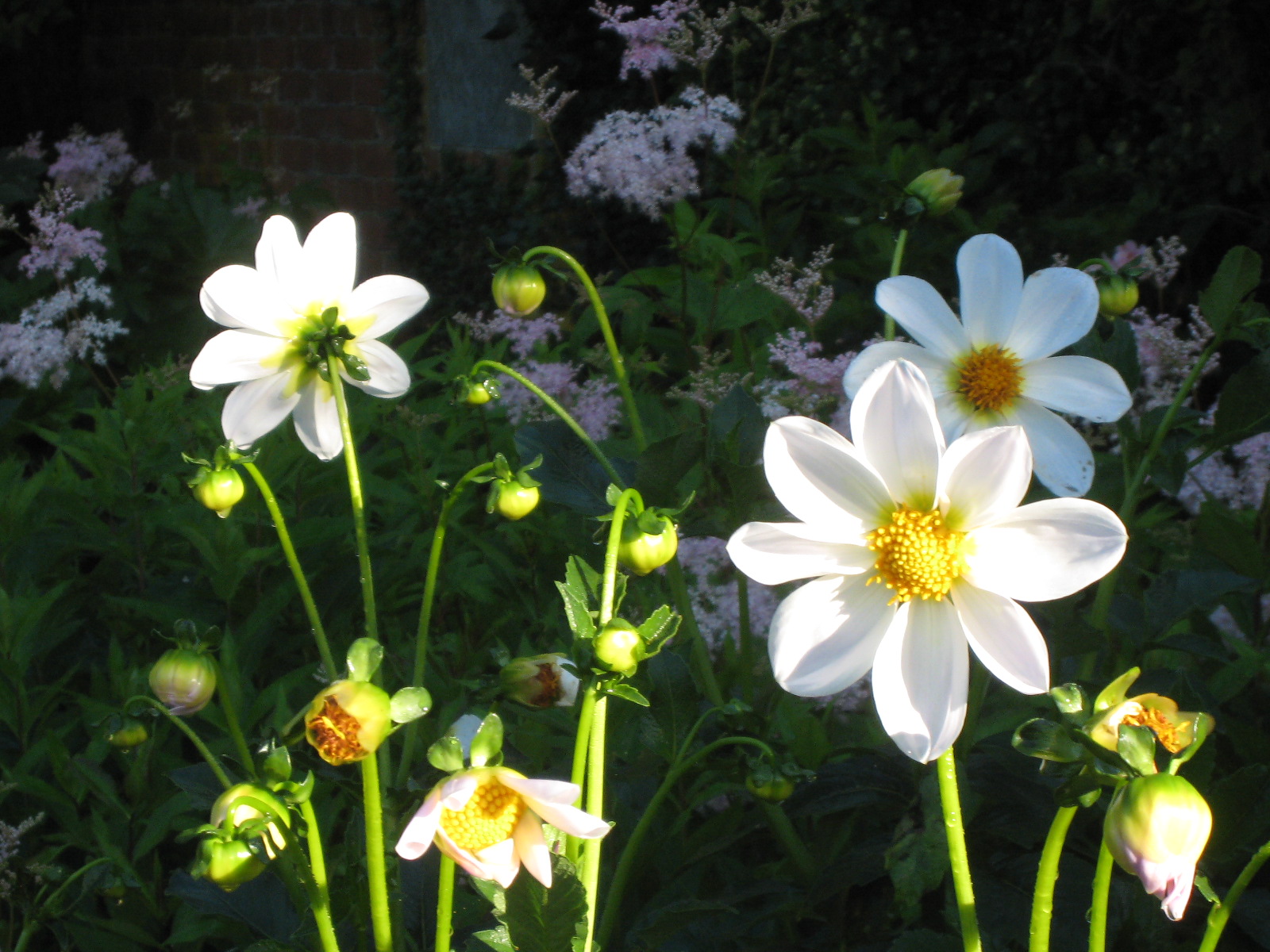 The late, great garden writer Henry Mitchell loved to throw shade on dahlias (this despite the fact that they grow best in full sun) by saying that they took up all too much real estate, and that you had to wait until they became the size of washtubs and began to bear flowers before you could begin to coo about them. However, he confessed, once he saw them in this state in someone else’s garden, he often found himself headed home to cut a swath through a border to create a space for them. After all, what other plant blooms on and on late into the season as the rest of the garden falls apart or turns to seed?

It is this last thought that I have used over the years to defend this often maligned flower. This ability to come into its own late in the season until it heads out with a shriek at first frost (dying an immediately black death not unlike that of the Wicked Witch in the “Wizard of Oz,” leaving nothing behind but a coal-black shroud and some tubers underground to be collected and overwintered) has often intrigued me. It has also given me a deeper understanding not only of dahlias, but of plants generally, and how they grow and flower.

However, first and foremost, I have to confess that I love every vulgar flower the genus Dahlia has to offer, from its initial blooms in mid-July to its explosion of flowers come late fall. From diminutive jewel-toned forms that get sold in six-packs at grocery stores to the single white varieties that seem to float over my friend George’s garden all season long (a variety that is much coveted by any visitor to Hollister House Garden) to a brilliant dinner-plate variety (“Thomas Edison,” I think) that Peter Wooster dashingly placed through a buttonhole on his sportcoat at a Columbus Day luncheon a decade ago. This specimen was actually larger than the dishes from which we ate.

These flowers are nothing but sheer joy. And as to whether or not to grow these plants, the answer was as simple as Peter’s statement about the wearing of his boutonniere: Why not? They are a smile, a flirtatious wink and hearty laugh all in one, comprised of the rows of petals for which flowers in the composite family are known. And there are forms for every palate – water lily forms and ball types, cactus forms with narrowly rolled petals that radiate like the sun, and decorative varieties that hold their petals as primly and uniformly as a tight-lipped English guest at the party at which Peter wore “Thomas Edison.” It is this array of colors and forms, the result of the easy hybridization to which Dahlia species are prone, that provides me with flowers from midsummer through Columbus Day.

I am thrilled when I can make my first dahlia arrangements of the season. They arrive on the table at about the same time as the first tomatoes and signify summer (a time I always associated with dahlias), but then the dahlias carry through. It is not surprising to see them in an even larger vase gracing the Columbus Day luncheon table, next to the gratin of layered cauliflower and winter squash, which is a tradition amongst my dearest group of friends. This event is really a celebration of the bounty of the season as it comes to an end, a last hurrah, an al fresco meal before late fall and winter set in. But what has always surprised me is how, as the tomatoes waned and the last cucumbers get picked, these dahlias seem to be bearing more flowers than ever. I was puzzled that this flower, that I once associated with summer, really performed its best late in the season. I wanted to know why.

My first foray into understanding this involved asking, not unlike my mother might about a newfound friend, where is it from? (In her defense, my mother usually referred to friends as he or she, lest you get the wrong sense of who she is). The species that have been hybridized to make the thousands of dahlias we cultivate originated in Mexico and were grown by the Aztecs. I had known that these plants were Meso-American, but that had always made me think that summer was their moment, as I thought of the heat of Mexico and figured that (and full sun) were what they required. But then a famous plant explorer told me the wild species from which cultivated varieties originated, were found in the mountains of Mexico, where the nights were cool. I had my answer, or so I thought. Fall provided the cool nights that helped them to form flowers, not unlike how orchids need a temperature fluctuation between night and day in order to form their flower buds. For years, while surrounded each fall by hundreds of blooms, I sat confident of this answer, self-assured and perhaps a tad too proud of this knowledge of what I saw as a resolved Aztec mystery (and of my connection to a famous plant explorer.)

It was not until years later, that I came to have an understanding of something else that impacts the flowering and growing schedules of plants, a concept called photoperiodism. Simply defined, length of day impacts plants (and also some of my friends, who seem to sleep all winter long) and can trigger them to grow vegetatively (or just be vegetative, as in the case of my friends) or to produce flower buds. Some species require lengthening days to flower and others require shortening days. Dahlias are in the latter category. Lengthening days promote vegetative growth in dahlias, but flower buds develop and begin to bloom as the days begin to shorten. A perfect cycle of vigorous foliar growth (the washtub of greens referred to by Henry Mitchell) leads to a plethora of flowers that may give one another use for said washtub — as a centerpiece for a fall lunch.

With the mystery solved and days shortening, perhaps it is time for me to let the dahlias do their work and to take a rest myself.