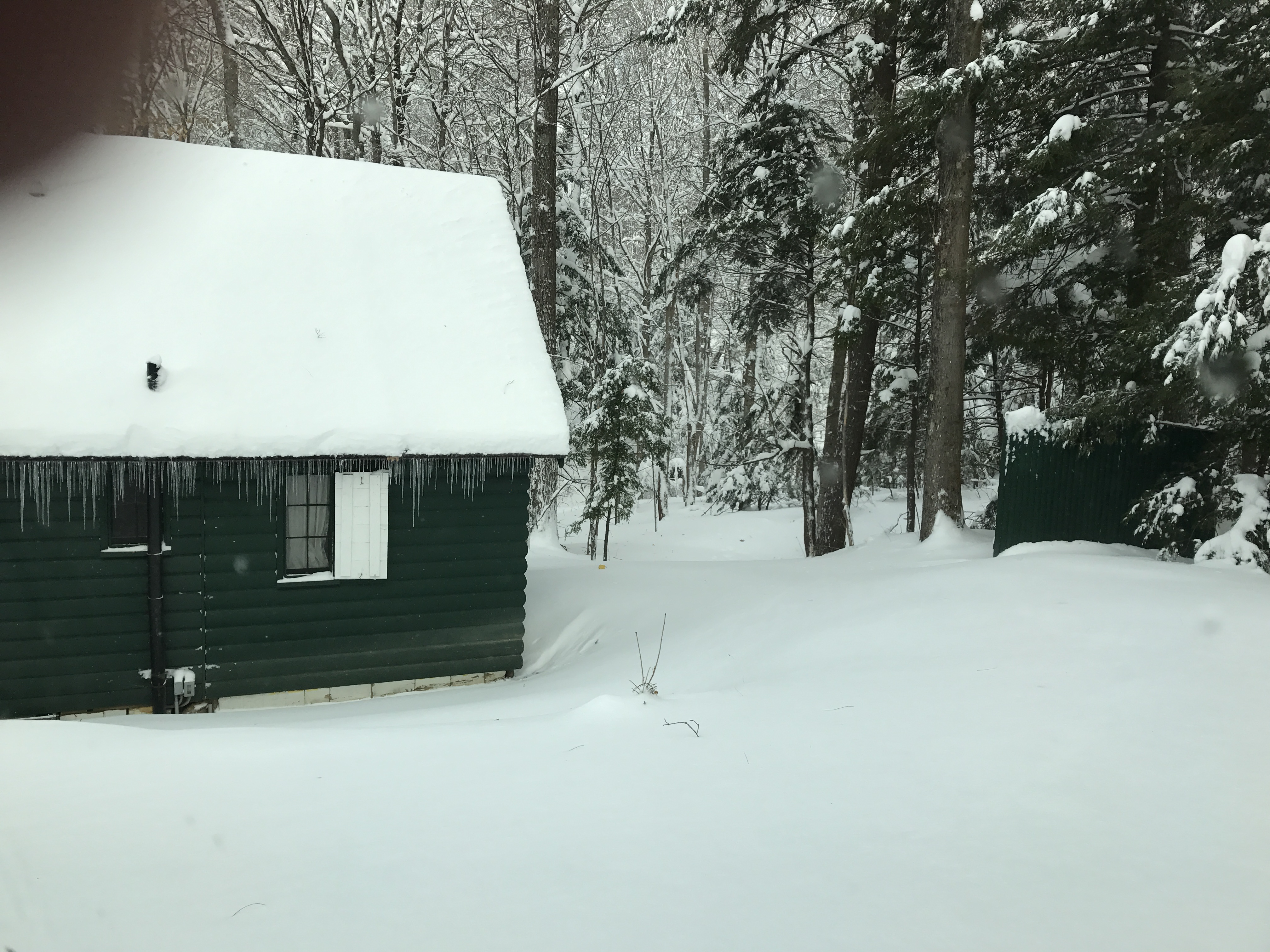 Editor’s Note: This is the second of two articles by Carolyn Newberger about the emotional consequences of selling her large family home and downsizing to a small house in the woods in Lenox. The first article was published in The Edge real estate section (Market Perspectives) last week.

Last year about this time, my husband Eli and I had just staged our 109-year-old home in order put it on the market after 44 years. Freshly into this momentous change, I imagined our lives as shaped like a top, beginning with conception, expanding with growth, experiences, and acquisitions, and then at some point rounding the curve of the top’s apex onto the steeper inward curve of contraction, as we slide into what, for Eli and me, are inevitably our final years.

Little did Eli and I know that it would take 10 months on the market to sell our house. After one false start with intrigue involving Asian gold and failing factories, we finally accepted an offer at Christmas time from a lovely local family and “boom,” we were out of the house by the end of January.

Through this process I’ve learned that the most important attribute of a top is not its shape but its spin. All of a sudden, we toppled over that expansion curve into contraction, big time. In one month, we engaged Camel Movers from Great Barrington, whose owner is a funky old guy driving a rusted truck with a camel on its side, Howdy Doody on the grill, and assorted stuffed animals and one plump pinup poster decorating the interior. His name is Crockett, and yes, he is a bona fide descendant of Davy of the same name. While Crockett blasted rhythm and blues and Billy Holiday throughout our downstairs, he and his movers polished our furniture before bundling it in quilted blankets, Crockett-wrapped every piece of crockery (sorry, couldn’t resist!), and created marvels of crushed paper cushioning to coddle our china.

Crockett coaxed, threatened, wheedled and cajoled us into a whirlwind of drawer emptying, shelf clearing, closet sorting, and basement cleaning. We were desperate to stay ahead of the force that was Crockett, dancing all the while, because who can resist dancing when rhythm and blues is penetrating every cavity of your brain.

We felt as though we were spinning in space, on a rolling ball careening us from one life to the next. Without that spin, we might have collapsed from the sheer weight of the tasks confronting us. As with a spinning top, the spin kept us upright, moving, and organized.

On the other end was, and is, our Berkshire home, two cabins in the woods, one of which is under an inch of dust, as we tear down walls and add a new room with huge windows to let the sunshine in. The second smaller cabin, on the other side of our pond, has become our temporary home, crammed with our clothing in one small back bedroom, boxes underfoot, and no horizontal surface free for such necessities as eating and writing. Basically we’re camping, in a limbo between one stable world, and, hopefully, the next.

As one corner of the house we expect to call home becomes complete, a piece or two of furniture or a box or two of, say, desk supplies, becomes liberated from the several storage sites to which Crockett delivered our belongings.

Every so often, Crockett and his guys, Brian and Brian’s son Kevin, appear at the door with a few new pieces of furniture that he figures we’re ready for. Plus, he’s anxious to get his blankets back. They unpack everything with care. Sometimes he’ll notice that there should be felt pads on the bottoms of the furniture, and fetches the packets of felt from the truck. Maybe a surface needs a few more rubs with polish. He put our antique bed together with longer screws, making it stronger and sturdier than when he packed it up. In our current state of being between homes, Crockett’s improvements seem to promise that we’ll find new stability in our changed lives.

As the top becomes organized as it spins, creating an axis at its center, and its mass revolving around that center, so with our changes, the activities of each day have organized us.

But we are obviously more than tops. We are complex systems that are open to influence and change. Even so, there’s nothing like a good metaphor and I beg your indulgence as I stretch the top metaphor perhaps further than it should go.

Imagine a spinning top with infinite horizontal cross sections from just above the point at the bottom, through the swelling body, across the apex, through the diminishing upper slope and into just below the final point of top oblivion. Each cross section will describe an orbit of the particles that comprise its mass. In other words, the top’s shape doesn’t just expand and contract through space, it also contains a spinning universe every horizontal step, or more poetically, every flow of the way. The vertical expansion and contraction of our own lives over time similarly intersects a horizontal dynamic of forces that hold us together moment to moment, a kind of orbit of elements forming our personal identities.

That’s a lovely image, but it doesn’t do justice to the real truth about orbits, which is that they are at the center of a violent struggle between opposing forces. In order for an object to orbit in space, it has to circle around another body that draws the orbiting object to it. But in order for the orbiting object not to crash into the body around which it orbits, there must be a counter force pulling in the opposite direction. The orbiting object, therefore, is held in motion by competing forces. Were one to prevail over the other, the object would either fly into space untethered, or crash into the planetary body at its center. Either violation of its equipoise would be its destruction.

So what is the center around which a person orbits through time, and the forces that hold that person in place?

I’m reminded of a short story written by Sandra Sisneros entitled “Eleven.” In the story, a girl named Ruth is turning eleven that day, trying to grasp the wonder of her new year of age as she sits in math class at school. The teacher holds up a smelly old red sweater left in the cloakroom and demands to know to whom it belongs. No one answers until a girl points to Ruth and says that it’s hers. Ruth objects that it’s not hers, but the teacher insists that it is Ruth’s and forces her to wear the sweater. As Ruth wears this shameful sweater, she doesn’t feel eleven any more, she feels three. She realizes that her previous years are still within her. Sometimes she’s three, as at this moment, or one, or seven, but as she wears the red sweater, she is no longer eleven.

Circling around Ruth’s human core are all her years, and maybe all her moments within those years, always there, but not always activated.

By Ruth’s reckoning, at my age there would be an awful lot of moments circling in my personal galaxy, and a lot of ages to feel like, depending on the circumstances, all the way up to 76. But the funny thing is, the age I feel is remarkably consistent. I am 16. When I happen upon myself unexpectedly in a mirror, I’m shocked to see someone who doesn’t look like me, someone with wattles, wrinkles and graying hair. Who is that woman? She is certainly not the young, vibrant, juicy sprite that I feel I am. When I have no choice but to look in a mirror, say to comb my hair, my vision blurs, my chin tilts, and I only glance, quickly, at what needs to be seen. I do not confront my internal self.

When my mother was in her nineties, I told her about feeling sixteen inside, as though that were something remarkable, something she at her advanced age couldn’t possibly feel. My mother replied angrily, “What makes you think that I don’t feel 16 inside, too.”

I may be wrong, but I suspect that each of us has an internal age. That is perhaps our constant, the force at the center around which the contemporary moments of our living life revolve. The external pull, that keeps the living life from collapsing into the narcissistic delusion of that internal age, is experience, the forces of the external world that demand thought, resilience, adaptation, or, perhaps, surrender.

Contemplating the question of internal perceptions and external pulls brings me back to one of my earliest memories. I was 4 years old, in my first day at kindergarten. We children were seated at connecting tables. The little boy across from me looked at me challengingly and said, “I can count to a hundred.” I looked back at him with what I imagine were narrowed eyes and replied, “I can count to a hundred, too.” “Show me,” he said. And so I did. I began to count, “1, 2, 3, 4, 5,” up to 11. Then I continued, “Elevendy-one, elevendy-two, elevendy-three, elevendy-four,” through “elevendy-nine“ and then triumphantly, “100!”

“Oh,” he said, and resumed his coloring.

What does this have to do with the gravity of internal age and the pulls of the external world, you may ask? I would argue that my story illuminates something central about our core selves, around which our lives revolve.

Even at age four, I had a foundational perception that I was a winner, which was activated by my classmate’s boast that he knew something he figured I didn’t know. My being a winner and his claiming superiority were opposing forces. For me, the resolution, the calm place in the middle, was to count to 100 in whatever way I could devise. (I was a fortunate child. Imagine if my core perception were that I were a loser.)

This story has stayed with me ever since, as one of the orbiting bodies that create my galaxy through time.

Perhaps we use internal age as a marker, less about a particular year in our lives, and more about a way of feeling that we attribute to that age. If I had been able to expand the time of being 16 to the rest of my life, I would have missed out on romantic and mature love, the scientific method, skiing, the perspective of other cultures, the blessings of our daughter and her family. That would never do.

I do feel that the sixteen-year-old that I carry inside me reflects a certain kind of innocent confidence that what is to come is something to look forward to, and that the four-year-old scrappiness is in me, too. So far, that pull toward confidence and resistance has served me reasonably well in finding the middle place against opposing forces of disappointment, responsibilities, relationship stresses, and losses. I’m well aware, though, that I have led a privileged life, with far fewer stresses than those suffered by many others.

If an orbit is the middle way, the equipoise between the pull in and the pull out, the moment of calm between the tides, the eye within the storm, will I be able to continue to find the calm places within the inevitable losses age faces, from selling our home of 44 years, through illness, loss and death? That is the question.