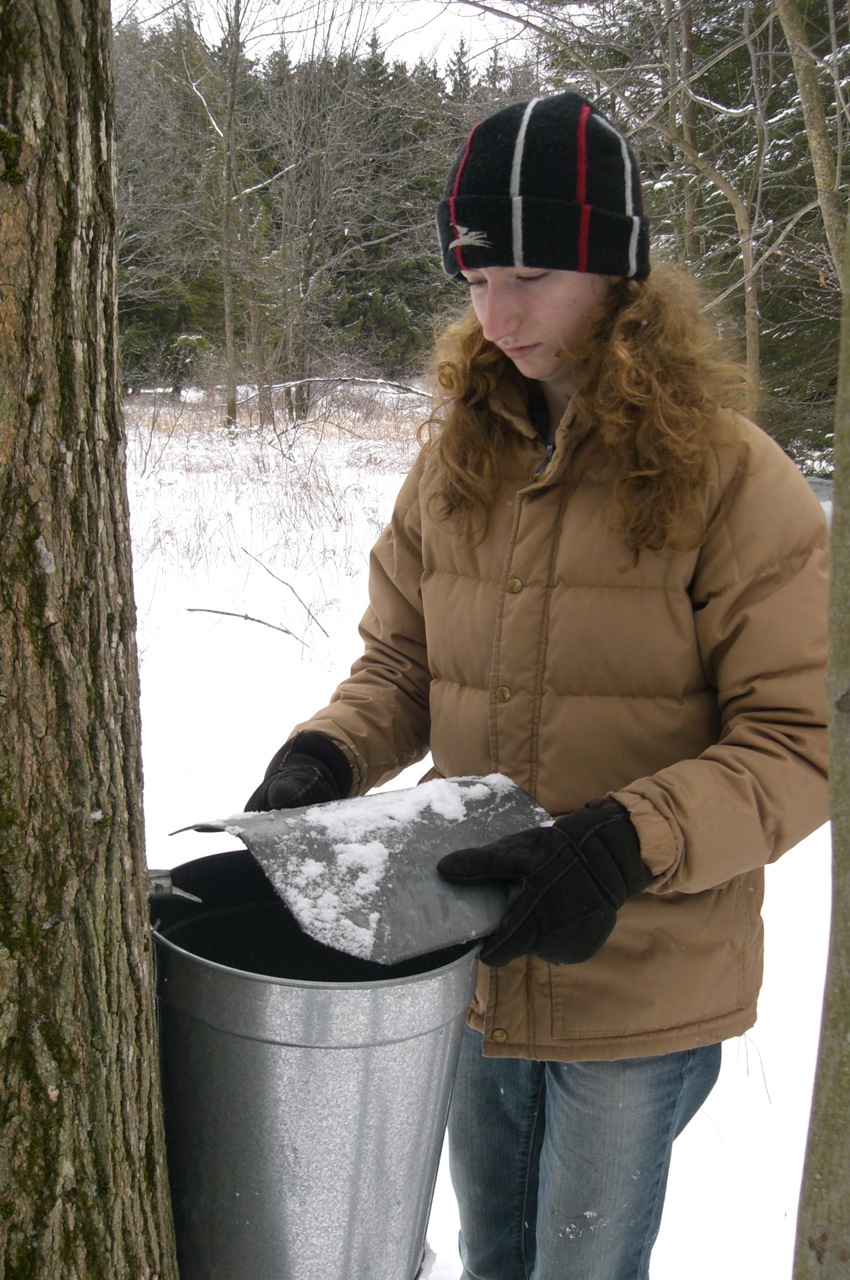 Spring – rush out in a stream.

Spring – suddenly reveal something to somebody.

Mt. Washington — For months, the temperature dropped, snow fell and we layered wool upon wool with goose down on top, day and night, indoors and out. We named our bedroom “the refrigerator,” laughed a lot, and never once got a sniffle. Now we’re exhilarated as we begin to thaw and freeze in rhythmic alternation. For decades, it’s been my custom, as the vernal equinox approaches, to recognize the start of the freeze-thaw pattern because that alternation brings about sap flow in maple trees and thus announces the maple sugaring season.

Maple sap flows when freezing nights are followed by mild days, especially sunny, windless days. It is the time to tap trees, drink their sap as a spring tonic and boil the elixir to make maple syrup for the year ahead. In all my years of priding myself in being the first in all the countryside to read the season and put taps in, I hadn’t realized before now that I freeze and thaw and flow with new sap along with the trees. Under the veneer of modern invention we are rooted in the same natural world as earlier native forest people of the northeastern states and Canada. Our spring awakening is one with the awakening of the maple trees.

“A sap-run is the sweet good-bye of winter. It is the fruit of the equal marriage of the sun and frost.” John Burroughs, in Signs and Seasons, 1886

Red maples, sugar, silver and even Norway maples may be tapped for making syrup. The sap is a shiny, seemingly clearer than water, slightly sweet liquid that may be taken from the trees without harming them when done correctly. In addition to its higher sugar content, sugar maples became the tree of choice for sugaring because their flower and leaf buds open later than the other maples, making for the longest sugaring season. When nighttime temperatures moderate the sap ceases to run.

Wild food enthusiasts (this could be you) are likely to collect the sap by hanging buckets on spigot-like tubes called spiles inserted 2 – 2 ½” into the trunk of the tree’s outer sap layer. Commercial producers often run plastic lines of tubing that are strung from tree to tree in their maple forest. Streams of sap flow into large collection tubs or tanks that are destined for the “sugar house,” a shelter where sap is boiled. Billows of white steam from boiling (roughly 40 quarts of sap boils down to 1 quart of syrup) can be seen rising from just below the peak of a classic sugar house roof where louvers may run the length of the building. Wood fire smoke escapes from a separate chimney. There are many new and old technologies and fuels for “sugaring off” — boiling sap to syrup — at home and on the farm.

Maple season is in full swing around our region. Be a part of it by visiting a sugar bush and sugar house. Enjoy books recommended by Eric Wilska of The Bookloft, Great Barrington, himself an experienced maple syrup maker. His picks for families, general reading and technical information are Sugaring Time by Kathryn Lasky; Maple Sugar: The History, Lore, and How-To Behind This Sweet Treat by Tim Herd; and The North American Maple Producers Manual.