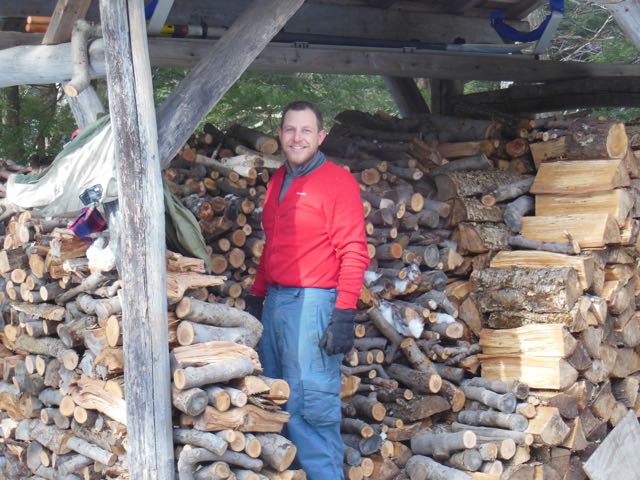 Mt. Washington — Winter speaks in the roar of the forest; the whoosh and tinkle of windblown snow skimming the surface of round, icy ponds; a settled silence; and – during the recent, brief thaw – thundering waterfalls that rumble through us.

Winter is written in ribbons of three-pronged turkey tracks stamped in the expanse of dense, wet white carpet soaked through by rain showers. Last week, a deer mouse left its signature tail- and footprints lightly etched on new, soft snow at the garden’s edge. A lofty, rolling blanket like a down coverlet has been spread over the undulating garden beds for weeks, augmented by frequent snow showers that looked like goose down falling from the sky.

Winter begins for many in the Berkshire Hills with tending uninterrupted wood fires for heating homes and workspaces or making an occasional hearth-warmer. Keeping ahead of the need for seasoned firewood is of equal import to storing a robust crop of garden vegetables and fruits. Windy Hill Farm marked the winter solstice with the final pressing of its exquisite, unpasteurized apple cider. When I stopped to fetch a gallon, and a bushel of apples from the orchard before the nursery would close for the season on Christmas Eve, I noticed two pallets of tightly stacked, firewood-length, silvery applewood set like handsome columns on either side of the path to the garden shop. The wood had been cut a year ago, just about perfect for mixing with the slightly drier wood I already had.

In short order, I had two cords dropped beside my woodshed and a sense of urgency about stacking it out of the elements. It was entirely coincidental but gleefully fortuitous that my stepson, Riley Waggaman, a proven stone and wood stacker, was to arrive for a visit in early January. Also, but unknown for his talent at the time, Ben Katko of Socorro, New Mexico, was expected to be our houseguest. The two jumped into the task together, but Riley credited Ben with engineering the most efficient way to stack the load of mostly round pieces. Ben persisted solo until he set every last stick, then bestowed a beautifully crafted structure as a house gift.