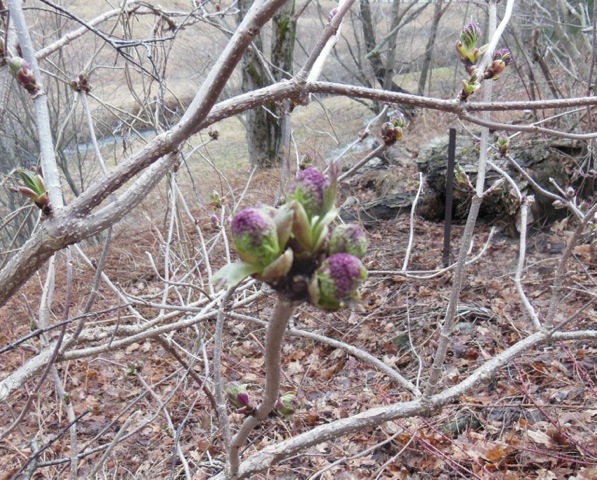 Mt. Washington — Along woodland trails, the roadside and in meadows and gardens maturing buds, exuberant shoots and radiant flowers surprise, arrest our eyes, reach for our hearts and enchant our spirits. And so do robins and phoebes that sing, feed and court in our yards. The air is alive with the flight and vocalizations of a myriad of other returning birds and awakened frogs. Like no other, the bird that arrives as winter turns to spring is one that shows itself when day fades into night: as twilight deepens, we listen for the woodcock’s nasal call and look for its whirling flight where wet meadows meet woods.

Trailside, voluptuous flower buds of red-berried elder (Sambucus pubens) amaze – looking like a well-endowed woman dressed in ornate finery. The shrub has the appearance of an escaped, long-cultivated garden specimen.

A wildflower at home in the cultivated landscape and in the wild, pale corydalis (Corydalis sempervirens), is one of the first flowers to bloom and the first to attract and feed hummingbirds. Rosettes of light blue-green, deeply indented foliage similar to Dutchman’s britches overwintered under the deep snow pack in my garden this year. Pale corydalis grows into a very delicate, branching 2-foot tall and wide plant that does not need a designated place in a bed. It is a biennial that seeds itself generously from year to year but is effortlessly uprooted where unwanted. Hummingbirds come throughout the growing season to its pink and yellow half-inch tube flowers. It is an ideal addition to flower and vegetable gardens and borders and does well in poor, compacted soil.

The garden has thrown off its snow blanket and frost-hardy vegetables are growing despite occasional nighttime temperatures in the 20’s when the top layer of earth freezes solid. In addition to the onions suggested in the Nature’s Turn column of March 2nd, it is time to plant leeks and shallots and to consider creating a perennial bed for Egyptian onions. Shallots are particularly beautiful for borders and wherever a row of small, low, dark green fountains of foliage would fit. The prized, edible bulbs that are harvested in August are an excellent storage crop. Leeks may be left in the ground through many frosts. Egyptian onions are fanciful top-multipliers that provide large green onions or scallions as a first garden harvest in early spring, at the start of the growing season. Also known as “walking onion,” a strong stem that carries bulblets appears in early summer. These may be pickled or planted to maintain or extend the bed. Another onion family perennial, chives, is a worthy edible for every yard and garden. Onions are widely regarded as deterrents to animals unwelcome in the garden.

A few frost-hardy and cool weather crops best be sowed in the coming weeks, even though it is hard to imagine a stretch of hot weather on the horizon. Lettuce, spinach, peas and radish germinate best in cool soils, although there are varieties that do well in warmer weather. Potatoes, parsnips, chard, beets, carrots, the cabbage family – including kale and collards – and other small seeded vegetables, may be planted now or later. The time required from sowing to harvest determines when to plant. Onions, potatoes and parsnips require a rather long growing season. I plant the cabbage family after these because they are frost tolerant in the fall and there’s so much else to eat all summer.

When white oak leaves are the size of mouse ears it’s time to plant corn – and squash and beans. More on this when we meet again.