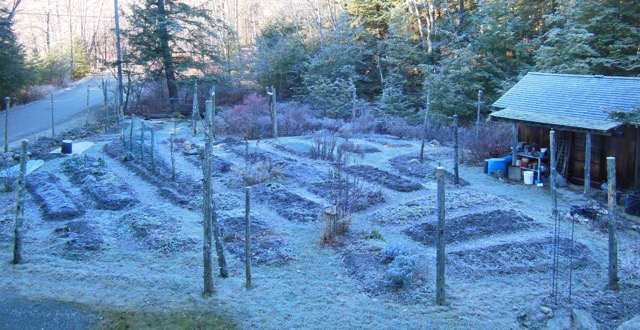 As the sun set over the hills to the southwest in the mid-afternoon of one of the first days of December, I retreated from the frozen garden, hands aching with cold despite gloves, arms barely reaching around an enormous kale plant I had wrested from its wrist-thick central stalk. I had to cover the distance of 100 feet over uneven ground to the house, hugging the unwieldy mass of great stems and flopping leaves, a vegetable gardener holding on tight to her trophy bird, to keep it from springing free. This was the last kale, a red Russian, to be pulled from its brassica bed, delivered to the pot for a brief sautee and then to the freezer.

The earth has alternately frozen solid and thawed to its friable, warm weather character. Brassicas – the hardy members of the cabbage family – have wilted, appeared miserable, then rehydrated and returned to their original vigor. Mild days allow us to weed and rake the earth of late-cleared annual beds, turn compost in and reshape them.

It’s a balmy afternoon, the 6th of December, and I just cut the last mass of dead, dried leaves and spent stems around a day lily at the head of an herb bed and a lady’s mantle that flowed over the edge of a vegetable bed. I bent to cut and clear away the remains of a season past to make way for the seasons ahead.

I finally designated a soft square of ground for the bucket full of flower bulbs that were dug up while weeding and dividing overgrown perennials months ago, and I saved the life of one of those perennials, a soapwort that languished in a pot, now heeled in before the ground freezes until spring. Letting go of the garden – and the garden letting go of me – has seemed imminent for weeks!

But the garden lives! Many frigid nights haven’t killed the carrots, parsley, parsnips, leeks, brassicas or lettuce. As the second week of December begins, I’ll cut all of the lettuce and arugula and pull the rest of the crisp carrots, a few meaty parsnips and leeks. I’ll leave the remaining parsnips and a few collard and parsley plants in the ground, covered with leaves and left to overwinter.

Yesterday, when darkness fell, I projected that I would begin to clear my desk and my office of piles of clutter that grew in proportion to my engagement outdoors during the growing season. But there in the vestibule lay several amaryllis bulbs I had found irresistible while shopping for bird seed. Still under Demeter’s spell, I headed for the garden shed to fetch a bag of potting soil, clay pots, shards to cover their drainage holes, and saucers. I’d vowed not to have more house plants, and there I was, overtaken with planting indoors! It’s a part of what gardeners do in December.