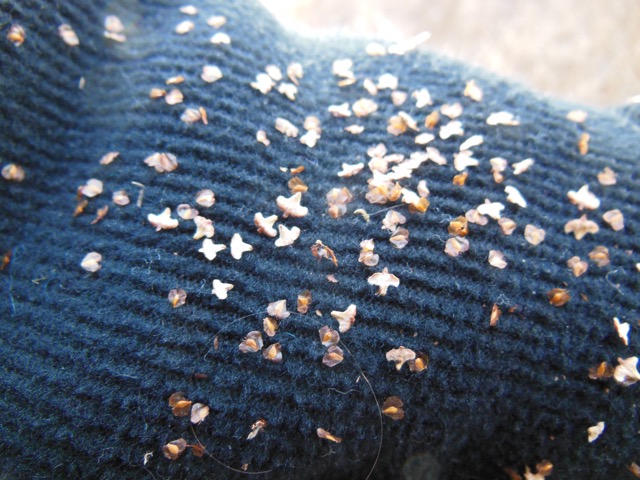 Mt. Washington — Winter walks in meadows, forests and along country roads – or gazing from the vantage point of the doorstep or moving car – reveal captivating features of the natural world particular to this season or not noticed when we are absorbed in the stimulants of spring, summer and autumn. Once we step outdoors it is not possible to get very far: intoxicants abound.

A thin covering of snow paints the undulating landscape, a white carpet tread upon by fox and squirrel, known by their impressions, their signature tracks. Ropey, branching, wavy traffic patterns are tunnels wrought by meadow mice, also known as voles. Little brown airplane shapes and tiny winged seeds are strewn over the bright ground, prompting me to look up to locate the source. As if drawn on the sky, bare twigs of a young grey birch are dappled with plump miniature cones, some partly disintegrated, accounting for the bracts (airplanes) and samaras (winged seeds) at my feet. Catkins – thin, tightly packed flower buds that extend from the ends of many of the twigs – gaily hold out the promise of next year’s seeds. Catkins of both white and yellow birches are grouped in threes at the ends of their twigs, and so look like the spread toes of birds’ feet throughout the crowns of those large trees.

Uniquely embellished, a small tree in a roadside swale seems to be gesturing to me. It looks as if someone affixed two-dozen wooden ornaments to the tops of its stems, or as if they are earth-colored fruits. I’ve seen random and sparse galls on trees and wildflowers, but nothing like this opulent collection. Galls are swellings on plant stems made by insects in which their young gestate; they are bug houses or nurseries. The small tree is a pussy willow and the swellings are pine cone galls that look like a community of castles shingled with scales (or bracts) like pine cones.

Have you noticed the amazing life forms trees support on and under their bark? Lichen and moss seem to be especially prominent on tree trunks now that it’s cloudy and wet and there’s little vegetation competing for our attention at eye level. Eager to learn about them, I showed a photograph I took of lichen and moss on a red oak to Mt.

Washington’s Hans Bergmann, a Research Professor of English and a lichen enthusiast. With every cautionary note about how difficult it is to identify lichen, let alone from a photograph, he reported that, “It is most likely, not certain, that the round lichens in [the photograph] are the Common Greenshield lichen, Flavoparmelia caperata……. This lichen is the so-called “40-mile-an-hour lichen” because it is one lichen that can often be identified easily, from, say, a moving car.”

I’ve since enjoyed lichen immersion trips as a passenger both in a car and on a train. I recommend it! If children – or adults who enjoy being enlightened – are along, be sure to ask them if they know that lichens came about because Freddie Fungus took a liken to Angie Algae. Fungi and alga have lived symbiotically as lichen ever since.