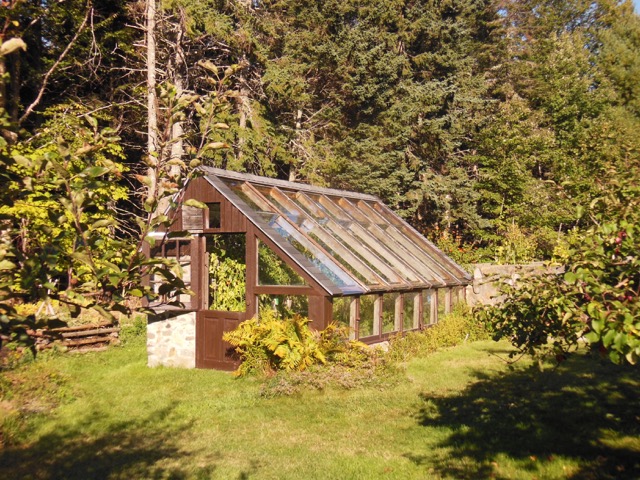 Mt. Washington — Ride the great wave of the winter season into the trough and out into the frothy light. As the pace of the sun’s return to the northern hemisphere picks up, our attention moves between reliance on the harvest of the growing season past to readying for the new year’s garden. Each round, red onion and gnarly Jerusalem artichoke; sweet winter squash and savory pickled cucumber feeds my body and spirit everyday. At the same time, pivoting toward the sun, I feel a thrill of awakening to the tasks to be accomplished in readiness for spring.

This year is different from other years. There’s a somber mood in America, a pervasive sense of betrayal, every day, of our formative values, of what constitutes well-being and respect for life. It is uncanny that a pilgrimage I took in September to the Good Life Center at Forest Farm in Harborside, Maine – the living museum and preserved homestead of Helen and Scott Nearing – would reveal as much about politics and civic responsibility as about living close to the land.

The Nearings have been called the grandparents of the “back to the land” movement of the late 1960s and 1970s. Their names swirled around gatherings of youthful seekers. They represented affirmation of abandoning conventional society, materialism and militarism. Like approving grandparents, they were role models in the unknown territory of self-reliant, rural life. Scott (August 6, 1883 – August 24, 1983) and Helen (February 23, 1904 – September 17, 1995) published guidebooks: my most referred to are Living the Good Life – How to Live Sanely and Simply in a Troubled World and The Maple Sugar Book – Together with Remarks on Pioneering as a Way of Living in the Twentieth Century.

If “affluence is not an end in itself,” what is there to do? “….to live at five levels: with nature; by doing our daily stint of bread labor; by carrying out our professional activities; by constant association with our fellow citizens; and by unremitting efforts to cultivate the life of the mind and spirit.” from Man’s Search for the Good Life.

In 1915, Scott Nearing was dismissed from his position as Professor of Economics at the University of Pennsylvania because of unrelenting social activism that exposed the abuses of established institutions. His books, that had been standard school texts, were dropped. His supporters mounted storms of protests. Significantly, in 1973, the University reversed Nearing’s dismissal and awarded him the title of honorary Emeritus Professor of Economics.

Scott Nearing’s biographer, John A. Saltmarsh, wrote, that Nearing “…..believed that unfettered wealth stifled initiative and impeded economic advancement, and hoped that progressive thinkers among the ownership class itself would come to realize the negative impact of economic parasitism and accept their civic duty of enlightened leadership. Nearing ….. outlined an economic republicanism based upon “four basic democratic concepts — equality of opportunity, civic obligation, popular government, and human rights.” (Saltmarsh, Scott Nearing, pages 31 and 38 from https://en.wikipedia.org/wiki/Scott_Nearing#cite_note-15*)

We are called upon to care for the Earth and our democracy. When we grow our own roots, greens, herbs, flowers and fruits – plying mostly with human-powered tools and ingenuity – we build body and spirit and contribute to the health of our world. A patch of fertile ground holds the promise of warding off ailments big and small and strengthening us to prevail through adversity.

Plan a summertime visit or apply now for a summer residency at the Good Life Center https://goodlife.org/

Procure a pocket copy of The Declaration of Independence and The Constitution of the United States, including The Bill of Rights from the American Institute for Economic Research, Great Barrington: $2 includes postage. Telephone 888.528.1216

Compelling photo-essay that documents the movement inspired by the Nearings: https://external.bangordailynews.com/projects/2014/04/goodlife/?chapter=root&amp;utm_source=bangordailynews&amp;utm_campaign=refer

2 thoughts on “NATURE’S TURN: Living the Good Life – gardening as a political act”