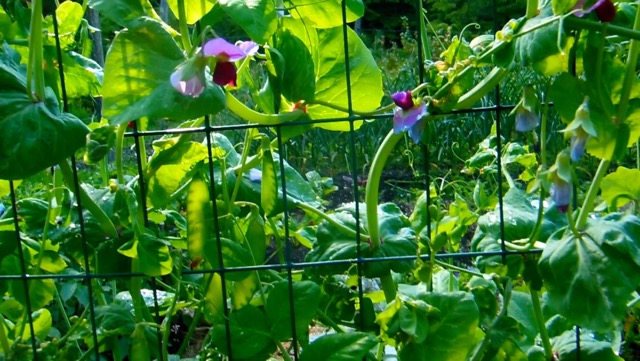 Mt. Washington — It seems counterintuitive that long-day onions, the best storage varieties, grow in northern locales and short-day varieties grow in the South. The South represents sunshine to us so it is jarring to realize that at the equator day length never exceeds 12 hours. Even in New York City days are a few minutes shorter than in the Berkshires. Onions planted during the third week of April seem full-grown; however, long-day varieties didn’t begin to bulb until day length reached 14 – 16 hours. Day length in Great Barrington reached 15 hours as June began and only recently has the characteristic bulbous swelling been noticeable at the base of the plant’s robust, round leaves.

Snow peas sown on May 6 have climbed to the top of their 5-foot tall trellis. The Turtle Tree Seed heirloom, Schweizer Riesen (Swiss Giant), is painted with fuchsia and pink blossoms giving it the appearance of ornamental sweet peas, except the plants are laden with edible pods that are harvested when 3 – 4 inches long. Lightly steamed, they’ve been called “candy” at our table.

Other spring crops – spinach, salad radish, arugula – have been thriving in the cool, wet weather and should be harvested as soon as full-grown. Leaf lettuces planted in April and May are best harvested completely, before becoming bitter. They keep well once refrigerated. In the Northeast, July 4 is the rough marker for the conclusion of the asparagus season. The spears are allowed to grow up into a ferny forest.

Sow seed for heat tolerant radicchio lettuce and Rainbow Swiss Chard now for beautiful, long lasting autumn harvests. Seeds for these, along with other vegetables that mature by the end of September (in about 60 days) may be sown in a bed designated as a nursery plot until other space is available. I’ve had particular success with summer plantings of bulbing fennel, turnip, beet and carrot for winter storage. Frost tolerant crops like kale are worth planting now, too.