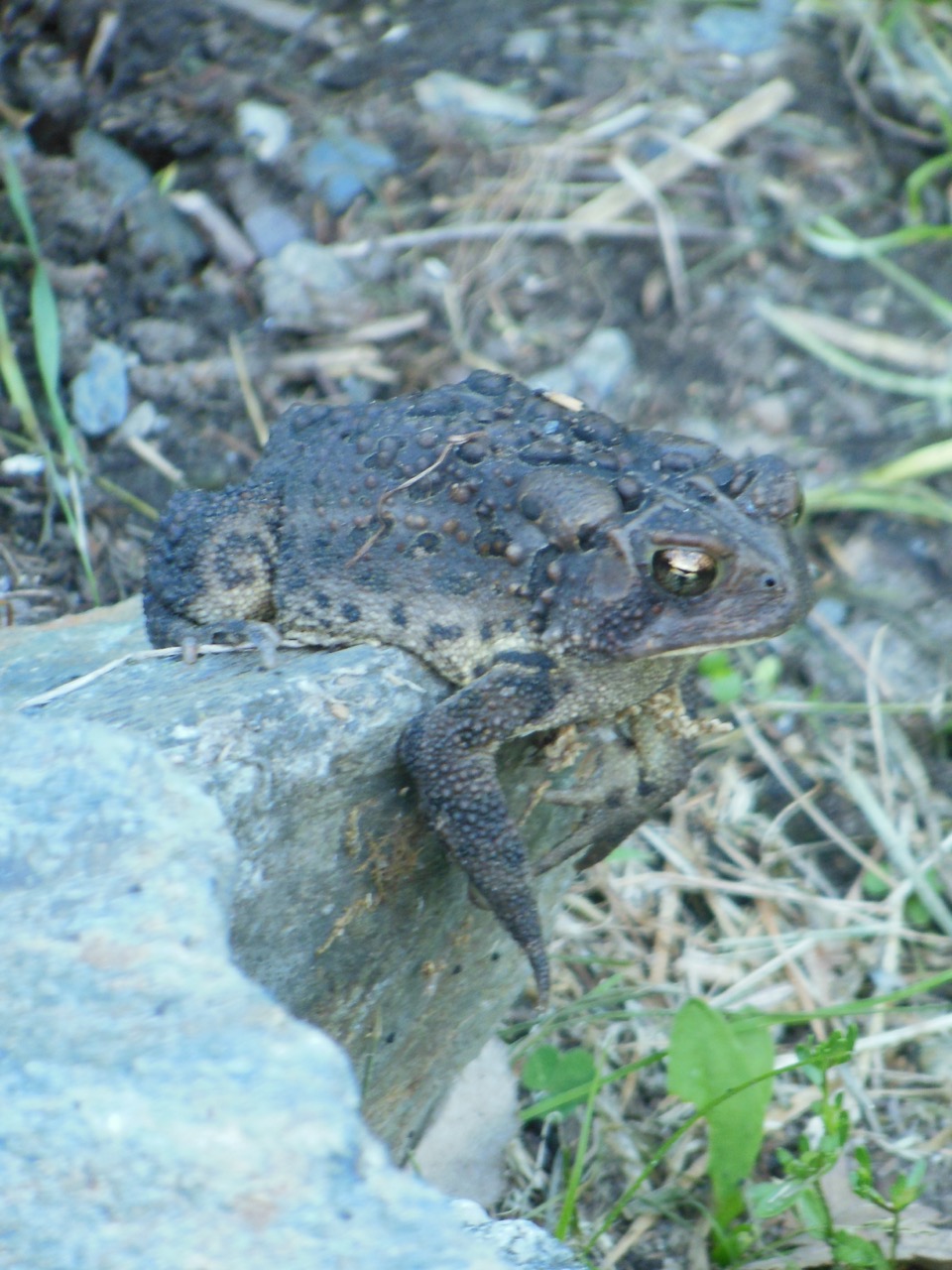 Toad actions are surprisingly interesting; one of my safeguards against the blues is the memory of the thoughtful way one of my pet toads rubbed and patted its stomach with its little hands after it had swallowed a June bug. Toads do not make warts upon attacking hands … The song of the toad is a pleasant crooning sound, a sort of guttural trill.

Mt. Washington — Soon after sunrise but before our daytime star climbs above the hills to the northeast, the bright but cool light and atmosphere of the early morning mirrors my refreshed and responsive mind and body, newly awakened from sleep. Anticipating the heat and intense sunlight of these, the longest days of the year, I was propelled into the garden to complete the shaping of a bed that I had begun the previous evening. From about 6 a.m. – 9 a.m. and again from 6 p.m. until nearly 9 p.m., give or take half an hour on either side, are most salutary for this gardener. Whenever possible I like getting outdoors without being compelled to apply the requisite sunblock lotion, insect repellent, and sunglasses.

I had vigorous summer squash plants to transplant, an unplanned purchase at Berkshire Co-op Market where Farm Girl Farm’s irresistible “Squash Patch” four-pack was in an outdoor display. I’d already sowed seeds of Black Beauty zucchini, but the plants were weeks ahead of my seeds and offered varieties I wanted: Costata Romanesca and Raven zucchini, Sunburst patty pan, and Early Summer Crookneck.

Is it ever possible, when entering the garden, to go directly to the task at hand when so many other works-in-progress and the dictates of the plants greet us? The soil was dry. The parsnip seeds I planted on May 18 and 19, two weeks previous, require regular watering until they emerge, especially because I soaked the seeds before sowing to shorten germination time and increase germination rate. With what was becoming a meandering trajectory, I carried the rake, hoe, spading fork, and soil amendments to the partly completed squash bed before picking up the watering can full of captured rain water and heading for the parsnip plot.

I drenched only the seeded strips: three strips, 20 inches apart, interplanted with radishes that did not receive water or doting upon. Parsnips provide year-round food whereas salad radishes are a fleeting flourish – although they will be doused if it doesn’t rain soon. Focusing on the water-darkened strips of ground, I discerned more of the characteristic opposite-leaved parsnip sprouts, spaced at 3- to 4-inch intervals, than the day before. It seemed that I was watching one as it emerged, as it pushed up its covering of earth. It occurred to me that, every year, I am so involved in their “gestation” period, coaxing them from underground and securing their survival until they can proceed on their own.

Parsnips are best planted in early to mid-spring, but cool weather is predicted for the week of June 6 and, although the ground has warmed, it’s the last chance to sow parsnip seed, if you’re willing to water morning and night.

I arrived at the summer squash bed delighted to recall, as if from a dream, the escapade of preparing part of the soil the night before. The bed had been covered with unsightly cardboard since the ground thawed, to prevent it from becoming a weed patch. When I lifted the covering at the end of the bed, a black layer of compost, spread in the fall, was revealed. Something moved. A toad hopped up onto a rock that had kept the cardboard in place. It balanced on the rock’s rim, a curious pose for a toad, and stayed there as I turned the compost into the soil. Toads were singing in the distance. Night was gathering.

In the morning light, my prince was gone. I finished turning the bed, dug four holes 20 inches apart, and tucked in the prized squash plants.

A note from Bridghe McCracken, Helia Land Design – Yes, that is the native sundial lupin on the front of my website https://helialanddesign.com/ We carry the lupin seed and lupin plants at the farm. The seed bank right behind the store also has a lovely display of it in bloom right now. Lupine is a key plant for the endangered Karner Blue butterfly. It grows best in poor rocky soils and is a terrific self-seeder. The leaves are shaped in such a way that they catch the morning dew and create a magical display of dew-beaded leaves.