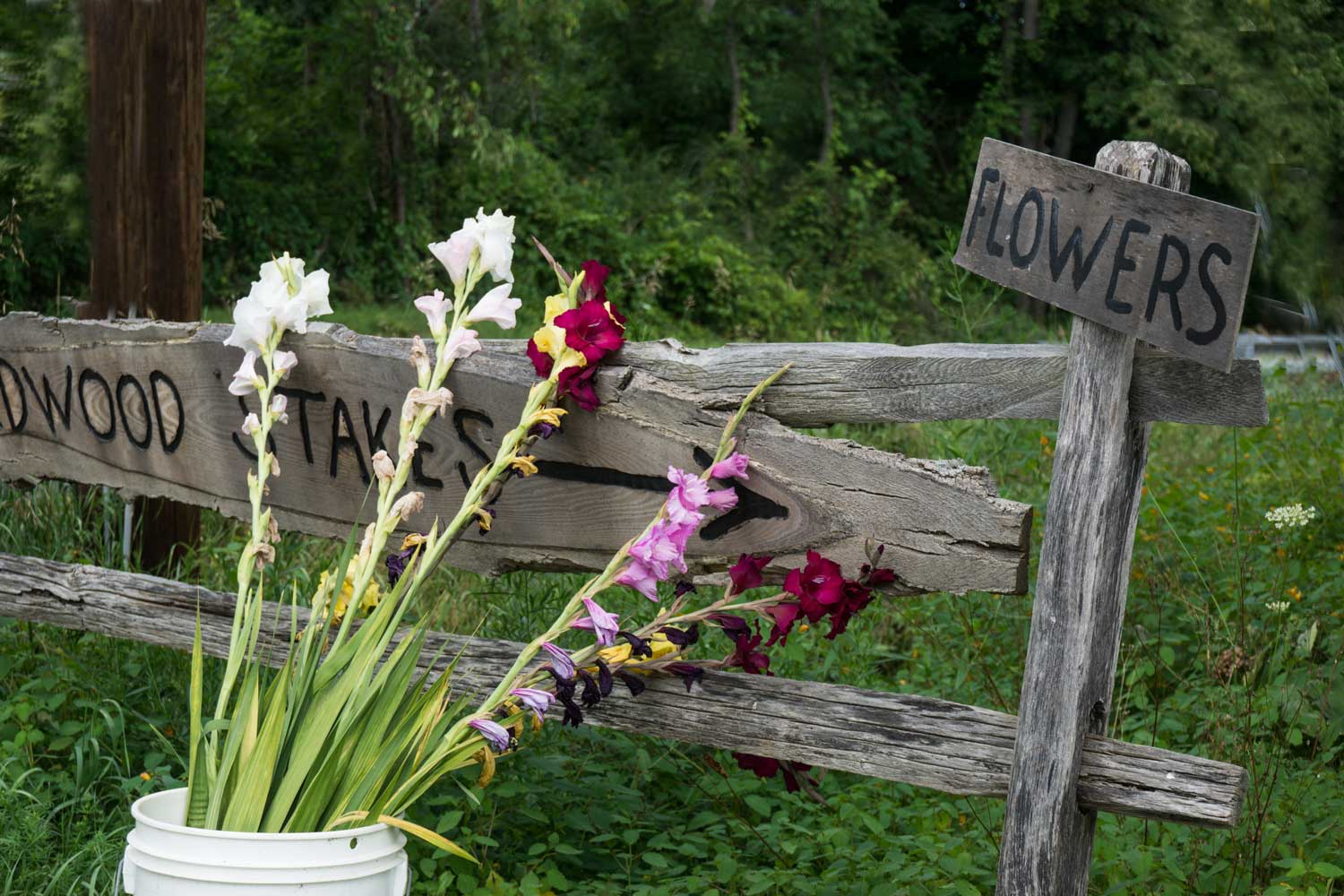 While taking my bike for a little spin on a recent cobalt blue sky Berkshire day, two very different gardens and one flower stand caught my eye. While I can’t keep from noticing gardens and plants currently in bloom, these drew me in. Quite different in function and plant material, they shared however a certain modesty that fit the setting.

After stopping by a flower stand featuring only gladioli, I made a vow to return with my camera in hand. (How many times do we make such promises and not follow through?)

Rushing home all sweaty, I switched my bike shorts for more comfortable ones, grabbed my new super light Sony “mirrorless” camera, hopped in our red Prius and headed back to Alford just down the road.

Alford, a pristine jewel of a New England village is a great place to go biking. It’s also known for its “loop.” I have a shorter version I take which today offered some very special spots to photograph.

Even though this may sound sentimental, I love how Alford has managed to maintain its identity, call it cachet, since the 18th century. With its perfectly proportioned, white steepled church, clapboard town hall and one room school house, it appears set in a time capsule. No gas station, coffee shop, post office or even general store.

Breaking the spell a bit, however, was a large RV that occupied almost each parking space in front of the cemetery. Oh well…I photographed the church once again for the umpteenth time.

More subtle reminders of the 21st century were the discrete signs with “Alford Broadband Initiative” here and there including one by the fire station. It’s a healthy sign of the times. Why wait?

But how does this relate to my garden ride? Well, there’s a new one almost right in Alford’s “downtown.” While whizzing by earlier on I thought for sure it was also a sign of the times: a community garden.

Here was a well-laid out vegetable garden with solid, wooden raised beds in the center of an expansive, well-mowed lawn. With no driveway, adjacent house, fence, or “Keep Out” sign, I simply assumed it was a community garden. And, like broad-band it was a message that “times they are a’changin’.”

Of course, Victory gardens were a staple during World War II. While they disappeared and lawns became the norm, over the past few years growing produce on empty inner city lots has taken off. For sure, this property is the antithesis of an empty city lot. In fact, over the years it was my impression that this lovely, oval-shaped land was a Town Commons that someone was carefully maintaining.

Today, a portion of it is now displaying healthy kale, chard, tomatoes, beans, nasturtium, and marigolds, among others. I wasn’t alone in my admiration when I overheard a biker saying “What a cool garden!” to his fellow biker.

Intrigued by it, I later learned from an Alford resident that it’s private. The good news is that mowing a lawn is no longer a priority today. Of course, some places haven’t caught up: growing produce on one’s front lawn is frowned on, even banned in certain fancy suburbs…

The next feast for my eyes was an expanse of black-eyed Susans. Their bright golden and black glory couldn’t help but make you squeeze your brakes and stare.

As I gingerly began to take photos from the driveway, I was kindly invited to the owners’ porch. There I shook hands with Nancy Van Deusen. Here was another moment of connection with Berkshire history: her family’s name dates back to the early Dutch settlers.

Standing by was her 7-year-old grandson. With a broad smile he soon was straddling a railing and then invited me to visit his fort while giving me a little tour of the magical garden surrounding it. As I was following him, Nancy said “I started this with four small pots.”

With its celebration of simply one flower species, a native one that attracts butterflies, I was reminded of making a point to visit each spring a lawn covered with swaths of crocuses in North Egremont.

Heading back home now I stopped by the gladiola flower stand on the Sweets’ tree farm. Now another image flooded me: taking our kids to cut a Christmas tree in the field. Today the choice was simply color. I picked some yellow, orange and peach gladiolas and left a few dollars in a slot. $1 per gladiola or 6 for $5. What a deal.

About an hour later, my husband David and I found ourselves in yet another world of flowers: The Berkshire Botanical Garden’s annual extravaganza the Fête des Fleurs. This year’s timing included their Grow Show featuring a flower arrangement competition judged by the Garden Club of America and sponsored as well by the Lenox Garden Club.

Here I was now sipping cold white wine and peering at fanciful flower arrangements sporting exotic South African Proteas, Tilandsias and red Ginger flowers. No Black-eyed Susans or gladioli in the arrangements but displays of perfect vegetables like the ones in our backyards made it quite a Berkshire event.