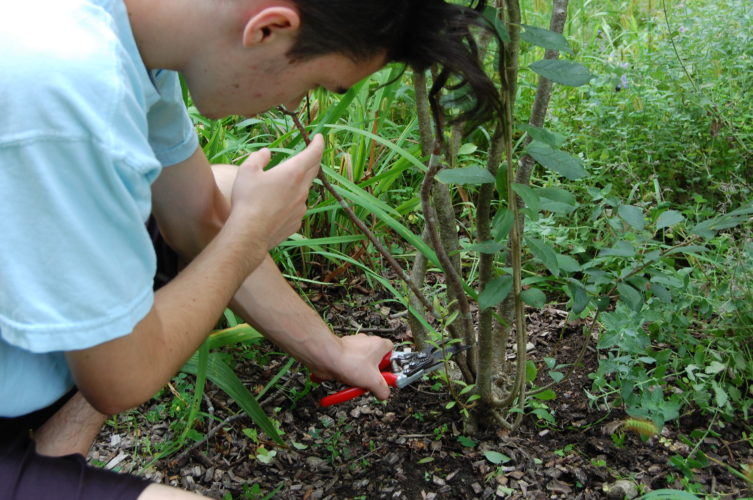 Pruning woody plants should be avoided now except to remove dead, damaged or diseased stems and branches.

* Dig and divide irises and daylilies. Since there are so many cultivated varieties of these two perennials, it’s great fun to trade them among friends. It’s also a good way to meet new gardeners: “Hi! I don’t know you and you don’t know me but let’s trade daylilies.”

* Divide hostas. Late summer is a good time to divide this garden favorite. Division can be done either by digging up entire plants and splitting the clumps into smaller pieces, each with some roots, or by slicing away portions of in-ground plants, again making sure to include some roots with each piece. Plant each division with the crown at ground level.  Do NOT bury the crown.

* Complete the seeding of new lawns or overseeding of thinned lawns within the next week or two. While seeding can continue into October, completing the task by mid-September is better for good root establishment of seedling grass. An extensive and deep root system is essential if the young grass is to survive the winter.

* Be conscious of rainfall amounts this month. Plant physiologists have found that the winter survival of trees and shrubs is highly dependent on the water they take up in September. So, be prepared to water these plants if rainfall is deficient. This is especially important for newly planted trees and shrubs.

* Stop watering amaryllis in preparation for its rest period. Allow the leaves to dry up; then cut them off about an inch above the bulb. Let the bulb sleep for about two months in a cool spot before resuming watering.

Since children eagerly read this column – or not – I probably should avoid using the “f” word. However, now that we are into September, the “f” word is often at the forefront of my mind. Well, what did you expect; there’s not much more going on up there.

Though we didn’t get one until October of last year, experience has taught me that once we get into September a frost can occur at almost any time. Yes, frost!  Children don’t like to hear the word because it means the beginning of the end of their summer fun. Gardeners don’t like to hear about it since it means the end of the growing season for some of our favorite crops, namely tomatoes, peppers, and beans.

I’ve long since given up trying to protect certain crops, such as tomatoes, from frost. Though covering the plants keeps them alive, the quality of the fruit deteriorates rapidly when exposed to cold, if not freezing, temperatures. I’d rather pick the tomatoes and let the near-ripe ones mature indoors or turn the green fruit into relishes or pickled tomatoes.

The average date of first frost in most of South Berkshire is September 20. However, keep in mind that “average” means there is a 50% chance of frost before that date and 50% chance frost will occur later.