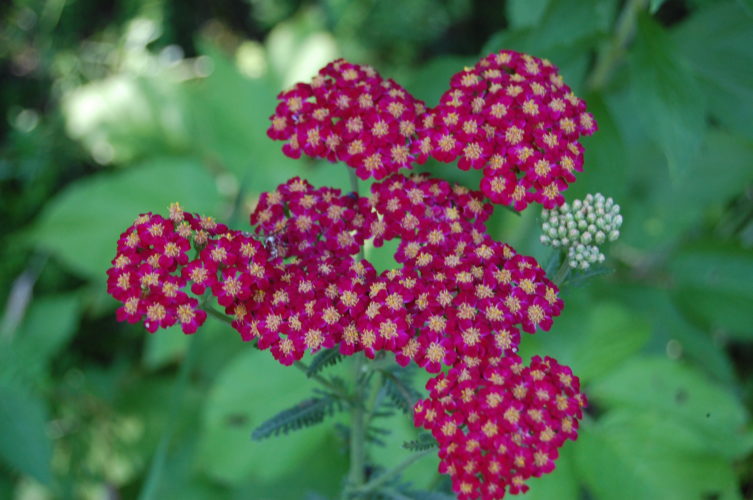 Modern varieties of yarrow such as this Achillea millefolium 'New Vintage Rose' are attractive additions to perennial gardens.

To do this week:

* Harvest stems of culinary herbs. Dry the herbs in shaded locations as opposed to drying in the sun. Not only do the herbs retain their color better but the essential oils that give herbs their particular flavor are better preserved.

* Don’t pull off the old pea pods that were overlooked during the harvest. Leave the pods on the plants, but pull up the plants and hang them in a protected location for several weeks until the pods are brown and thoroughly dry. Then, shell the peas and use for pea soup.

* Look for bean plants which have been sanctified, that is, made holey by Mexican Bean Beetles that have been feeding on the leaves and fruit. These beetles resemble ladybug beetles but are yellow to coppery-brown with black spots. Hand pick the beetles or apply neem oil to bean plants. Neem oil is best applied early in the morning or late evening.

* Withhold water from onions, shallots, and garlic now. The plants are rapidly reaching maturity as witnessed by the flopping of the plants and/or browning of the leaves. Too much water now will delay proper curing of the bulbs and could induce some rot or at least decrease their winter keeping quality.

* Make an effort to remove any blighted shoots from peonies and other plants in flower borders. The fungi that cause these blights will use the dead plant material as a beachhead for the development of more inoculum for future disease infections.

* Make some notes on this year’s gardens while the memories of early season successes or failures are still fresh in your mind. I’ve already made some notes of things to do differently next year. Now where did I put that little notebook……..

Isn’t it amazing how a little bit of knowledge and experience can change one’s attitude? In my formative years, I always considered yarrow to be nothing more than a common weed. However, the horticultural varieties are rapidly becoming favorites of mine. Yarrow or Achillea (pronounce it ack-ill-lee-uh), its botanical name, has many things going for it. The foliage, once despised because of too frequent appearance in my lawn, is quite attractive with its feathery or fern-like character. Its silvery gray color has a softening and cooling effect in perennial borders especially those ablaze with hot colored flowers. Yarrow produces flat heads of flowers held above the foliage and resembling miniature clouds. These come into bloom in late June and continue through the summer. I like to think my appreciation of yarrow is the result of increased sophistication as a gardener but, in truth, it’s the plant’s tolerance of neglect and poor soils that has converted me.