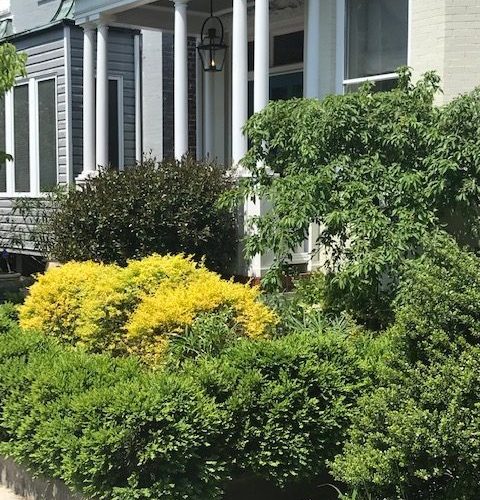 I was happy to see that the current owners of my former home in Richmond, Virginia, had maintained the essentials and the palette of my original garden design.

It is always challenging to visit an old home, but after a recent speaking engagement at Monticello in Charlottesville, I decided to visit another historic home — my own. For a period at the turn of the century (the most recent one, I am not that old), my then partner and I spent all of our time restoring an old rowhouse in the historic Fan District of Richmond, Virginia. As we restored windows and replumbed the house, rebuilding every wall within the 116-year-old house, I found respite from the endless hammering and plastering the same way I have often sought peace throughout my life: working the soil and planning a garden that gave me a sense of order — and a connection to a calmer life. Given the small spaces in both the front and the back of the house, I chose a simple, subdued palette of yellow, white and green to unify the space. We painted the house a color the designer Nancy Lancaster always referred to as “buttah yellah”

I was nervous as Fred and I turned the corner and the house came into view. As much as I know that a garden evolves and must move forward, memories are more stationary and I worried about altering my memory of this lovely house on which we had worked so hard. To my surprise, much of the front garden remained. The weeping flowering crab apple, with its white spring flowers that give way to small yellow fruits later in the season, had matured nicely. The old willow oak, which had been damaged by a hurricane, had been replaced by a gingko. And one of my favorite plants, that I was excited to grow in this zone 7 garden, was still extant — an edgeworthia or paperbush that bears yellow flowers with heavenly fragrance in late winter before its long tropical leaves emerge and cover its twiggy frame. A few yellow-leaved spireas had been added within the boxwood-lined border, but they kept to the scheme I had set and perhaps made up for the fact that the yellow Lady Banks rose that I had trained up the columns and front porch over our years at the house had been taken down. My vision was altered but not obliterated.

But, a glance through the side gate showed me a whole new reality in the back garden. A basketball net stood where an old dogwood had bloomed each spring. I then headed to the alley, to get a glance at changes there with the same interest that drivers have in catching a glimpse of a car crash along the side of the road. I hoped everything would be all right but feared that they would not. As I entered the alley, I saw many changes: the central garden that once stood in the middle of the back lot in the block, that had been so lovingly cared for by our friend Calder Loth, had been replaced by a large garage. In our own garden, the climbing hydrangea had been pulled off the back of the house and the old crape myrtle I had pruned into shape after long days of demo work inside was also missing. Life had moved forward and this house belonged to another.

But as Fred and I walked the alley, I was not overtaken by sadness, but by a much more complex emotion. A sense grew within me of how the world moves forward: evidence of the past remains and connects the past, present and future into a continuing narrative. For, in addition to the crabapple and paperbush in my old front garden, the alley was filled with plants that Calder had placed there throughout the years. When dividing perennials each spring from his back garden, he had lovingly set them throughout the small patches of earth along the sides of the alley. Southern maidenhair ferns, a few of which grace my garden in the Berkshires thanks to his generosity, sat beside cannas, oxalis and hosta. The white and green striped foliage of one of Calder’s signature plants popped up at various intervals and added the play of light and shadow to the alley. Up ahead was a shrubby green form covered in small yellow blooms. As I walked up to it, I discovered that it bore the butter yellow flowers of the Lady Banks rose. I wondered if Calder or someone else had done what gardeners have done for generations – had given a discarded plant a new home. I did not know if Calder still gardened here or if this was indeed my Lady Banks rose, nor did I know the fate of any of my neighbors from this moment in my past, but I knew that the memories that we had created here were still a touchstone to the past that will evolve over time in the retelling of this story and in my memory.

As I turned the corner and headed to a favorite old haunt for a Cuban breakfast with a friend, I passed a line of people queuing up to visit the gardens open that day as a part of Virginia Garden Week. The crowd was at once both familiar and foreign to me, from my own days of standing in such lines. It was as if someone had recast the actors playing the inhabitants of the neighborhood, and I found comfort in the fact that people and plants move forward together into a world that is at once familiar and unknown.