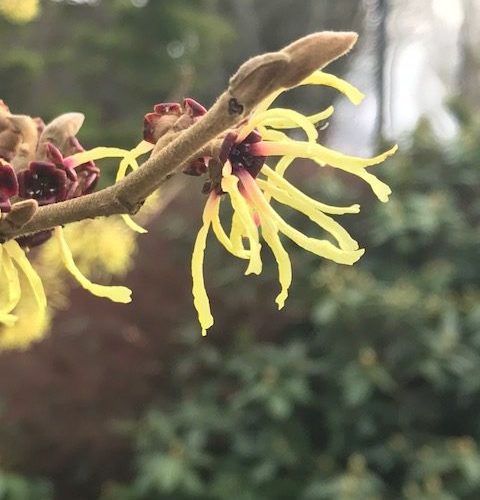 A trip out west to Oregon for a conference left me with more than just hope that spring is around the corner. On our way to the conference, my co-workers and I saw evidence of spring all around us – flowering rhododendron, witch hazels, hellebores and bulbs of various type were awash in color, and the greens of the moss on old hazels and cherries had that vibrancy that reminds me of those old posters that had a boldness that came alive under black lights. For me, living in Plant Hardiness Zone 5, this reminder of what lies ahead was just what I needed the week after Valentine’s Day. But, as we visited the USDA Agricultural Research Service station that rainy afternoon, something else gave me hope – the work that was going on inside.

For while nature did its magic outside, bringing the world into Technicolor, a collection of plants breeders and research assistants were working hard inside this complex to help us to see red. (Mysteriously, the only color I had not come across in the drive down, other than the bright red stems of some blueberries in a field along the highway. I will never understand why more people don’t grow blueberries as ornamentals – between their stems, flowers, fruit and fall color, these plants are as beautiful as any viburnum).

As we toured the facility, it was apparent that these intrepid scientists were working hard to remedy that lack of red, developing new breeds of a series of economic crops that are critical to the Pacific Northwest economy. Many crops, from hazelnuts to Christmas trees, are an important part of the local economy, but what captured my attention most was the work this office was doing with berries. Marionberries (named for Marion County, Oregon), developed at this USDA station, are a well-known cultivar of blackberries and, throughout the region, one sees signs lining the roadsides for pies, jams and berry-picking with this classic berry. The shelves of this laboratory, on the other hand, were crammed with labeled glass jars filled with tissue-cultured strains of unnamed berries that might one day unseat the Marionberry on signs across the state.

Managing disease is one of the major challenges for growers of fruits within the genus Rubus. Many of the varieties in commercial cultivation now will succumb to disease within three to ten years. If this happens, a farmer may need to clear fields and allow them to go fallow for a spell before introducing a new variety to the area. The hope is that the pathogens of any disease are minimized by a period of lying fallow. Many diseases are soil-borne and can reside in the soil for years. For this reason, developing virus- and disease-resistant varieties of berries is an important goal at this USDA ARS station, which is working in conjunction with the University of Oregon. By growing seeds in tissue culture, they are able to propagate and observe seedlings within their collection, and to develop and identify new varieties that may prove more resistant to disease. Finding a variety that will last ten years, rather than three, before succumbing to disease has a huge economic import for the growers in this region. In fact, it could be the difference between economically viability and going out of business.

Researchers toured us about and showed us the lines and strains they were working on, from crosses in the laboratory they were testing for disease resistance to seedlings in the greenhouse they were planning to field-test, it was apparent that the work they were doing had heroic ambitions. And these individuals were fighting for funding as well as for the plants themselves, as the USDA, which receives a good portion of its funding through the Farm Bill, is always up for scrutiny by Washington, despite the importance of its work to help keep crops like raspberries and blackberries on our tables for years to come. In a day filled with the first hopes of spring and the hope of seasons of berries for years ahead, my main hope is that these hardworking scientists receive the support they need. And I hope to see evidence of this in my cereal bowl on many a morning in the three to ten years that lie ahead.