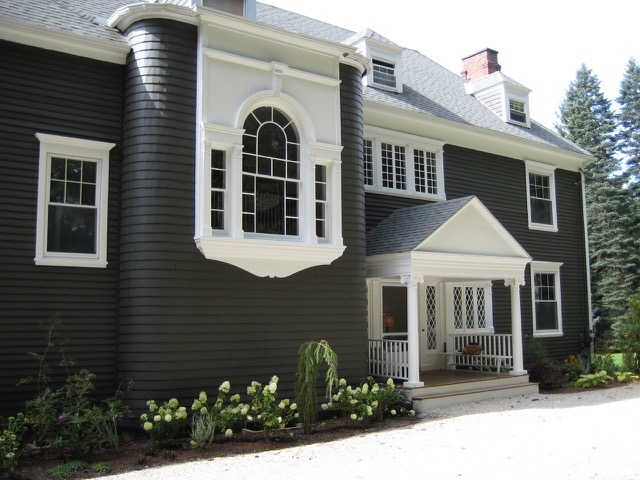 “When I find a colour darker than black, I’ll wear it. But until then, I’m wearing black!”

Fashion and architecture have long been compared in terms of proportion, style, trends, taste, and lines. So, it only makes sense that stylish homes are finally wearing a fashion-forward palette: Black is the New Black. Driving around the Berkshires in the past two years, I’ve noticed that more and more homes, barns and commercial structures are donning their formal wear for a sexy, strong, yet respectable statement in our verdant landscape…and I couldn’t be happier.

Although I’ve been designing ‘Little Black Houses’ for many years now, my connection to black’s appropriateness in architecture dates back to my childhood in Western Pennsylvania in the 60’s and 70’s. Living in rural farm country, we had a plethora of classic barns dotting the rolling landscape, and it was a tradition then to preserve those great wooden structures by coating them with creosote – the same oily substance used to preserve telephone poles. It’s hard to beat the beauty of the simple, gabled black barn set in green pastures.

However, the presence of black buildings extended beyond the farm. Our most beautiful in-town home was the Andrews Mansion. Sited in a tree-lined, lush stone-walled garden, its complex rooflines, terraces and hand-crafted windows were accentuated by a field of black-stained cedar shakes. This elegant structure always had a magnificence and a mystery about it to me, and I wanted nothing more than to live there one day.

My very first experience with a modern home was in the early 70’s, on the road to Clarion. Built by the man who owned the coal company that employed my father, it was a huge assemblage of single-slope roofs, hard angles, complex forms and oversized single pane windows. It too was sheathed in black. Set just on the edge of a parked-out forest and surrounded by tall, airy pines, it always drew my eye to its darkness, resonating with my budding architectural mind as “Just right.”

Both then and now, one of the many things I love about using black in building is that it pairs beautifully with everything. It creates a crisp, solid partnership with weathered cedar shingles, industrial galvanized roofs, rustic stonework or crisp white trim equally. It allows the colors of our Berkshire landscape and the intensity of our magical light to take center stage.

For the price of a few cans of paint, black can transform a ho-hum home into a showpiece. One of my favorite transformations is the home of Andrew and Tracey Zdziarski in Southfield. When we moved here in 1998, this house was the first thing you saw as you climbed the knoll into our historical one-street town of period homes, churches and the sprawling Buggywhip Factory. This out-of-place ranch house was stained muddy brown at the time… you know that ubiquitous country color that hovers somewhere between faded redwood and baby poo. You still see its nondescript, noncommittal hues of yellowish/pinkish/brownish blah here and there in our area.

After the Zdziarski’s bought it in 2008, they consulted with me on the idea of going dark. They were nervous about going “all-the-way-black” and thought a mid-tone shade of gray may be safer. Maybe it would have, but I encouraged them that a matte black stain would transform the house into one with architectural significance… its low-pitched rooflines and elongated front porch took on a mid-century elegance that glistens against the lawn and the dappled light of the trees and provides the perfect backdrop for the row of hydrangeas that Tracey envisioned. Today, it’s generally agreed upon by the residents of Southfield that if we had a Beautification Award to bestow, Andrew and Tracey would win.

In transforming another ranch house eyesore in Southfield, we swapped out the butter-yellow vinyl siding and eggplant trim with cement board siding from James Hardie in their darkest available hue — Iron Grey. Not only is this material cost-effective, rot and critter-proof, but its color technology has a 15-year warranty. Try to get that from your painter! We used a board and batten installation technique to change the roadside of this ranch into a farm outbuilding aesthetic, adding a galvanized metal roof, Pella Architect series windows in Iron Ore and natural timber accents for warmth. What once was a drive-by house is now a show- (and sometimes passing car-) stopping home.

My first new “house in black” (back in 2004) is now affectionately referred to as “the garage,” after the always outspoken Ramona Singer of Real Housewives of NY fame dubbed it upon her first visit to the Berkshires. The house was actually designed as a pool house – Phase 1 in what would be a multi-year build-out of a complex of pool house, pool, barn and main house, set on a hillside with a lovely view of Catamount. After master planning the site with Jonathan Schindler and Heather Thomson (also of RHONY fame), we started construction on the first structure – the pool house, just as Heather was about to deliver their first child. The pool house has a petite 1,500 square-foot footprint, but was custom-designed with a two-story glass wall to capture the view, an industrial steel grated walkway overlooking the living area from a media loft, multiple bedrooms, a kitchen and 2 1/2 baths.

As we explored construction possibilities, we decided to have the house “pre-cut” by Deck House. They followed our plans and delivered flatbed trucks loaded with huge pre-insulated panels, pre-engineered wood beams and, most importantly, windows and doors that were upgraded to teak. As we finished the exterior with black-stained vertical siding, we left the windows and roof structure natural wood, giving the house a balanced palette, complimented by its galvanized metal roof — again, appropriate here as the eventual relationship between this structure and its future mates would be that of a farm outbuilding.

Going dark isn’t just successful on rustic country structures either. When Chan Gibson and Cynthia Wick decided to pull out of the Hollywood rat race and raise their children in a healthier setting, they found one of the original Berkshire cottages in Lenox called Deepdene. Although it seemed fully renovated, I was asked to convert the third-floor servants’ quarters into a painting studio for Cynthia, a writing studio for Chan, and guest rooms. The impressive house was clad in a dusty pale sage at the time and it just sort of disappeared into the landscape. The color, though fine, did nothing to accentuate the magnificent trim, cornice detailing and windows. We decided on a new, near-black hue from Benjamin Moore called Dragon’s Breath and the transformation began. Deepdene has a lot of trim, which we chose to keep white. This includes a large two-floor porch facing the back yard which we rebuilt and fitted with interchangeable glass and screened panels to extend its utility. The dark body of the house now lets the “jewelry” of the house shine, along with the gem-toned forest that surrounds the house’s facade.

Recently, I was called back in to add a ground floor painting studio for Cynthia so she could begin to work on larger pieces, unlimited by the confines of the attic space where she’s been working for years. We opted to add a 20’ x 32’ naturally lit structure to the far end of the house and connected it via a breezeway through a panty and into the kitchen. We changed the siding from horizontal clapboard to a board and batten, but maintained the Dragon’s Breath color to both harmonize with the house and let the studio stand on its own right. The location of the studio created a pea-stone courtyard off the kitchen bay window, now strung with festival lights that is perfect for entertaining. It also engages the interior of the house into the landscape and adjacent forest, which is so important to Cynthia’s work.

As an architectural designer, I would be a hypocrite if I didn’t explore this rich color statement in my daily life. I was raised to believe that you should practice what you preach, so several years ago we started to swap out the barn-red and Berkshire blue hues of our 110-year old home’s appendages to a Benjamin Moore shade called Black Beauty. Set against the natural cedar clapboards, copper roofs and reclaimed barn beam porch framing, black has brought sexy back to our property all year long. Not satisfied there, last year we painted our small dining room black. As a result, the walls recede and the room now has the architecture, drama and panache it was missing for far too long.

There are many ways to use shades of black to accentuate the good parts of your home and diminish the mundane. The options in paints, stains and pre-colored siding options have expanded and new materials are coming on the market daily. The one that most excites me is called Sho Sugi Ban, an old Japanese technique of preserving wood by burning its surface. It seals the cellular structure while providing a shimmering charcoal tone that is reportedly maintenance-free. So far, I’ve only been able to use it for interior applications, but now have a new home that will start construction this fall that is using it extensively around the entry tower. So stay tuned for more black exteriors and interiors from RhDesign. You know what they say, “once you go black…”