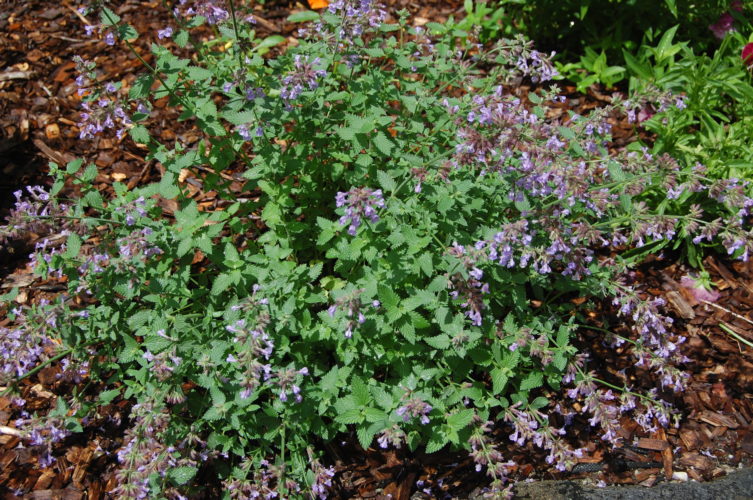 As the flowers of catmint fade, the plant should be pruned back to at least half its height to maintain its compact form. Pruning will also prompt the plant to re-bloom later in summer.

To do this week

* Sucker tomatoes that are tied to stakes. Suckering refers to removal of new shoots that arise at the base of tomato plants and most lateral shoots that appear in leaf crotches. Two to three of the lateral shoots above the lowest flower cluster are often left on the plant in order to increase the number of tomatoes produced. If growing tomatoes in cages, limited suckering may be done simply to allow for better air circulation around the plant. Better air circulation can help reduce incidence of disease such as early blight.

* Spray tomatoes with a copper-based fungicide or a biological fungicide such as Serenade containing the bacterium, Bacillus subtilis, when the first symptoms of early blight are seen.  Brown, concentric-ringed spots resembling a target, first appearing on lower leaves, is the primary symptom of this disease. Early blight develops rapidly at this time of year, so plants should be checked every few days for symptoms.

* Check plants, especially vegetable crops, daily for evidence of pests. Controlling pests is much easier if done while population levels are small. Pests to look for now include slugs, squash vine borer, bean beetle, and Colorado potato beetle. Handpick the beetles and mail them to Colorado.  Hmm…better not, it’s against the law to mail live insects.

* Cut some floral stems from astilbe for use in flower arrangements. Harvest stems when flowers are half open. Immediately place the flower stems in warm water to which floral preservative has been applied. In fact, this is good advice for handling any cut flower

* Cut catmint back by half its height or lower after plants have completed their bloom. This seemingly harsh treatment rejuvenates the plants and should result in repeat bloom later this summer. Such pruning also keeps the plant compact and attractive.

* Make another sowing of cilantro (coriander). Plants from the early sowing are now flowering or will be soon, after which they set seed.  Since I like to grow cilantro for the leaves, additional seed sowing through the season is necessary.  Also, sow another crop of dill for their tender shoots. Let a few plants of cilantro and dill go to full maturity as they will self-seed, giving a free crop next year.

* Take a stroll through the garden during the next rainfall, which shouldn’t require a long wait if recent weather patterns are any indication. While a walk in the rain may dampen your shorts, it will not dampen your spirits. Plants appear more vibrant and lush on a rainy day than on a hot and dry day. I especially love the way leaves of certain plants, such as lady’s mantle, capture and hold droplets of rain, much like polished gems.

A pile of compost, a pile of wood chips, and a bag of poultry grit; these are three items that I find indispensable to my gardening efforts.

The purpose for the compost is quite obvious. It is an essential soil amendment. I incorporate compost into garden soils and potting mixes.

The wood chips are used primarily as mulch for woody plants in the landscape. However, I typically allow wood chips to decompose for a year or two and then sift them through a half-inch mesh screen. The small particles passing through the screen make very attractive mulch for flower gardens. The larger pieces are good for mulching trees and shrubs, and make a natural surface for garden pathways.

The purpose of the poultry grit may not be so obvious, but it has many uses. I work it into garden soil for certain plants that need exceptionally good drainage, e.g., lavender. It also makes good mulch for lavender, Osteospermum, and other plants that don’t like to get their crowns wet. In addition, I place a layer of pea stone on the surface of soil in container gardens.  The stones keep soil from being washed out when I get overzealous with the watering can. Poultry grit can be found at farm supply stores. 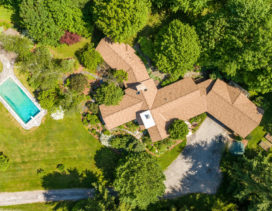 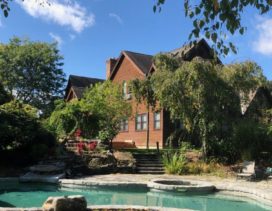 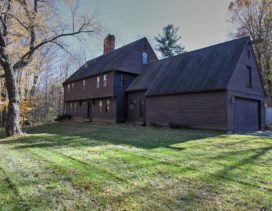 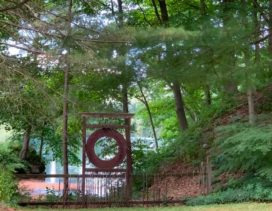 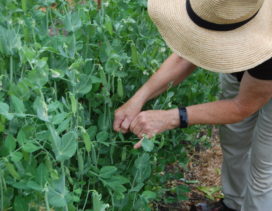 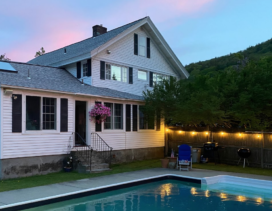