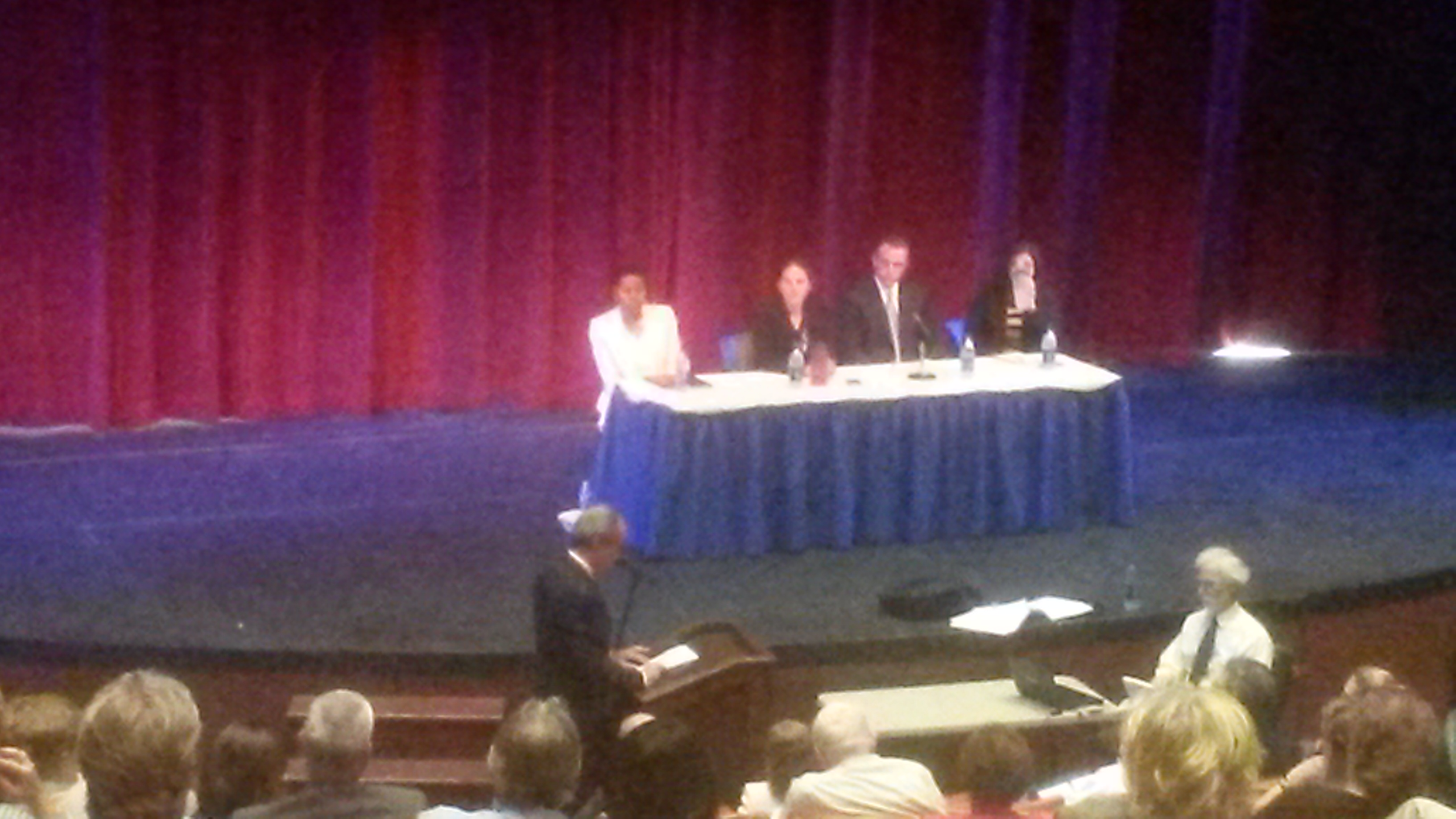 Pittsfield — Elected officials, business representatives, facilities directors, working-class advocates and environmentalists were among the range of people speaking out Tuesday night (August 1) against a proposed electric rate hike requested by Eversource Energy. Concerns voiced at the public hearing at Berkshire Community College included excessive returns to Eversource shareholders at ratepayers’ expense, unreasonable cost burden on Berkshire businesses and nonprofits, and a complicated performance-based rate mechanism that would add additional rate increases over the next few years.

The current rate case before the Massachusetts Department of Public Utilities centers around Eversource’s request for a $96 million increase in revenue, filed in January 2017. The company has since revised its request in an attempt to lessen the rate increase impact on Western Massachusetts customers. The revised rate proposal was filed on June 1.

Under the initial rate design, customers in eastern Massachusetts – NSTAR Electric service territory – would get a 7 percent increase equating to an additional $60.2 million in revenues, while customers in western Massachusetts – WMECO service territory – would see rate increases amounting to a 27 percent boost, or an additional $35.7 million over current operating expenses.

Eversource filed its revision following public outcry, particularly from WMECO customers unhappy with the rate increase distribution as originally proposed. An April DPU hearing set an attendance record. The revised proposal shifts some of the requested additional revenue from western Massachusetts to eastern Massachusetts customers. The increase from WMECO customers is trimmed down to $22.5 million, meaning that approximately $13 million would be saddled onto NSTAR customers. The total amount requested, $96 million, has not changed. Eastern Massachusetts residents were to comment on the revised proposal at a hearing on Wednesday, Aug. 2, in West Barnstable.

Eversource insists the rate increases are justified and necessary to recover expenses it has already paid. The company seeks to implement the increases in two phases, one beginning in January 2018 and the other starting January 2019.

“We’re currently operating at a revenue deficiency,” Ed Davis, director of rates for Eversource, explained at the Tuesday hearing. He said the company is seeking additional revenue to recover costs it has already paid on system upgrades and reliability improvements. He also reminded hearing attendees that, under the revised rate design, commercial and industrial customers in western Massachusetts would get smaller rate increases than they would as originally proposed.

Still, the people and elected officials of the Berkshires were not buying it.

“The overall increase is far too much for ratepayers,” said state Rep. Tricia Farley-Bouvier, D-Pittsfield. The $96-million revenue increase, she pointed out, includes a 10.5 percent return on equity for shareholders. She compared the outlandish salary of Eversource CEO James Judd to the average per capita income of Berkshire residents. Judd earns nearly $25,000 per day, which is in the ballpark range of what many county residents earn per year. “What I’m trying to say here is the company, its shareholders, they are getting along just fine,” she said.

Sen. Adam Hinds, D-Pittsfield, similarly criticized the utility’s rate-hike proposal. “As we try to create an environment where the Commonwealth is positioned for continued growth and job creation, a rate increase that significantly undermines that effort for the benefit of shareholders is simply unacceptable,” he said.

The proposal also drew scrutiny and opposition from the Massachusetts Attorney General’s Office, which advocates for ratepayers in these kinds of cases.

“We’ve concluded that the company’s $96 million increase is unfounded and not in the best interest of ratepayers,” remarked Elizabeth Mahoney, assistant attorney general in the Office of Ratepayer Advocacy.

Large businesses in the area, typically larger consumers of electricity, were particularly adamant in their opposition to the proposed rate increase. Representatives from Onyx Specialty Papers and Crane & Co. – two remaining paper mills in the county – testified, explaining the impact this rate hike would have on their operations. According to Brendan Ronayne, senior finance manager for Crane & Co., the company faces a $100,000 increase in electrical costs under Eversource’s proposal. He further explained that the company is currently in a 5-year, fixed-price contract to supply paper for U.S. currency and this increase would diminish the company’s ability to invest in its people and in infrastructure.

Jonathan Butler, president of the business association 1Berkshire, remarked that, even under the revised proposal, large business customers would see electric rate increases of up to 25 percent. “During a time in which our regional economy is struggling to recover from decades of dramatic economic transition, this overall rate proposal is an unacceptable burden,” he said. “As the voice of the Berkshire business community, we ask the DPU to reject this revised proposal.”

Jane Winn of Berkshire Environmental Action Team pointed out the rarity of those moments when environmental groups are on board with the same demand as other kinds of organizations such as industry and business associations. She strongly criticized the rate-hike proposal, repeating the concern that Eversource executives and shareholders would unduly benefit.

The DPU is expected to make a decision on this case before the end of the year. Written comments from the public will be accepted through the end of this month.