Radical anger in America: How Trump has changed public discourse — and Politicon

Pasadena, Calif. — I’ve only seen one “Make America Great Again” hat in the Berkshires. When I traveled to Pasadena, California, last weekend, I saw hundreds of them.

I flew to the West Coast to attend Politicon — basically Comic Con for people who are passionate about politics. It was my second year there so I thought I knew what to expect: smart panelists from both sides of the aisle engaging in civilized debate in front of an enthusiastic but polite audience. As Hi in the movie “Raising Arizona” says, “Those were the salad days and I had a premonition that they weren’t coming back.”

As I entered the Pasadena Convention Center, I was greeted by a mob of college students adorned in blazers wearing gold ties and red Trump hats. It was 102 degrees out. The students were in line to hear Ann Coulter, a New York Times-bestselling author and popular right wing pundit, talk about censorship on college campuses. I asked one of them about his support for the president. A sophomore at University of California, Santa Cruz, who wished to remain unnamed, he said, “I think we need to give Trump a chance; the reason he hasn’t been able to do anything is ’cause the Democrats keep being obstructionists. I have confidence that he will get past that, though, and will build the wall.”

The line for Ann Coulter trailed almost two city blocks around the convention center and, when she took the stage an hour later, she was greeted with applause worthy of a rock star. The discussion began with an unexpected admission. Coulter said that “I have lost a lot of faith in Trump. During the campaign I thought he was our guy, but he really hasn’t carried out on what he promised.” Then the conversation turned toward immigration, a topic Coulter has written extensively about in her book, “Adios America: The Left’s Plan to Turn Our Country into a Third World Hellhole.” When asked about her stance on immigration, she gave a peculiar answer: “I think marijuana makes people retarded. Illegal immigrants smoke the most pot. But nobody ever went to jail for smoking pot.” A few Trump supporters in back cheered while the rest of the audience sat back in disbelief.

About half of the audience members were wearing Trump t-shirts and hats. Each time somebody on one of the dozens of panels talked about improving public education or said a kind word in reference to immigrants, they stood up and booed loudly. I had come to see the talent speak, but most of what I heard were boos and cheers. At one event, tensions among audience members became so heated that two men who had been yelling at each other stood up. A fight broke out as one of them attempted to punch the other. Ultimately they were both kicked out by a security guard who was sweating profusely. The officer said he had been “on edge” the entire event. 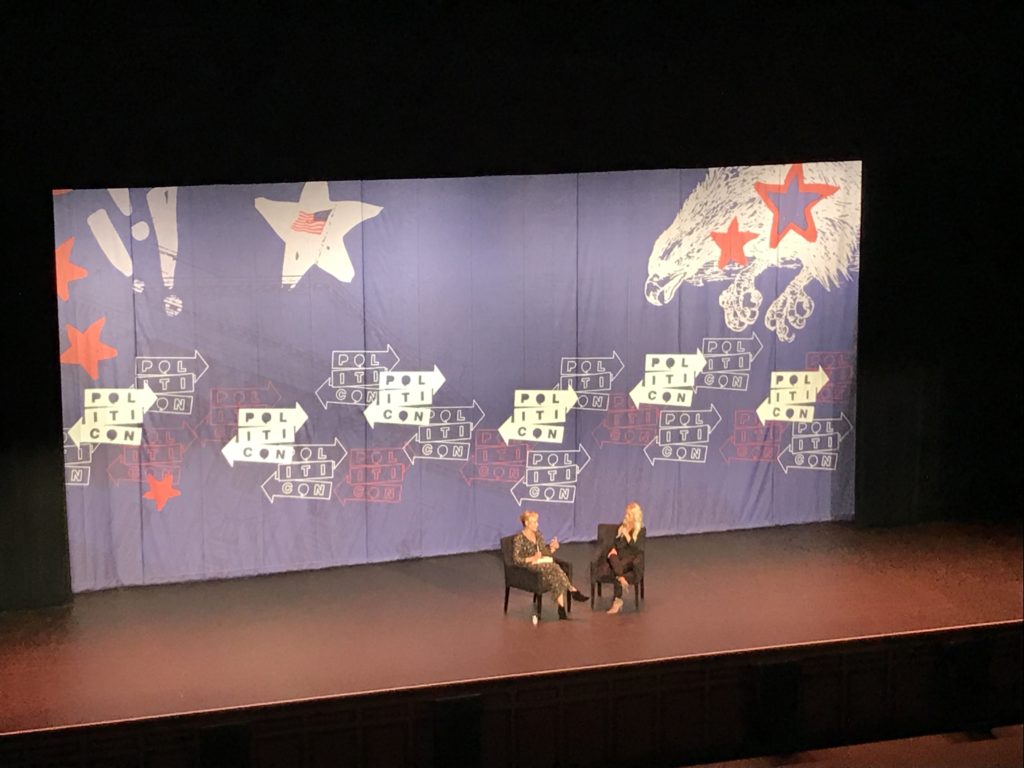 The most memorable event was the conversation between Chelsea Handler, the host of “Chelsea Does” on Netflix, and Tomi Lahren, a popular conservative commentator who formerly hosted an online politics show on Glenn Beck’s TheBlaze. The conversation started out civilly. Lahren began by telling the audience about growing up in a military family in Rapid City, South Dakota. Then Handler posed a simple question to her, “Do you have a healthcare plan or no?” “Well, luckily, I’m 24, so I’m still on my parent’s plan,” Lahren said. Many in the auditorium roared with laughter, finding the remark comical given Lahren’s earlier condemnation of the Affordable Care Act.

Realizing she had made a gaffe, Lahren hurried to pivot the conversation toward her alleged strengths: immigration and political correctness. When she spoke about the dangers of public education and the need to end affirmative action, her misstep was immediately forgotten by the Republicans in the audience and she became their hero once again.

Lahren was once a rising star on the right: She is young, attractive, coherent in her speech and loves to call liberals “snowflakes.” But as Marc Gerard, a restaurant operator in Pasadena, told me as we exited the auditorium: “She only fell from grace because she was pro-choice; they got rid of her because she wasn’t radical enough. That’s a bad sign for America.”

Stepping into a hall full of even more Trump hats and young Republicans shouting, “U.S.A., U.S.A.,” I couldn’t help but feel that the political scene at Politicon had changed. Sure, there were plenty of Republicans in attendance last year, but they didn’t advertise their hatred or bigotry and they certainly weren’t applauded for it. Before each panel I had to stop at the door to remind myself that this isn’t normal.