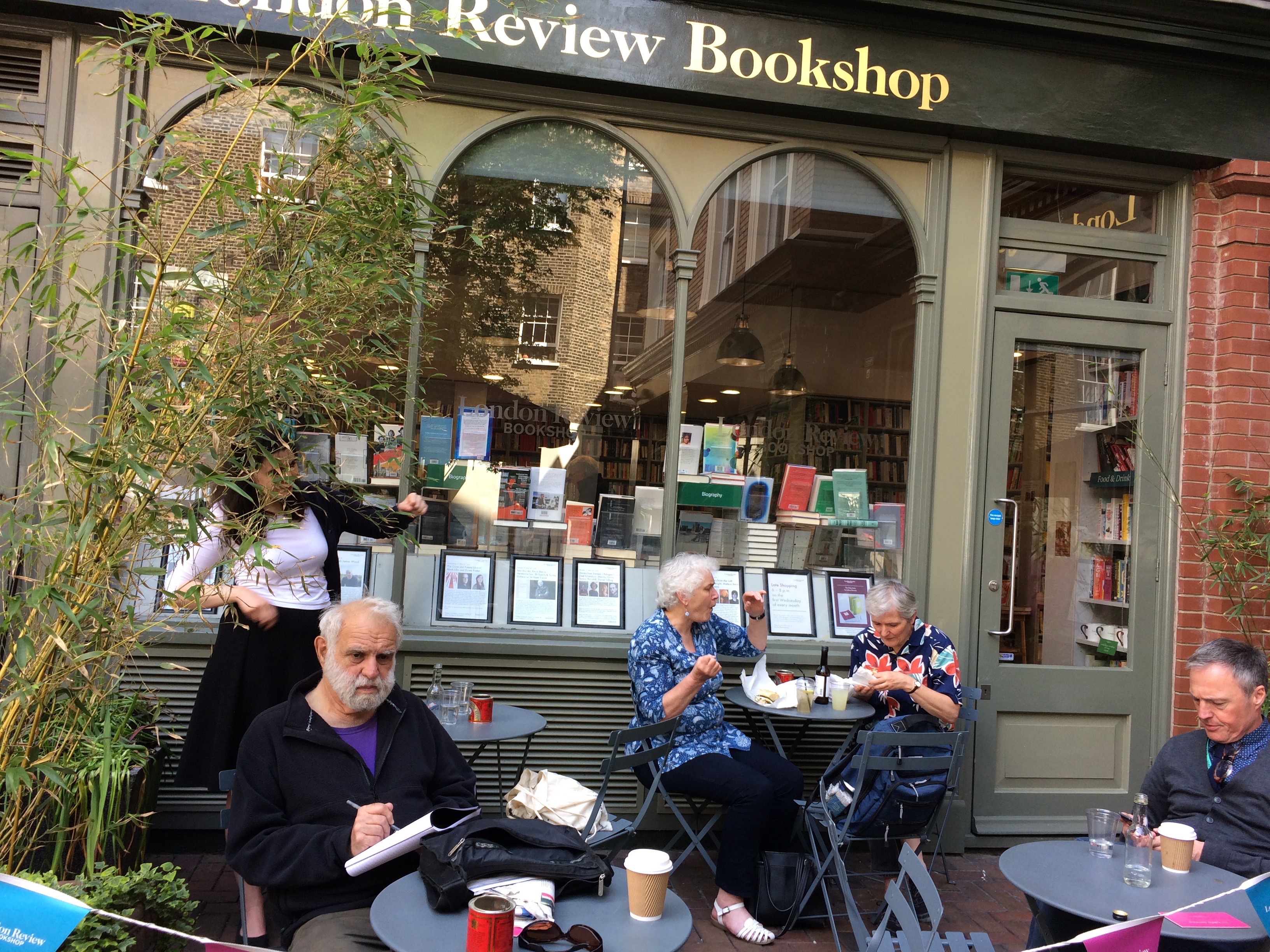 That author, at left, writing in the courtyard

My annual trip to London was different in kind from the ones that I took the last seven years. This time my wife accompanied me, and we stayed in a hotel rather than my being generously put up by a friend. This trip was less about visiting people and attending the latest plays than about returning to our past haunts that left such rich, indelible memories from the years we lived in London on sabbaticals, university leaves and summer breaks.

The hotel we stayed in — a comfortable but not expensive one — was in Bloomsbury, utterly central and convenient to buses that could take us to a variety of neighborhoods and museums we planned to visit. But the two- and three-star hotel-dominated street it was located on was packed with tourists trying out every conceivable fast food and café chain that lined the street from Pizza Express and Caffé Nero to Subway and Starbucks. It had the added delight of continuous traffic jams and pollution, and homeless men sleeping in doorways in the early morning surrounded by empty bottles and containers — nothing ominous, but utterly seedy. Still, the hotel was close to the British Museum; a large, very green and leafy Russell Square; and to the London Review Bookshop — a well-stocked and well-selected, independent literary shop with a café selling kale salad, with outside tables in a lovely courtyard. (London is worthy of respect for its commitment to book culture. It still contains a wide range of antiquarian, second-hand, independent, and chain bookstores.)

My wife is a painter enamored with color, so we visited a number of London’s art museums. The National Gallery had a stunning exhibit on Monet and Architecture — paintings less interested in the structure of buildings than in the play of light, atmosphere, and weather around them. Our two most noteworthy museum visits were to The Courtauld located on the Strand, and which contains a superb permanent collection that includes Fauvist works by Derain and Vlaminck, a Walter Sickert nude, and great paintings by Manet and Cézanne. (The Courtauld holds the most important group of works by Paul Cézanne in Britain.) The other visit was to Tate Britain where the All Too Human exhibition celebrating the painters in Britain who aimed to represent the human figures from a variety of aesthetic and psychological perspectives is running.

It features two major British artists, Lucian Freud and Francis Bacon, whose work is seen often in the U.S., alongside much less exhibited work from their contemporaries including Frank Auerbach and R.B. Kitaj. The exhibit also displayed some artists and paintings I had never seen before, and it’s good to see figurative painting alive in the U.K. (my bias), rather than one more installation or conceptual art show.

Of course, we did more than go to museum exhibits. Much of our time was spent on the move, in my case sometimes hobbling but usually both of us walking slowly, to visit parks like Regent’s and its lake with herons, ducks, geese, swans and coots.

We sat serenely on a bench reading The Guardian and watching schoolchildren racing about and constructing human pyramids, tourists speaking a babel of languages, mothers and nannies pushing carriages, and two religious elders from the nearby Regent’s Park Mosque smiling and totally beguiled by a mother and her ducklings walking on the grass.

We also went to Chelsea and Sloane Square where we ate lunch at a decent French bistro, which was part of a chain that has made eating in London a vastly more pleasurable experience than when we first arrived in the 70s. Chelsea once was an artist and bohemian quarter in the 19th century where painters like J.M.W. Turner, Whistler and Sargent, and writers like Carlyle and Meredith lived. In the 60s and early 1970s its main shopping street, Kings Road, was a center of hip boutiques and home to the Beatles and the Rolling Stones. But that moment quickly disappeared, and the neighborhood morphed into what it is today — an affluent area filled with familiar luxury jewelry shops like Cartier and Tiffany, and boutiques like Prada and Gianni Versace. There are also exquisite streets of multi-colored town houses, and of Edwardian mansion blocks — 53 percent of whose inhabitants, shockingly, are moneyed American citizens. So the aesthetic pleasure that one gets walking the streets of Chelsea and other islands of wealth is somewhat mitigated by the economic inequality and injustice the area embodies.

There is much more to the trip: coffee with a friend in London’s restaurant-suffused, cleaned-up SoHo where once the sex industry reigned; a walk along the South Bank, overlooking the Thames, crammed with people going to pubs and visiting the Tate Modern and the Globe; and an afternoon at the Royal Academy where an Art Party — including an imaginative music performance on its stairwell — was being held to celebrate its new campus, which will provide 70 percent more space for its very strong permanent collection that includes many Constables and Reynolds.

All in all, despite our feeling exhausted at times, and my lacking the capacity to walk long distances as I did in the past — the trip worked out extremely well. My wife, who hadn’t been in London for years, was stirred again by places where we had spent time in the distant past. The city had changed greatly over that time — for this year alone sees 10 new towers being chaotically added to its skyline — but London could still elicit a deep emotional response from her, and from me as well. Mine heightened by the pleasure she took in all these places.