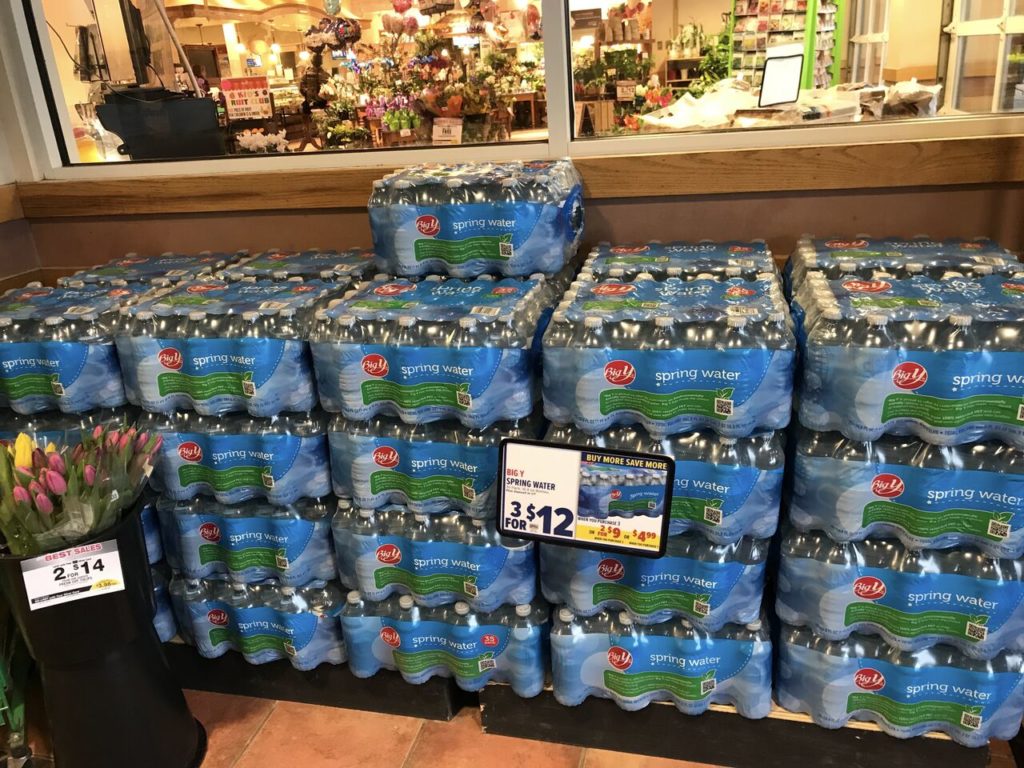 These plastic bottles of spring water stacked in the entrance of the Big Y in Great Barrington could not be sold legally if a proposed bylaw prohibiting their sale is passed by residents at the annual town meeting Monday, May 7. Photo: Terry Cowgill

Great Barrington — It will be a busy night come Monday, May 7, when Great Barrington holds its annual town meeting at 6 p.m. in the Monument Mountain Regional High School auditorium. After all, there are 27 articles on the warrant, including the perennially contentious school budget.

But this year the item that seems to be generating the most chatter is a controversial proposal from a group of women who want to prohibit the sale of drinking water in single-use plastic bottles.

The environment committee of the Berkshire Women’s Action Group and Indivisible Berkshires this winter managed the necessary signatures to put a proposal before voters at the annual town meeting. It would effectively ban the sale of drinking water in small, single-use plastic containers. The bylaw would take effect Tuesday, Jan. 1, 2019.

The ban would extend only to single-serve water bottles of 1 liter (34 ounces) or less. Click here to read the proposed bylaw. To view The Edge’s story on the proposal back in February, click here.

Spirits are riding high among the group that has sponsored the proposal. They have dubbed the proposal “GB On Tap” after a similarly named initiative, Concord On Tap, that was approved by voters in that eastern Massachusetts town in 2012.

As of Monday, 40 businesses and organizations had signed off on the Great Barrington proposal. There are some high-profile businesses on the list, including Guido’s, Prairie Whale and Soco. Most recently the Berkshire Co-op Market came on board.

If it passes at town meeting, the GB On Tap program intends to provide additional drinking fountains and bottle refilling stations throughout town. In addition, participating merchants will offer refillable water bottles for sale and will be encouraged to install filtered water dispensers in their stores. The bottles will feature the movement’s logo with the words “refill, refresh, renew” across the front.

Jennifer Clark, a Great Barrington businesswoman who spearheaded the movement, said the proposed bylaw included paper and glass. The Co-op objected to such broad wording so Clark plans to introduce an amendment on the floor of the town meeting to exempt paper and glass and also to exempt sales of the single-use plastic water bottles to police, firefighters and emergency medical responders — all of whom take deliveries of the bottles and use them when responding to the scenes of emergencies.

But if the reaction on social media and in letters to the editor of the Edge are any indication, there is significant opposition to the proposal as well.

Even if the proposal fails, “It may impact people’s lives in some way and it gets their attention,” said committee member Marcia Arland of Egremont.

“We want to give it the full-court try,” added panel member Marj Wexler, also of Egremont. “We will just keep working on it.”

“In either case, the marketing opportunity for the town is great,” Clark explained. “The town will become a leader in the forefront of this issue. For us to have that initiating impact is a good thing.”

Clark has pointed to an array of research and dataindicating the environmental problems associated with plastic in general and the single-use water bottles in particular.

Last week the Edge received a letter to the editor from Andy Moro, who heads the Great Barrington Republican Town Committee. Moro suggested that consumers will simply purchase water from other towns. He added that enforcement, which would be left up to town manager Jennifer Tabakin (or her designee), would be overly burdensome on businesses and town government, especially considering that “During budget hearings we been told that departments doing inspections are overworked and additional manpower is needed.”

“Our town is changing and not always for the good,” Moro said. “If we are not vigilant, we will destroy our community from within.”

Moro’s letter generated 18 comments, including one from Selectman Ed Abrahams, who typically supports progressive causes, including a ban in Great Barrington five years ago of the use of thin-film shopping bags with handles.

But Abrahams was wary of the burden the bottle ban might put on small businesses, whom he said “would be hurt” and “don’t have a lot volume to absorb this loss.”

“Single-use plastic bags had a simple alternative that actually saved local businesses money,” said Abrahams, who nonetheless applauded the initiative of BWAG in raising public awareness. “This ban is different.”

In an interview, Betsy Andrus, who heads the Southern Berkshire Chamber of Commerce, said she hasn’t heard a lot of pushback from merchants yet but she expressed some of the same concerns as Abrahams.

Andrus added that she, too, is concerned about the effect plastics have on the environment and “it’s clearly something we have to look at.”

“We all know there is a huge problem out there,” Andrus said. “But we need to do what we can to keep small businesses alive.”

Andrus was also unsure of how much the filtered water dispensers would cost to purchase and install in stores. Clark told the Edge the machines, with hardware and installation, would probably run in the neighborhood of $1,500 — a drop in the bucket to Big Y or Price Chopper, but not exactly pocket change to smaller stores.

Representatives from the Berkshire Co-op, Price Chopper and Big Y did not return messages seeking comment by the time this article was filed for publication. All three publicly embraced the 2013 ban on plastic shopping bags. But the owners of a small Main Street store are standing squarely against the plastic bottle proposal.

John Tracy is the grandson of Charlie Norton, who established Gorham & Norton in 1922. It’s been a classic fixture on Main Street ever since. The small store has a deli and sells groceries, gourmet foods, wine and liquor. Tracy owns and runs the store with his wife Diane.

They also sell a lot of bottled water, especially during the summer months when the street is crawling with Appalachian Trail hikers, shoppers, tourists and other visitors.

“Obviously, it’s a good source of revenue for us,” John said this week from behind the register. “We sell a lot of water in the summer — about 30 cases of Poland Spring a week. It carries us through the wintertime. I would definitely miss the income.”

Diane said customers have come into her store and told her and John they will simply go elsewhere to buy their water. The Big Y in Lee and the Stop & Shop in Canaan, Connecticut, have been mentioned frequently by customers who say they will not give up the bottled water.

“People are going to say, ‘You’re only concerned about your bottom line.’ I’m in business to make money,” John explained. “Of course, I’m concerned that I’m going to lose the chance of selling bottled water. There’s nothing in here that would replace it.”

Another downtown merchant, Robin Helfand of Robin’s Candy, told The Edge that she, too, supports the goal of reducing the use and consumption of plastics and​​ in her own store is​ undertaking a comprehensive review of “green retailing best practices.” Her shop is ​phasing out plastic straws and spoons in favor of ​eco-friendly​ alternatives. Still, she does not see BWAG’s plan as entirely the right approach.

​​Instead of a ban, Helfand would like to see​ ​”​public drinking stations​ installed and tested together with​a comprehensive plan ​to educate, ​monitor​ safety and ensure cleanliness. The plan would require multi-agency coordination between our Health Department​, Department of Public Works​ and Selectboard.”

Helfand i​s​ convinced that an education plan​ encouraging voluntary compliance​would be the most effective approach. Increasing public awareness about the adverse effects of plastics, as​ publicity around​ BWAG’s proposal itself is doing, will ​ultimately​ result in reduced usage in the town​ and incentivize retailers to seek alternatives.

“To summarize, we support initiatives to educate rather than legislate,” Helfand said.

One local company that specializes in commercial and consumer spring water has also come out against the proposal. Asked for comment, Janis Bosworth​ Graham-Jones, one of the owners of Berkshire Mountain Spring Water, sent The Edge a letter to the editor. Click here to read it.

Graham-Jones said the PET bottles containing single-serve spring water her Southfield family business sells “are recyclable and have many uses as a recycled material.”

“We have many home, office and retail customers in Great Barrington. Our customers choose our spring water over tap water for both taste and health preferences,” Graham-Jones wrote.

“Please rethink this proposed bottled water ban and focus your efforts on recycling all plastic containers, which can be used in many new ways. The single, most effective thing a consumer can do to reduce plastic pollution of our environment is to ensure that any used plastic container enters the recycling chain directly from their hand.​”

Clark responded to the pushback last week with a letter to The Edge. “We ask that people attend town meeting, keeping their minds open to hearing another approach to providing drinking water,” Clark wrote.

Clark repeated some of the research she spoke of in her Edge interview. She cited the danger the bottles pose to wildlife, low rates of plastic-bottle recycling nationwide and the success of the ban in Concord, where Clark met earlier this year with activists to gather input for her proposal. After the Concord ban went into effect, plastic waste was reduced significantly, Clark said, and “their board of health was the designated enforcement agency, and their public health director has not had to make any adjustments in staffing.”

That wasn’t enough to convince Gorham & Norton’s Tracy, who said of BWAG, “I just think their efforts would be better spent teaching recycling to make people aware of what they should do when they finish with a water bottle.”

It’s anyone’s guess whether the BWAG proposal will pass, but one thing seems certain about Monday, May 7. As Edge reader Steve Farina said, “It seems we are going to have a long town meeting.”