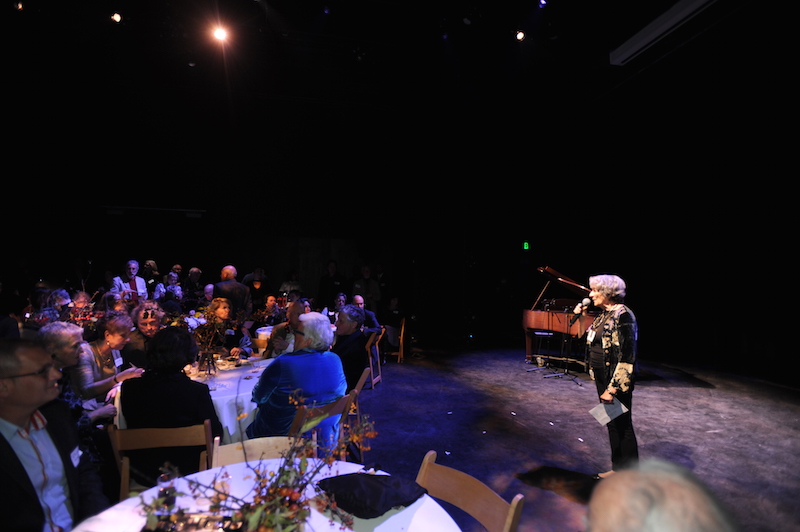 Chatham, N.Y. — “Cut the ribbon — What are you waiting for?” one woman shouted from the audience as, onstage, Judy Grunberg, the founder and president of PS21, paused to look out at the crowd before cutting the ceremonial red ribbon, unveiling a new permanent performance space and era for the organization she founded 13 years ago.

PS21 stands for Performance Spaces for the 21st Century. True to its name, the organization, with help of a seven-person board of directors, has brought 12 seasons of music, from Cuban jazz to Bach, as well as classical and modern dance and standup comedy to a saddle-span tent atop a small hill off Route 66 in Chatham, New York. The organization operates according to Grunberg’s vision and, despite having a temporary performance structure for 12 years, PS21 has attracted prominent dance companies including Parsons and TAKE, as well as world-class musicians like Eugene Drucker and Rory Block to its stage. Over the past decade, PS21 has built up a reputation in Columbia County and the larger upstate area as an ideal place for weekenders and locals alike to escape to on a Saturday night to absorb a bit of culture, whether that be a recital of the art of North Indian music or a comedy sketch about the dullness of being the triangle player in an orchestra.

Despite the quality of the performances and the prominence of the performers, the “big white tent,” as it was referred to by locals at PS21, always gave the space a fleeting and transient feel. The new $8 million structure consists of an open-air pavilion which seats 300 opposite a black box theater under the same roof. The building, mainly constructed with concrete pillars and wood, is built into the hillside to reduce sound pollution and puts PS21 on the map in a new way, turning what was once a seasonal arts space into year-round cultural institution.

The new building for PS21 has been a dream of its founder Grunberg ever since the organization’s inception. Now in her 80s, Grunberg has built a reputation for herself in Columbia County as a highly energetic and successful businesswoman as well as a fierce supporter of culture and the arts. She is the owner of the Blue Plate restaurant in Chatham, a member of the team which established the town’s co-op and a key player in saving the Crandell Theatre on Main Street.

Growing up in Manhattan during the 1940s, Grunberg fell in love with theater and dance. Back then, on a Friday or Saturday night, she could be seen under the flickering lights on Broadway waiting with her friends outside the theaters in the hopes of scoring one dollar standing-only tickets. She went on to graduate from Bennington College where she studied painting. In the 1960s Grunberg moved upstate to Columbia County with her four boys and her husband, the late Paul Grunberg, who founded Jackson Hewitt Inc., the second largest tax preparation service in the nation.

The opening night and unveiling of the new performance space was sold out. The ribbon-cutting was followed by musical performances from the Vanaver Caravan, physical comedy from Hilary Chaplain, three original compositions from world-renowned accordionist Guy Klucevsek, and TAKE and Parsons Dance numbers to conclude the show. After the performers left the stage, the audience filed out into the lawn and formed a line at the café window to the right side of the pavilion. The night was clear and the stars shone brightly as staff for PS21 broke out icy bottles of champagne. For Grunberg, the opening night seemed like a huge success, but the new building signals not only the realization of her dream, but the beginning of an era for PS21, and with it a new uncertainty and an awareness that more is at stake.