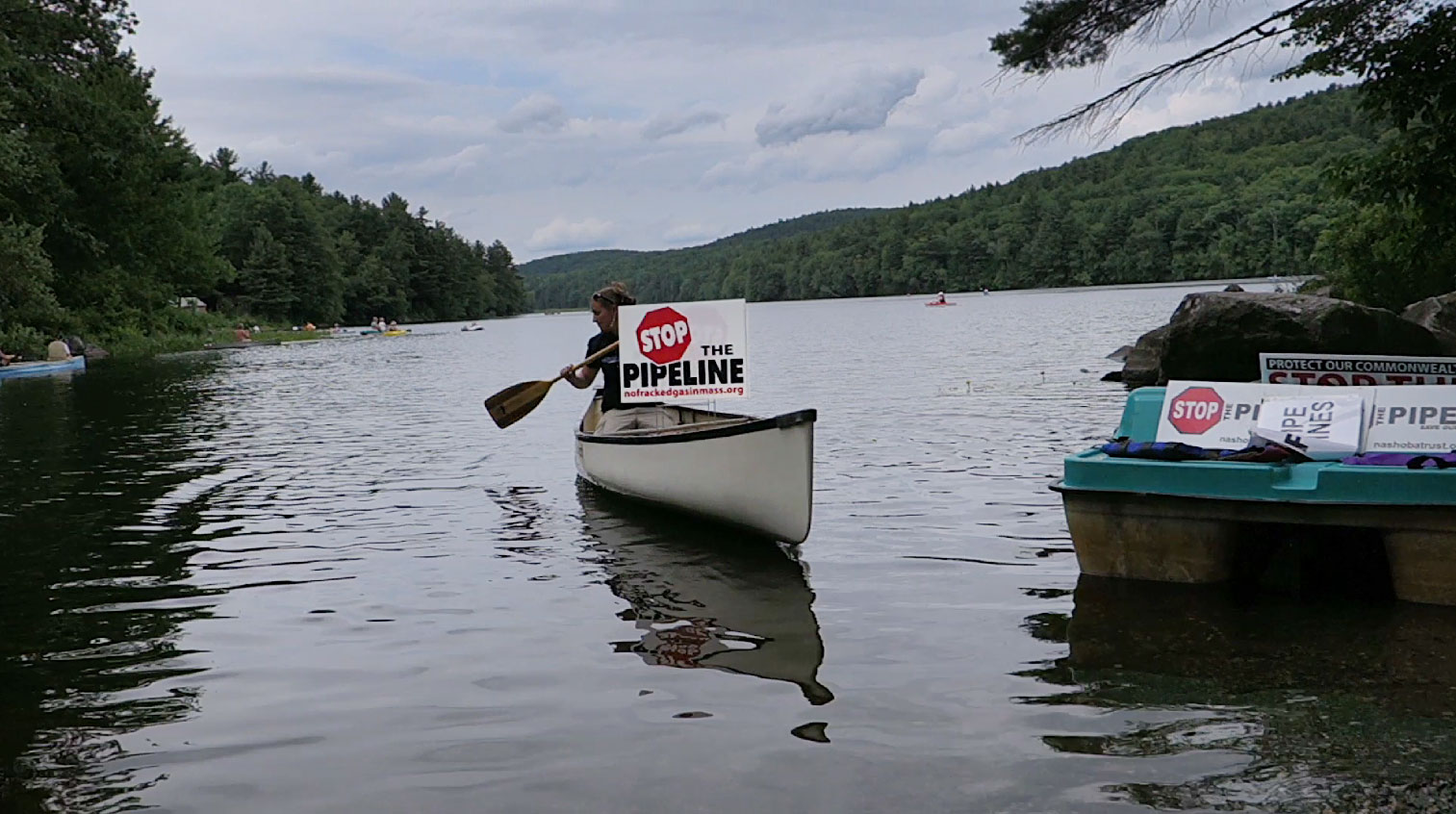 Great Barrington — Around 100 protesters came to the Gazebo behind Town Hall to rally against the fracked natural gas pipeline Kinder Morgan plans to install in state-owned and protected Otis State Forest. The company’s subsidiary, Tennessee Gas Pipeline Co. is to enlarge a swathe through the old-growth forest to bury a natural gas pipeline storage loop, part of its Connecticut Expansion Project.

“Resisting the Pipeline” was sponsored by the Sugar Shack Alliance and a handful of other environmental groups in the region.

A judge in May granted Kinder Morgan subsidiary Tennessee Gas Pipeline Company eminent domain rights — citing the pre-eminence of federal law — to an easement that would add a third pipeline to an existing corridor that contains two others. But the installation would require widening that run by around 60 to 100 feet in an area close to a stretch of old-growth forest. The judge delayed the cutting until July 29 so the Legislature had time to weigh in on whether the easement can be had on land owned by the state and protected under Article 97 of the state constitution.

Attorney General Maura Healey’s office, after battling Tennessee Gas in court over the speed at which it wanted to begin clearing the land, is mum on any plans that might include an appeal. But the state next week will be back in court to begin the process of negotiating a price for the land. Healey’s office also declined to answer questions about whether the land has been appraised and how much the state planned to ask for it.

Washington, D.C.-based environmental attorney and Edge contributor Mary Douglas was in town with family, and went to the rally. Douglas said that with 12 days until the stay on clearing is lifted, she “doubts anything can be done except an emergency injunction.” She said compensation was the main issue at this point, and said it would “take into account the value of the lost use of the land” and possibly the “aesthetic value.”

Jane Winn, executive director of Berkshire Environmental Action Team (BEAT), said Tennessee Gas still has more hoops to jump through before it can get out the chainsaws.

She said while the company already has its permits, each bears a set of conditions that will determine just how much damage it can do to the land and to Lower Spectacle Pond, from which it will draw millions of gallons of water to flush out the new pipes.

“Every single “t” needs to be crossed, every “i” has to be dotted,” Winn said. “Let them know you are watching them every step of the way.”

She said Tennesee Gas is still on the Sandisfield Conservation Commission’s agenda until the clearing begins, and she encouraged people to attend.

Hampshire College senior Dineen O’Rourke is involved with Climate Action Now and is no stranger to anti-pipeline work. She said “people-powered grassroots movements” are effective, despite a twisted regulatory set-up that has “FERC (Federal Energy Regulatory Commission) funded by the industry it is supposed to regulate.”

Before everyone packed up and headed out to another rally at Lower Spectacle Pond in Sandisfield, there was puppeteering by the PachaMama Puppets children’s theatre troupe and Count Dorsey. A greedy dragon made an appearance.

Conservationist Cathy Kristofferson works with Pipe Line Awareness Network for the North East, Inc. (PLAN-NE). She told the Edge the organization is “hoping to appeal” parts of the water quality permit issued to Tennessee Gas later this month. And she said, while she appreciated that Healey’s office has to keep its strategy “close to the vest,” environmentalists are frustrated that they don’t yet know the state’s hand.