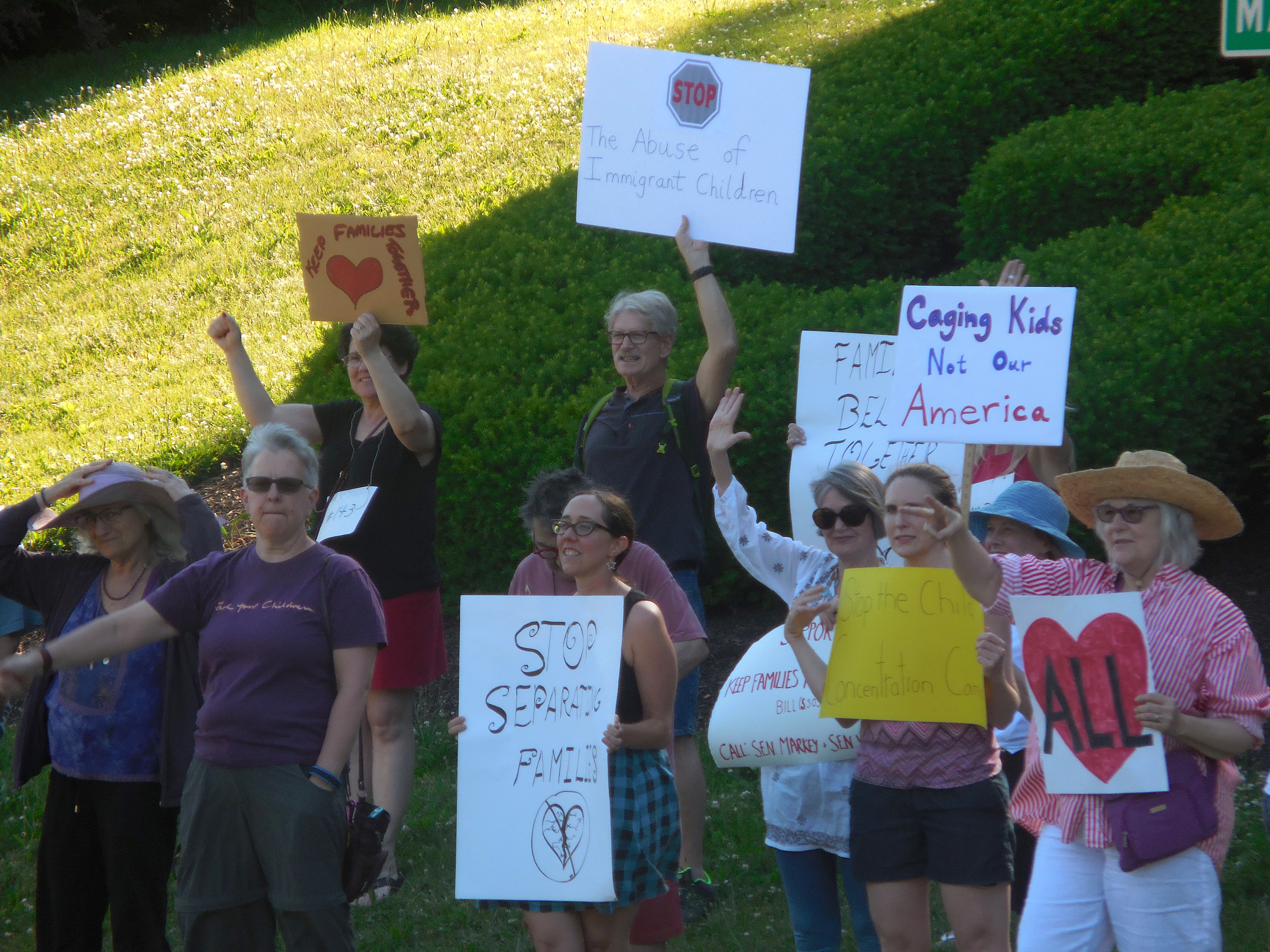 Great Barrington — During the 5–6 p.m. rush hour Tuesday (June 19), about  30 protestors gathered in front of the GB emblem on Main Street at the Brown Bridge to demonstrate against President Trump’s “zero tolerance” policy on immigration that resulted in the separation of thousands of immigrant children from their parents — one of hundreds of such demonstrations nationwide against the Trump immigration stance.

Holding up makeshift signs decrying Trump and demanding legal protection for immigrant families, the crowd stood on the sidewalk in the blistering afternoon heat, asking cars passing by the busy intersection to honk in support of immigration reform and a reversal of the new policy, which, belatedly in reaction to public outrage, Trump has since modified by executive order.

This demonstration comes in the wake of hundreds of other protests that took place in all corners of the country, from Hudson, New York, to El Paso, Texas. On the U.S. side of the Mexico border,  hundreds of immigrant children are being stored in tent camps, abandoned stores and large cages as a result of Trump’s policy. Others have been shipped to remote holding facilities, one of which is near Hudson, New York. Meanwhile, these children’s parents have been detained indefinitely while they await prosecution for the crime of illegally crossing the border, a misdemeanor which carries a fine and no more than six months in prison.

The separation of the families originally began when, on April 6, the Department of Justice announced the original “zero tolerance” policy requiring officials to prosecute as many immigrants illegally entering the country on the southern border as possible. The policy marks a departure from the Obama administration’s immigration strategy, which resulted in mass deportations but, in contrast to what Homeland Security Secretary Kirstjen Nielsen falsely claimed yesterday, did not separate children from their parents in large numbers.

Attorney General Jeff Sessions has justified the “zero tolerance” policy by citing scripture while Nielsen had claimed the policy will deter more families from crossing the boarder illegally, a claim that has not been demonstrated in recent immigration data.

According to a Pew study cited in the Washington Post, “the number of immigrants from El Salvador, Honduras and Guatemala jumped by 25 percent between 2015 and 2017.” The study also reaffirmed what many opponents to the new policy have said during TV interviews: that the majority of those immigrating illegally to the U.S. are fleeing war zones, gang violence and human trafficking as well as starvation and abject poverty — for many families, the journey to the U.S. was treacherous, but deportation back home will serve as a death sentence.

On June 6, the ACLU and the international law firm of Arnold and Porter, based in Washington, D.C., filed a federal lawsuit “on behalf of immigrants’ rights groups challenging the Trump administration’s plan to include a citizenship question on the 2020 census.” All living former U.S. first ladies, most notably Laura Bush, have spoken out against the policy as “cruel” and “immoral,” and an aggregate of polls conducted in the last month shows that 64 percent of registered voters oppose separating children from their families at the border.

One of the demonstrators on Tuesday, David Rosenberg, yelled at cars passing by to “honk, please give us a honk.” He pulled this reporter aside to voice his frustration with Trump, saying: “Children need their families. Locking them up in cages at the border will do serious … harm to them. The whole situation reminds me of the Japanese internment camps during World War II. Trump needs to reverse this policy right now.” It was hard to hear everything Rosenberg was saying, but his anger was palpable over the sound of car horns blaring.

Today, it looks as if Rosenberg and his fellow demonstrators may have gotten their wish. This afternoon, the New York Times reported that Trump signed an executive order that “ends the separation of families by indefinitely detaining parents and children together at the border.”

The order does not end the criminal prosecution of parents who came to the U.S. illegally but does says that the administration will work on building facilities that can house families as they await deportation. Nor does it provide a mechanism for immigrant children who have been imprisoned in various states to be reunited with their parents. Instead, parents and children may now be imprisoned together — unless that directive is overturned by the courts. For the moment, however, Trump has caved — to some extent — to public pressure, perhaps a show that demonstrations and public outcry can effect policy change. But the journey for families detained at the Mexican border is still a long and dangerous one and, for many, it will still end in deportation and a very uncertain future.