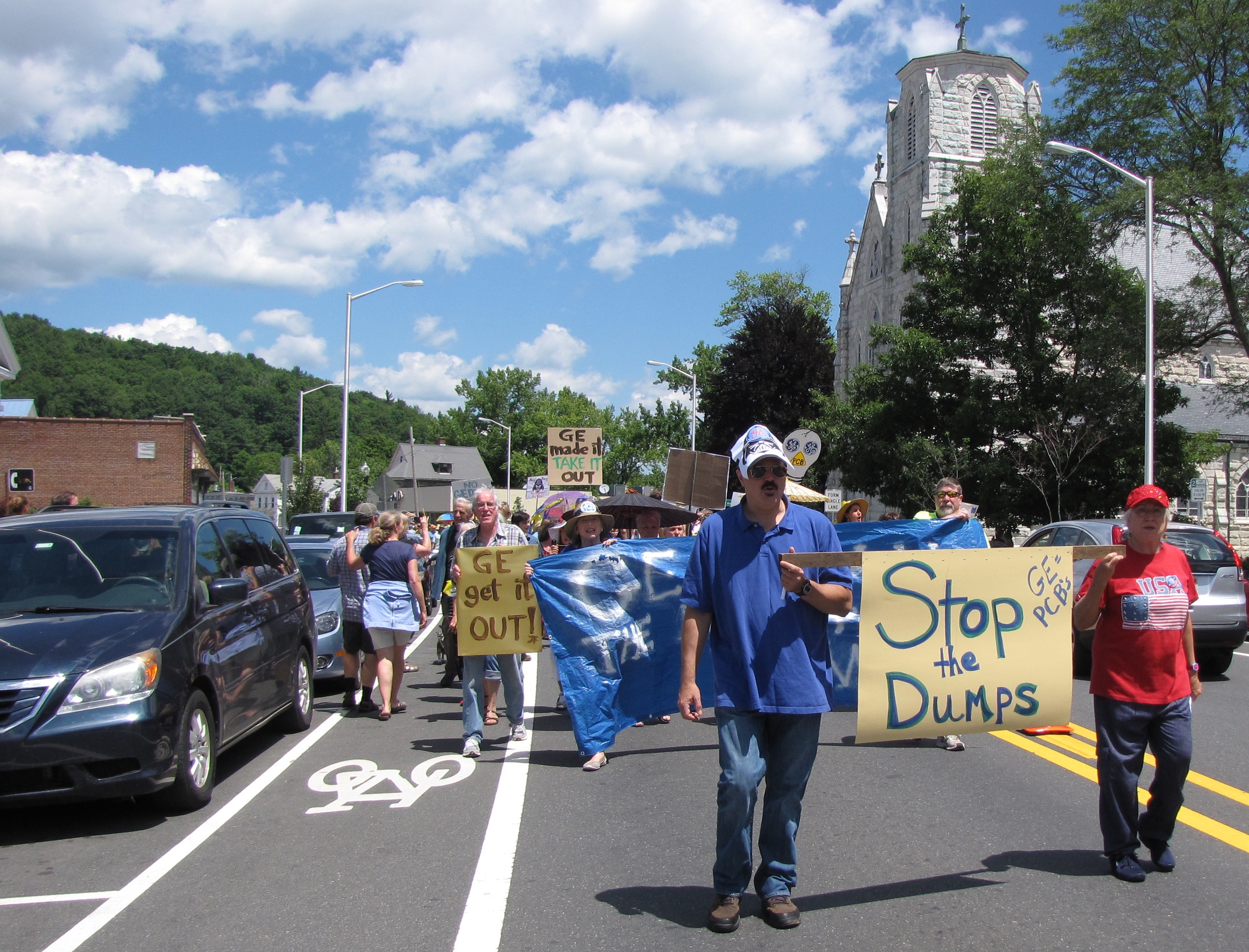 Great Barrington – For the second time in as many months, Berkshire residents in significant numbers took to the streets to protest the PCB waste dumps in Housatonic and two other Berkshire County locations proposed by the General Electric Company as permanent storage areas for the toxic sediment the company is being required to remove from the Housatonic River.

In May, Housatonic and Great Barrington residents marched en masse to the site along the banks of Rising Pond (see report here and Edgecast video) where General Electric had purchased the property it intends to use as a PCB landfill, should it be permitted to do so by the Environmental Protection Agency as part of the Rest of the River cleanup of millions of pounds of polychlorinated biphenyls General Electric dumped into the river from its former transformer manufacturing complex in Pittsfield. In its negotiations with GE, the EPA has so far opposed the creation of PCB landfills, preferring instead to have the contaminated sludge moved by rail to a licensed treatment facility.

On Sunday (July 3), during the midst of the Independence Day holiday, protesters were back on the street, this time in the center of Great Barrington, taking part in what was billed as the “Mega March against PCB dumps.” An estimated 200 citizens, bedecked with yellow caution tape and carrying signs identifying General Electric as bringing poisons to life, marched on Main Street from the Salisbury Bank to Town Hall, much to the bemusement of tourists lining who were visiting this weekend for the traditional opening of the Berkshire cultural season.

The march of about 200 people from Salisbury Bank to Town Hall on Main Street was organized by Pooja Prema of Housatonic and Amy Warner. “I think more people are knowing about it and I think still more people need to know,” Prema said, “We have a tendency to think ‘Oh I don’t live in those towns so it doesn’t pertain to me’ but it pertains to all of us. We all drink this water, we all inhale the PCBs that are released for miles around for many lifetimes.

“I feel that GE is just one in thousands of corporations that are doing the exact same thing to land and to rivers all across the world. We here have our small part to play in that big fight which is to stand up for our land and our water and the respect for humanity. So we’re doing what we can here and I think the more public momentum and outcry there is, and I mean the entire Southern Berkshire district, not just a few hundred people at a rally, but like everybody, and the town governments, have to get on board with saying this is not going to happen again, because it happened in Pittsfield.

“Ultimately we’re looking to get ecological remediation of the PCBs because just dumping it here or dumping it somewhere else in Texas is not the ultimate cure. It’s not a cure at all”

Architect Diego Gutierrez of Housatonic who assisted in coordinating the march with town officials and the Great Barrington Police Department, who were on hand to redirect traffic during the march, explained that “it’s really an EPA requirement that GE needs to clean this up so the question is how.”

“We want to look at other options,” Gutierrez said. One option, he said, is bioremediation which uses natural bacteria to break down the PCBs. “It’s a little experimental but better than dredging and dumping in an area like this,” he noted.

“There’s a lot of good energy here, a lot of new energy,” he observed, standing with the crowd in front of Town Hall, “but more importantly, there’s a different nuance here. People are saying that the toxic stuff – the PCBs – that is unwelcome in our community is unwelcome in another. We need to put pressure on the EPA to regard PCB dumps as a temporary solution, a holding facility waiting for technology to catch up. They should not be a permanent solution.”

The march was a festive affair, as well, and included a 14-piece band, the What Cheer Brigade from Providence, Rhode Island. As people marched, they danced to the music in brightly colored homemade costumes with artistically decorated signs while chanting “Hey Hey GE, no dumps no way.” The march culminated at the town hall where several people spoke about the cause.

As the marchers danced and walked up the driveway to the front of Great Barrington’s Town Hall, they passed the stone marker commemorating the place where the first open resistance to British colonial rule occurred on August 16, 1774.

Reed Anderson, an artist and father of two young children, designed the PCB logo that was featured throughout the parade on stickers, signs, and even painted onto Amy Warner’s pregnant belly. The blue circular logo used a traditional GE design, but replaced the GE in the center with PCB.

Anderson said that he had bought his house, on the border of Great Barrington and Housatonic, in January and was not told by the realtor that GE had purchased the land directly across the river. Had he known, he added, he would never have purchased the house.

“I am now in a situation that is desperate and will fight tooth and nail for this,” he said, “but we’re not going to move because this is a community that we love and that’s why we are committed to stay here and fight GE.”

Among the crowd were three Great Barrington selectboard members, Bill Cooke, Ed Abrahams, and board chair Sean Stanton. They said they took part in the march as concerned residents in support of their community’s safety. Two candidates for State Senate, Adam Hinds and Andrea Harrington, also attended and spoke briefly at Town Hall on the importance of clean land and a strong grassroots movement.

“If GE doesn’t want to be their better self then we have to take this fight and keep fighting,” Harrington told the crowd.

Before the march rolls of yellow caution tape were passed around and draped on bodies. Maia Conty, the Great Barrington resident who brought the tape and spoke at Town Hall. Conty added: “We live in an extraordinarily vibrant and creative community so this is just an appetizer, a taste, of what GE will be contending with.” She put emphasis on the desire to work together as partners with GE for a solution.

From the steps of Town Hall, Pooja Prema declared: “Take a moment to look around because this is what community looks like when we stand together and we’re going to have to do it a lot more.”