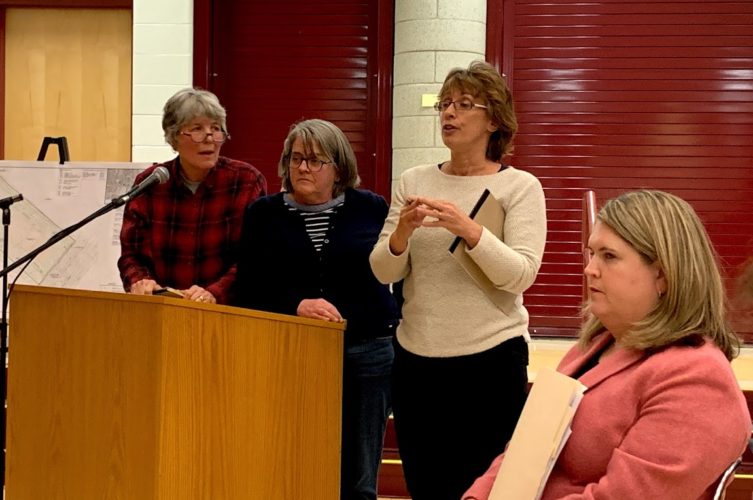 Great Barrington — Parking in downtown Great Barrington is such a sore subject for so many people that anytime there is talk of limiting the number of spots available for the public, the defenses go up.

That’s what the new owners of the Berkshire Block, the building at the corner of Bridge and Main streets containing the Subway sandwich shop, discovered last week when their engineer approached the selectboard and proposed to build a parking lot off School Street for their tenants.

The new owner of the Berkshire Block, Philips International Holding Corp., would like to buy the lot on School Street currently occupied by the Individual Laundry laundromat, demolish the structure and build a gated parking lot of some 38 new spots for upstairs office tenants and customers of the street-level retail establishments in the Berkshire Block.

The laundromat is across School Street from the Jane Iredale Mineral Cosmetics headquarters in the former Bryant School building. It has been the only downtown laundromat since Ried Cleaners on Main Street closed in 2006.

Philips, which bought the property at 311-322 Main St. in 2016 from Avcorm Realty Trust for $2.45 million, has spent $2.5 million renovating the building into approximately 30 upstairs offices and half a dozen or so retail spaces, including not only Subway but the popular Patisserie Lenox coffee and pastry shop.

The addition of so many offices, many of which were formerly apartments, has created a parking problem for the new owners of the building. So the company recently bought the lot containing 37 spots adjacent to the former Foster’s hardware store. If the laundromat proposal is approved, the total number of new spaces for Berkshire Block tenants and retail customers would be 75.

Click here to see the plans presented by Matthew D. Puntin, a project engineer from SK Design Group representing Philips, which is seeking a special permit from the selectboard to demolish the laundromat and construct the parking lot.

Click here to see video of the meeting courtesy of Community Television for the Southern Berkshires. Fast forward to 0:12:10 to see the public hearing and the discussion of the Philips proposal.

“We think it’s important to add adequate parking for their tenants and customers,” Puntin said of his clients. “It’s our understanding that parking is difficult in downtown Great Barrington.”

But there were two major concerns voiced by town officials Wednesday night at the public hearing at Monument Valley Regional Middle School. At its Dec. 12 meeting, the planning board gave the proposal a negative declaration. Click here to see the letter describing the board’s reasoning.

Planning board member Jonathan Hankin told The Edge that the laundromat property was mixed-use and that the neighborhood “was rezoned to encourage redevelopment for housing and possibly other things.”

“We’d rather have people downtown than cars,” Hankin said. “It’s a terrible use of that property. Parking lots surround that whole area.”

“We won’t have a downtown laundromat,” Davis said. “I feel that demolishing a mixed-use development for parking might set a bad precedent … I recognize that there is a parking problem but I do not feel that this is the way to solve it.”

The owners of the laundromat, the Torrico family, are looking to sell the property they have owned since 1989. They said the former tenants in the two apartments “were given plenty of notice” and were given help finding new places to live.

Another board concern was that the lot behind Foster’s that Philips had acquired has always been private, but members of the public had for years been allowed to park there on nights and weekends. So the proposal, if approved, would result in fewer parking spots in the off hours.

Selectboard Chairman Steve Bannon asked Puntin whether his clients would commit to keeping the lot off Bridge Street open to the public nights and weekends. But Puntin did not seem to have a clear answer.

“The existing [lot] is owned by our client,” Puntin said. “It is private and intended to remain private. But there will be no fences, no gates on that lot.”

Abrahams added that he is concerned that the same thing that happened at the gated parking lot at the end of Railroad Street will happen to the proposed gated parcel at the School Street property. The former was purchased by the owners of the new 47 Railroad mixed-use project. It is gated and reserved for 47 Railroad tenants.

“They took some private property and made it a private parking lot just for that building,” Abrahams said. “It’s empty most of the time.”

Attorney Kate McCormick, representing Raifstanger LLC, the owners of Kwik Print, also raised objections to the proposal. She noted that Kwik Print’s deliveries are handled at the rear of the building.

The only access to the rear is from a dirt driveway running from School Street along the southern extremity of the laundromat property. If that property were gated and closed off to secure the new parking lot, Kwik Print would be hard pressed to handle deliveries.

“Their needs and concerns have not been addressed by this proposal,” McCormick said of her clients, the Raifstangers.

With so many unanswered questions, Bannon asked Puntin if he would like to continue the public hearing to a later date.

“I would respectfully ask that you continue,” Puntin replied.

“I thought that was a very wise move,” Bannon said with a smile.

The proposal will be taken up again when the public hearing continues Monday, Feb. 10, at 7 p.m. at Town Hall.