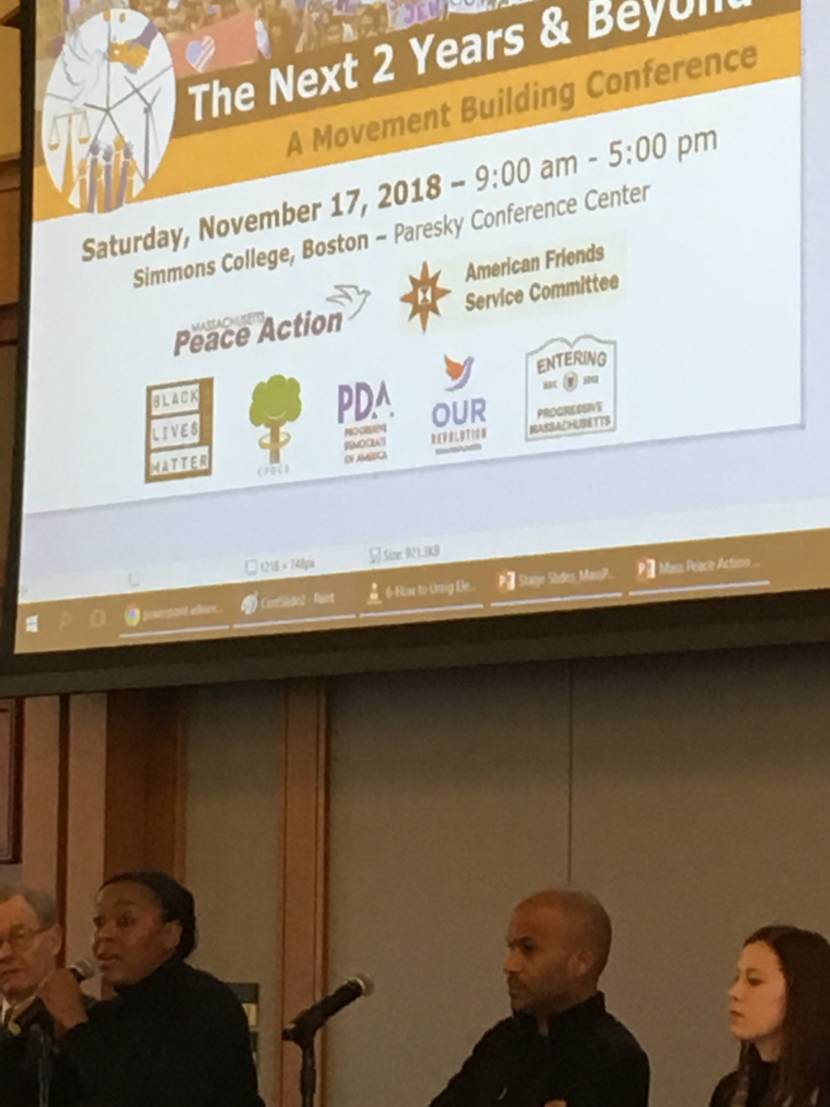 Boston — “We have been drawn together by a sense that there is danger in the air,” Rev. Karlene Griffiths Sekou remarked in the opening of her afternoon keynote address Saturday, November 17. She addressed an audience of more than 100 gathered at Simmons University for a progressive organizing event titled “The Next Two Years and Beyond: A Movement Building Conference.” The conference, sponsored by Massachusetts Peace Action and other progressive organizations, covered a range of critical issues currently facing the country and the world, and explored the intersections of contemporary social movements.

Speakers and participants spent the day discussing and strategizing, connecting and communicating. The overall conversation featured three main threads: reflecting on the recent midterm elections; recognizing how historical struggles and forces have led to the crises we face today; and understanding the interconnectedness of various issues and the need for an intersectional movement that unites progressive fights for economic, environmental and social justice.

John Nichols, national affairs correspondent with the Nation, delivered the opening keynote, speaking to the current political landscape and highlighting notable progressive victories from the November 6 election. While significant obstacles remain—Nichols pointed to voter suppression, mainstream media that covers elections like a sporting event, and a Democratic Party that operates in a centrist, managerial mode—the midterms demonstrated the potential for transformative change. Nichols discussed several examples: Democrats retaking the House to restore a constitutional check on Trump’s abuse of power; the three states that narrowly went for Trump in 2016, Pennsylvania, Wisconsin and Michigan, seeing Democrats win key races for senators and governors; and the election of young, diverse and progressive people to Congress like Alexandria Ocasio-Cortez, Rashida Tlaib, Ilhan Omar and Ayanna Pressley.

“I am so excited for the transformation that is coming. This is just the beginning,” Nichols said.

At the state level in Massachusetts, one of these progressive, anti-status quo candidates was just elected to represent the Boston area 15th district in Suffolk and Norfolk counties. Representative-elect Nika Elugardo addressed the conference from a historical perspective. She said the broader structural conception of the slavery era still exists, comparing modern-day workers to slaves and servants of the past, both subordinates who are beholden to a master. “The plantations of our history are the corporations of today,” she said.

Other speakers referenced the nation’s roots in colonialism and racism. Carl Williams, a movement lawyer currently teaching at Cornell Law School, said that the U.S. Constitution is filled with language that speaks to the concepts of domination, racism and slavery. “At its essence, the founding document of this country is white supremacist,” he said. “Racism, xenophobia and nationalism are a part of the constitution of this country,” added Griffiths Sekou, who organizes with Black Lives Matter Boston and is an international public speaker and public theologian. She noted that racial injustice and white supremacy still exist today, exemplified by realities like the school-to-prison pipeline and hyper-policing in predominately black neighborhoods.

Given the continuation of historical systems of oppression, and with modern forms of militarism and authoritarianism on the rise, emerging social justice movements like the women’s marches, March for Our Lives, Fight for $15, Black Lives Matter and the People’s Climate Movement represent a collective response to compounding crises. The challenge, as this conference identified, is bringing all of these movements together and maintaining unity among diverse groups working on what are seen as separate issues.

“All the words we hear about our movements are true. We need to break down the barriers and silos and be more intersectional,” said Phyllis Bennis, director of the New Internationalism Project at the Institute for Policy Studies. Several other speakers pointed to the importance of “showing up for others” and uniting across movements.

“In this fight that we’re up against, we need all hands on deck,” said Griffiths Sekou.

And with everything on the line, from human rights to the sustainability of life on Earth, the importance of the fight cannot be understated, as Williams alluded to.

“All we have to do is double down, know that we can win and fight like hell,” Sekou added.