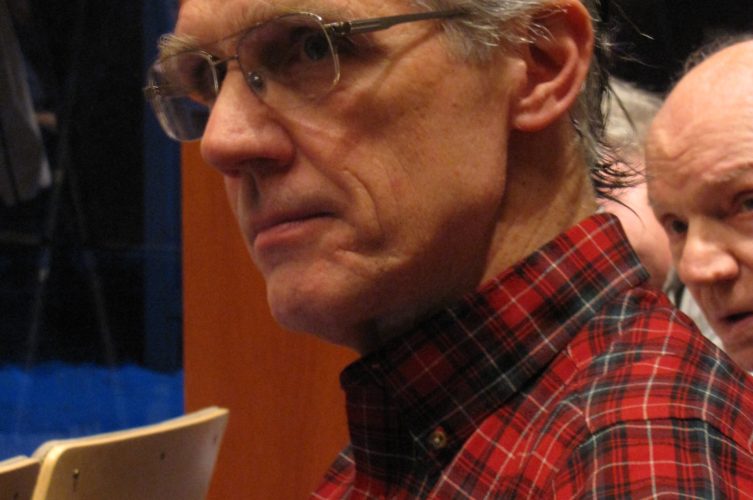 Editor’s Note: Michelle Loubert, the other candidate for a post on the Finance Committee, declined the invitation to participate in this series of candidate profiles.

Not surprisingly, Michael Wise sings in a choir. He works well with others, serving in numerous volunteer capacities in Great Barrington town government.

“I’ve put in about 17 years worth,” since he moved to town in 2010, says Wise, a retired public service lawyer who is running for the Finance Committee to go along with his service on the Zoning Board of Appeals.

It’s an active retirement: Wise is spinning plates like an octopus, and all because he likes it.

“I like getting together with other people of good will and intelligence and solving local problems to make life better for folks around here.” He thinks town government “runs pretty well,” and he thinks he can help make living in town more affordable.

Wise was a Federal Trade Commission lawyer in Washington, D.C. for 15 years before moving to Paris to work with the Organization for Economic Cooperation and Development (OECD), good preparation for sometimes sticky, but highly democratic New England-style problem-solving. At the OECD, Wise says, he advised “governments, about …well…government.”

He was elected to the Zoning Board of Appeals after he researched a property line issue at his residence. Board members were so impressed by his problem-solving skills that they encouraged him to run. He is up for re-election on Tuesday. He also served on the Town Charter Revision Committee, was chair of the Town Manager Screening Committee and co-chair of the Master Plan Committee.

One reason he made an unsuccessful bid for Board of Selectman last year was, he says, to implement the master plan. He is chair of the Democratic Town Committee, the Tree Committee, and serves on the Cultural Council, and the boards of Close Encounters With Music and Crescendo Chorus in Connecticut. He even had a show on WBCR community radio.

It doesn’t end there. Wise is a Rotary member and was just elected to the organization’s board, a membership that he hopes will help him make connections with business people and officials in other towns that will lead to greater sharing of resources in an effort to lower tax burdens.

While he is an expert at nit-picking through budgets, Wise believes the Finance Committee should, in addition to looking at “minor efficiencies,” also “have a role in considering the bigger picture problems of town finances, the tax structure, the long-term capital plans.” He would like to have a “soup-to-nuts review” of town finances every few years, to see “why they’re doing what they’re doing.”

Wise wants to help the town run as cost-efficiently as possible. “Were not big enough to do everything independently,” he says of his hopes for South County small towns to work together and share resources.

One arena where the towns must cooperate is the Berkshire Hills Regional School District, but Great Barrington voters have rejected a high school renovation project the other two towns supported.

“It’s in our interest to have the best school system around,” says Wise, “and we shouldn’t be surprised that we have to pay something for it. But we’re paying too much, I think, given the share that we represent.”

“We are paying most of the cost of a district for more than half of students who come from someplace else,” says Wise, “and that offends people.”

Wise says the district needs to “find some way to get some leverage,” in order to receive full reimbursement. A problem, he says, is that state government looks at the town with its large tax base and its “free cash,” and thinks it is “rich.”

The town, Wise says, can lower its tax burden in several ways: A few thriving nonprofits with valuable real estate holdings in town might be persuaded to make payments in lieu of taxes if an appeal were made “to their sense of civic obligation.”

The town could use more profit-making operations for tax base expansion, says Wise, of raising revenue. He would be delighted to see “a few more Jane Iredales,” set up headquarters and operations here.

Wise has suggested the possible remedy of a residence exemption under state tax law that, if adopted here as it has been in other towns, would give full-time residents a break on property taxes. But how do we determine primary residence in the summering paradise that is Great Barrington?

“That will be a huge distraction,” says Wise, from the point of the exemption, which is to “give substantial benefit to people who are principal residents and have relatively inexpensive homes.” While second-home owners will pay more, they make up only around 15 percent, less than “most people think,” he says.

The Finance Committee has already begun to study the ways in which other towns save money, says Wise. Williamstown, for example, spends less on police and more on roads. Wise wants to know why this is: “Are other towns doing something sensible that we could learn from?”

Wise extols the virtues of longer range planning to avoid big capital surprises every year, the sudden need to replace a fire engine or bridge. There is a $15 million sewer project coming down the pike. “We should be planning 10 years in advance,” he says.

Ideally, he says, the Finance Committee would think forward 10 to 15 years.

But the name-calling he says has been on display in town and Town Hall isn’t very imaginative. Harmonizing both at the micro and macro level is what’s needed, between people and towns, something Wise enjoys. As a man who’s stepped into the fray of local politics as soon as he arrived, he finds the “us verses them dynamic” baffling in a community where one can so easily get involved in local government, where people and government “aren’t an abstraction,” and where one can attend meetings so easily. “It’s curious to me,” says the philosophical Wise. “But it is a lesson in certain universals of human nature.”

In a recent conversation with a lifelong Housatonic resident who feels disconnected from the people he knew growing up, Wise responded that his own experience has been very different. “I’ve been here for four years and I’m astonished at how many people I know.”