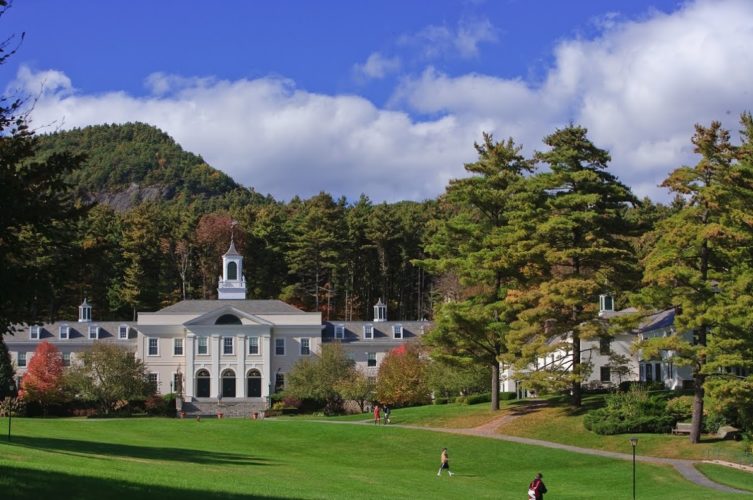 The campus of Berkshire School in Sheffield will reopen, post pandemic, next month. Photo: Chip Riegel/Wikipedia

Berkshire County — As public schools in Berkshire County grapple with reopening plans, some of which include remote-only models, most of the region’s private schools will start the year with a tentative but careful regimen of distance- and in-person learning.

Many of the independent schools in Berkshire County and Litchfield County, Connecticut, are primarily boarding schools, which means there are additional challenges associated with accommodating students who live on campus.

Most of the private school officials contacted by The Edge declined to be interviewed but offered a statement via email and referred us to material on their websites. All said that for on-campus learning, they are guided by state physical distancing and personal protective equipment protocols. All emphasized that their plans are subject to change as conditions warrant.

At Bard College at Simon’s Rock in Great Barrington, the fall semester will be conducted largely in-person, except for students “who are unable to return to campus.” Click here to read a detailed story on the Simon’s Rock reopening by Edge contributor Hannah Van Sickle.

The largest independent school in Berkshire County is Berkshire School in Sheffield. Berkshire has roughly 400 students in grades 9 to 12. Only 10 percent are day students. The rest live in dormitories on campus, as do most of the faculty.

In its posted reopening plan, which is guided by the state Department of Health, Berkshire School says it hired a consulting firm “specializing in solutions to complex environmental and health issues” to review the school’s operations and minimize risks associated with COVID-19.

The school will start the year Tuesday, Sept. 8, with virtual learning for all students. Then there will be a staggered reopening of the campus, with students arriving between Thursday, Sept. 24, and Monday, Sept. 28. Berkshire will allow students who are either unable or unwilling to stay on campus to opt for a remote-only instructional option for the entire first semester at a discounted tuition rate. Berkshire’s fall interscholastic schedule has been suspended until the state’s health and safety protocols allow the school to resume the program.

But Berkshire will have to find a way to accommodate its faculty, many of whom have their own young children who attend local public schools such as the Southern Berkshire Regional School District in Sheffield.

Southern Berkshire is likely to start the year Monday, Sept. 14, with remote-only learning for two weeks, followed by a so-called hybrid model combining virtual and in-person learning, with students remaining at home on some days of the week. The Berkshire Hills Regional School District in Great Barrington will decide on a reopening plan at Thursday night’s school committee meeting, but it will likely be either all-remote to start the year or a hybrid model.

“This leaves many on our faculty and staff with their young children at home to begin the school year in September, but we are working quickly to build an on-campus program for these school-age children that will allow everyone to meet their responsibilities at Berkshire,” the school said on its reopening plan.

“The process is dynamic and ongoing but is driven solely by our commitment to the safety and well-being of our entire community,” Berkshire School told The Edge in a statement attributed to “senior leadership.”

Berkshire Country Day School, which serves approximately 120 students in grades pre-K to nine, will open its Stockbridge campus with a staggered schedule. The focus will be on in-person learning while adhering to social distancing and protective protocols such as face coverings.

Students who cannot attend in-person “will become part of a multi-grade virtual classroom led by a BCD teacher,” according to the BCD reopening plan. Those students would mostly be those who had to self-isolate because they had come into contact with someone who had COVID-19 or an untested person who presented symptoms.

The school is acknowledging the risks associated with reopening. BCD asks parents to work with the school to ensure that students wear masks, keep students home if they have symptoms of the virus, and to abide by public health guidelines to limit the spread of the virus and “to keep our campus open.” Still, the school will ask parents “to sign a waiver indicating you accept the inherent risks of reopening,” the reopening plans says.

BCD Head of School Jenifer Fox said the school has been divided into four cohorts of two grades apiece. At some point, the school may decide to close a cohort or the entire school based on an outbreak of the virus. An outbreak will be defined by a daily absentee rate of more than 10% of the total number of students out with COVID-19-related absences on two consecutive days.

In an interview, Fox said it was a tough call but she and other school officials felt in-person learning should be pursued cautiously if it could be done safely. And they felt that, for now, the benefits outweigh the risks.

“Distance learning is fine but it’s no substitute for being able to be with kids,” Fox said.

Fox added that crafting and organizing a reopening plan has been an extremely time-consuming process for her school’s relatively small team.

“It’s extraordinary,” said Fox, who had just emerged from a morning staff meeting of several hours. “I’ve been up until 3 and 4 in the morning on some days getting plans and things together because just opening up a school alone is a huge push uphill, and then this added to it makes it just almost a little bit too much. But we’re doing the work and we’ll be ready for the kids when they arrive.”

At Miss Hall’s School in Pittsfield, a boarding and day school for girls, school officials have come up with a new academic schedule “designed with maximum flexibility to serve both on-campus and online learners, emphasizing active learning and deep engagement.”

At the Hotchkiss School in Lakeville, Connecticut, a boarding and day school of some 600 pupils, incoming students will be asked to self-quarantine for 14 days at home before arriving at the campus.

For students coming from certain states, Connecticut Gov. Ned Lamont is currently requiring people to quarantine for two weeks within Connecticut before entering the general population.

“The School is investigating opportunities to assist families in securing space on or near campus for pre-school quarantine,” Hotchkiss said on its website. Meals will be delivered to student rooms during this period. Day students will complete the quarantine period at home.