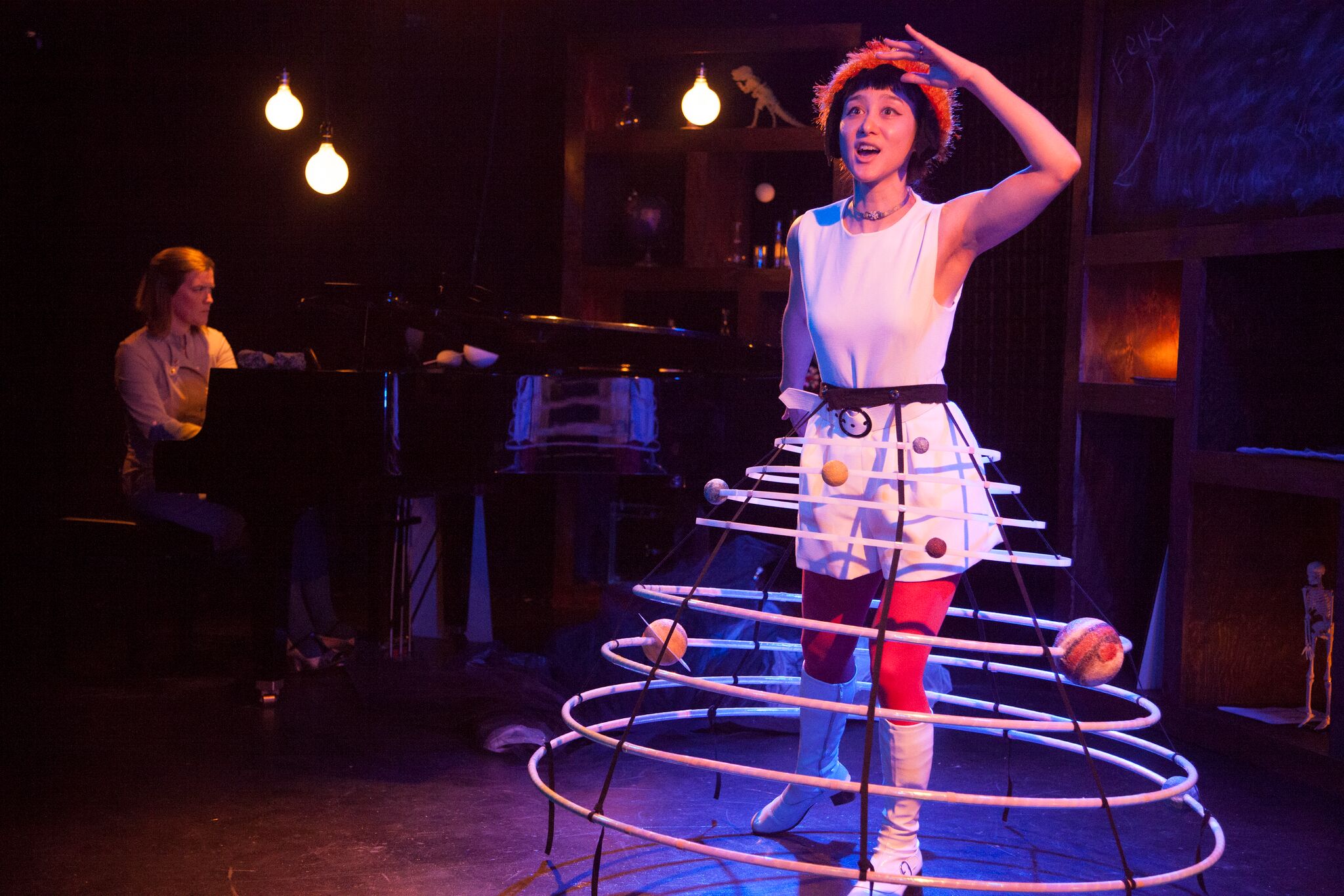 Science geeks get their day in the concert hall with Hai-Ting Chinn’s ‘Science Fair,’ an ‘opera with experiments’

Hudson, N.Y. — On a warm day in late September, mezzo-soprano Hai-Ting Chinn sat for an interview at an open-air cafe on 44th Street in midtown Manhattan. Dressed conservatively and sporting a prim, black choker, she looked pretty much like any other young, Yale-educated, musically gifted science geek of mixed Chinese and Jewish ancestry. So you’d have no way of guessing that one of her greatest not-so-secret pleasures is donning a wearable model of the solar system and vocalizing rhapsodically about stuff like compression waves and subatomic particles. Chinn sees genuine beauty in these things and wants all of us to enjoy the aesthetic pleasures of contemplating science’s most elegant axioms. For this reason, she put together a fully staged “opera with experiments” that celebrates the beauty inherent in all things scientific. The product of a multi-year residency at HERE Arts Center in New York City, “Science Fair” is nothing less than a smorgasbord of scientific delicacies. This “love-song to science” is 70 minutes long, and you can hear the whole enchilada when she takes the stage with pianist Erika Switzer at Hudson Opera House Saturday, Oct. 26, at 7 p.m.

In an age when superstition and the politics of willful ignorance threaten to undermine the foundations of reasoned thinking, science is increasingly under attack from those who prefer totalitarian certainty over rational inquiry. But, as Chinn points out, our theoretical models must match reality. And that’s one reason why “Science Fair” is important. Another is that talking (and singing) about amazing natural phenomena is fun.

The texts of “Science Fair” make for college-level discussions on a range of scientific topics: the formation of the solar system; DNA; compression (sound) waves; atoms; the origins of life; movement patterns of heavenly bodies; the history of the universe. The writers include an astronomer, a chemist, a physicist, and a middle-school science teacher. Matthew Schickele, Renée Favand-See, Stefan Weisman and Conrad Cummings wrote the music.

Chinn’s knack for entertaining audiences with scientific demonstrations makes her something of a modern-day Humphry Davy. (Davy is the 19th-century scientist famous for giving wildly popular lectures that blurred the line between entertainment and education.)

Chinn has worked with Philip Glass, Matthew Schickele, Conrad Cummings, Yoav Gal, Renée Favand-See, Amy Beth Kirsten, Tarik O’Regan, Ellen Reid, Stefan Weisman, Du Yun and many other practitioners of contemporary concert music. But not all of her repertoire is contemporary — not nearly. She has played Didone in “La Didone,” Poppea in “L’Incoronazione di Poppea,” Medea in “Giasone,” Hansel in “Hansel and Gretel,” Dorabella in “Così fan tutte” and other traditional operatic roles. (In fact, she’s quite good at singing the older repertory, which is why people like Philip Glass like to use her on material that requires pristine, classically polished tone, which she possesses in spades.)

Chinn laughs easily and often, so it should come as no surprise that her opera reflects her own geeky sense of humor. But her jokes are subtle and sophisticated (no potty humor in Ms. Chinn’s laboratory — sorry, kids!) And it probably helps that her father-in-law is Peter Schickele, one of the most important musical humorists of the last 100 years or so. How could the old master of fractured oratorio not be a profound inspiration to her? (Chinn is married to Matthew Schickele, Peter Schickele’s son.)

Humans have a long history of decorating scientific terminology with music. Tom Lehrer did it brilliantly in 1959 when he set the names of the chemical elements to the tune of the “Major-General’s Song” from Gilbert and Sullivan’s “Pirates of Penzance.” But Chinn is quick to point out that “Science Fair” is not about decorating anything. Rather, it is about revealing the beauty found not only in the visible and palpable outcomes of natural processes but, most especially, in science’s most abstract concepts: “The beauty of science,” said Chinn, “is in the bare facts.”

Please do not attempt to replicate Hai-Ting Chinn’s experiments at home. It’s all fun and games until someone loses an eye.