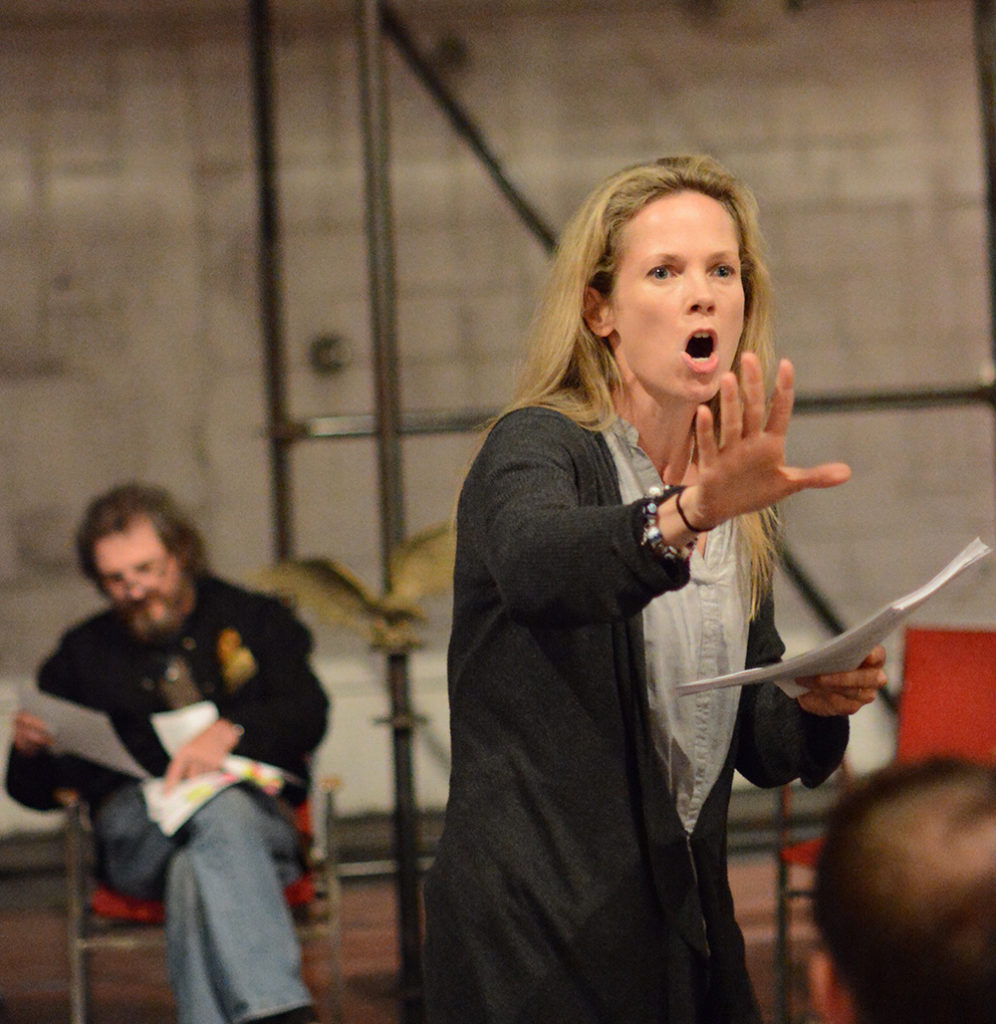 PREVIEW: ‘Cymbeline’ at Shakespeare & Company, a play for our time

In this first summer of Trump, while many American theatre companies mount more obvious, politically pointed plays that sometimes draw vitriolic, and even off-the-mark criticism, Tina Packer and Shakespeare & Company in Lenox are preparing Cymbeline, a complex, late Shakespeare play which seems not to have been produced in this country in anybody’s memory. As an inveterate reader, sometime performer, and devoted devourer of Shakespeare plays on stage, I was immediately curious. Why was a play so highly prized in previous centuries so neglected recently? And why had Shakespeare & Company decided to do it now? In an effort to understand the company’s choice, I asked for a copy of the script, to observe an hour or two of the work in progress, and to speak with the director and well-known Shakespeare expert, Tina Packer. Instead, I was generously invited to spend a full Sunday with cast and crew, observing music and fight rehearsals as well as the first “stumble through,” and then attend a private director’s meeting including coaches and assistants, followed by a one-on-one conversation with Packer. There is no doubt that Shakespeare & Company believes in Cymbeline. 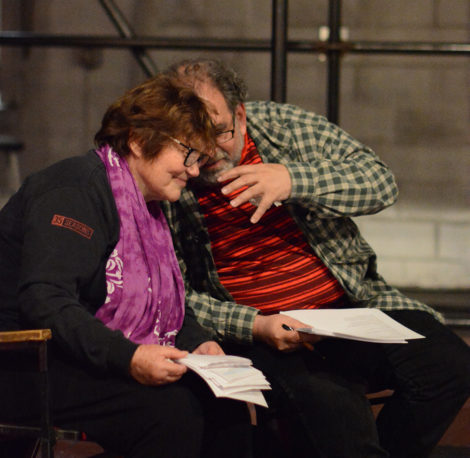 When I arrive at 10 a.m., the actors I talk to are enthusiastic — even on a Sunday. Tina Packer admits she has wanted to direct this play for years, drawn by its dance between the conscious and the unconscious, what’s seen and unseen, and its exploration of the physical and ethical dimensions of who and what the characters are. Add to this the characters’ own understandings and misunderstandings of who and what they are, and their rapid, revealing changes throughout the play, and I see its relevance for our own confusing times, but it actually takes place during Imperial Rome’s domination of the world. Imperial Rome, the New York or London of its day was riding high, attracting ambitious people from everywhere, forming complicated alliances, demanding tribute from the lands it subdued and protected. The scenes in the Tina Packer Playhouse are set in Rome, the sophisticated power, Britain, the cheeky up-and-comer, and Wales, the unpredictable outlier. The stage is dominated by three major images set high above the action: a classical lady reminiscent of America’s Lady Liberty or Boadicea, the British Warrior Queen, a typical Roman representation of Jupiter looking like the American Eagle, and a gigantic book of laws. Packer has cast nine actors to perform thirty roles. What may have started as economic necessity turns out to be a stroke of genius. 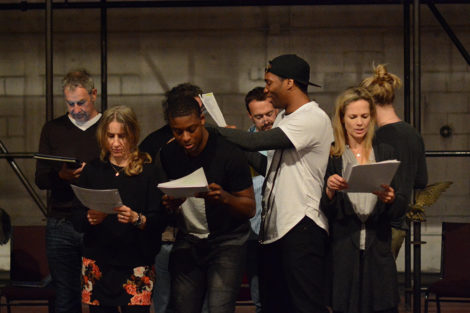 Because while the characters themselves may occasionally feel confused, racing around in their exciting, complicated story, trying to hold onto its through lines, I, their audience of one on this day in June, 2017 am not confused, but amazed. I’m watching the cast’s initial attempt at doing the entire play in sequence — without full costumes, lights, sound, or final cues, and it is as clear and immediate as “The New York Times,” NPR, or a television news program. In front of me, reality and illusion are deliberately blurred by some of the characters’ self-deceptions (for example, Cymbeline, the king “believes” his second wife, the queen, really loves him and his daughter Imogen from his first, long deceased wife while I recognize she’s obviously lying). The play includes kidnapped British princelings, a Roman womanizer named Iachimo who hides in a wooden chest, a headless body, exchanged love tokens, and one of the most notorious/innocent moles in all of literature. The queen’s son Cloten is unworthy and devious one moment, and a cloddish idiot the next. Imogen’s husband Posthumous Leonatus is presented as a commoner, who is nonetheless noble and loving as well as gullible and vindictive. And everything swirls around the obvious center of Cymbeline’s thought and action: Imogen, one of Shakespeare’s strongest creations.

Packer assures me that the character of Imogen, like other women Shakespeare wrote in his later plays was enriched by his experiences as the father of his daughter, Susanna, when he retired to Stratford to write and to live out the rest of his days with his family. Yet the playwright is still very much a 17th century man. In Cymbeline, he has Posthumous hurl a demeaning, passionate anti-woman rant directly at the audience when he believes Imogen has been unfaithful to him. Imogen, celebrated for centuries for various aspects of her character and behavior (sometimes courage, sometimes tenacity, sometimes chastity) was a role coveted by actresses as celebrated as Ellen Terry in the nineteenth century and Dame Peggy Ashcroft in the twentieth. She is one of the most stalwart young women in the canon. 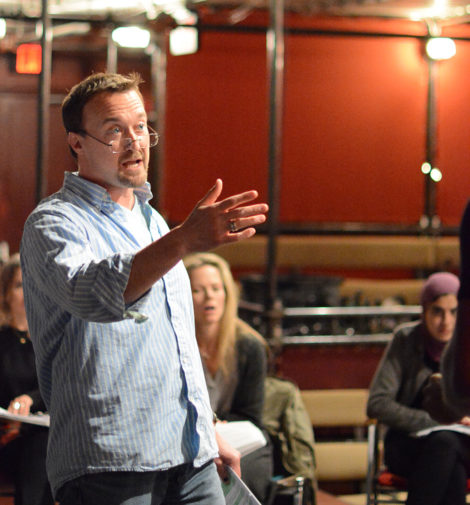 Josh Aaron McCabe in rehearsal at Shakespeare and Company. Photo by: Olivia Winslow

Although deceptively praised and plotted against by her stepmother, lied about by a vicious Roman who has made a nasty bet against her purity, reviled and attacked by the husband she loves, valued by her father and the realm only because her brothers have disappeared, and generally devalued by society as a faithless wife, Imogen yet becomes the moral center of the play. Despite the misunderstandings and attacks of others, she holds onto her belief in love and marriage, and in a compassionate worldview based on life and goodness. Like so many of Shakespeare’s heroines, she seeks the advantages of the male sex by assuming the persona of a young man, yet she never abandons her valuable female qualities. I am shocked at the speed with which she embraces this survival option after being told by her husband’s servant, Pisanio, that he has been ordered to kill her (a seemingly sanctioned “honor killing”) because he wrongly believes she succumbed to the blandishments of lying Iachimo. But this decisiveness is inherent to Imogen’s bravery and good sense. Wouldn’t you take the risk of wearing men’s clothes to struggle through the wild and live by your wits rather than face certain death at home in Britain hemmed in by skirts?

Exchanges of letters drive the plot and confuse the characters in Cymbeline, and those letters, Pisanio’s desperate stratagem, and Imogen’s clear, ethical explanations work to sort things out. Hundreds of years after the play’s original performance in London, probably in 1611, I sit on the edge of my seat in Lenox, Massachusetts, as actors playing Romans and Britains on another stage kill each other once again over whether Britain will pay its NATO-like assessment. I’m caught up in wondering if Imogen should or will forgive Leonatus, and whether the king and his unjustly banished warrior named Belarius, (who, in revenge, stole the king’s sons twenty years ago and reared them as his own) will or can make peace. I’m bemused by a poisonous elixir of elastic efficacy developed by the court doctor, who, when the scheming queen dies, drops one of the best one-liners I’ve ever heard in a theatre. 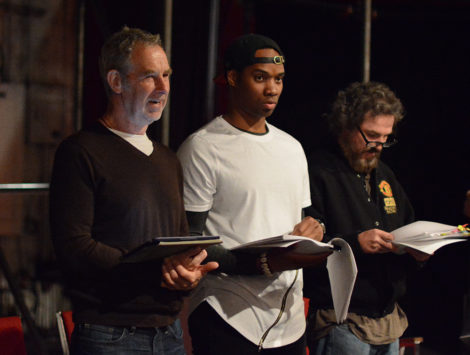 Later in the afternoon, one of the actors, Tamara Hickey twists an ankle in a particularly physical scene. The house hushes with concern. There’s an almost instantaneous arrival of the company’s chiropractor to examine her ankle and give advice. Ice bags and air casts materialize. After a few minutes rest, the actress returns to the stage to continue her brave role as Imogen. Relieved, supportive applause erupts around her. The players, protected by Actors Equity, finish their work at 3 p.m. This is their “short” day. Tomorrow, Monday will be “dark,” the traditional day off. As a result of the ankle injury, the actors have not had time to rehearse the concluding scene with the soothsayer and its references to the cabala. I will have to wait until the play opens to see that. I decamp to the green room with director Packer, whose job it is to pull all this together. She and her assistants analyze the day’s work and develop their plan for Tuesday’s continuation.

Shakespeare & Company’s new Artistic Director Allyn Burrows pokes in his head to assure everyone that he believes Hickey will be fine by Tuesday. Then he reports on a spate of hate mail he’s receiving for supporting other theatres’ artistic freedom in an interview with “The Boston Globe.” He says he views it as “part of the conversation.” Everyone sighs. This is the Berkshires; Cymbeline won’t even open until July 8th, but no one is surprised. Theatre struggles in all places and ages. Among the arts, it is perhaps the one where thoughts and feelings are most exposed. In Shakespeare’s day, the London playhouses were repeatedly closed by the Puritans. In the 1970’s, Tina Packer left England for the United States supported by a grant from The Ford Foundation to study Shakespeare. She stayed because she believed women in the theatre had more opportunities here, and in 1978 she became one of the founders of Shakespeare & Company. She has always believed in working hard and well, and in speaking truth to power, so in an America which now shows itself wary of ideas, ambivalent towards powerful women and resistant to people from other parts of the world, she perseveres. Although she stepped down as Artistic Director of Shakespeare & Company in 2009, she is a leader here, a pivotal participant in its current season, a season filled with challenging ideas, artists of many races, genders and ethnicities, and numerous women who are playwrights and directors. But why Cymbeline? Why this year? Tina Packer underscores her desire to remind audiences yet again of the adventures and achievements of plucky Imogen. She smiles and says, “she persisted.”