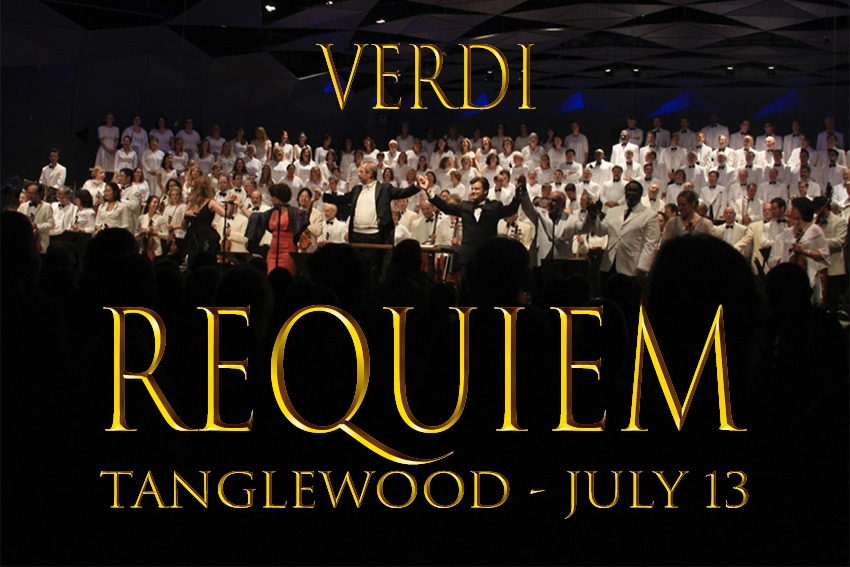 Lenox — When the Boston Symphony Orchestra last performed Verdi’s Requiem at Tanglewood (July 2013), the circumstances were quite a bit different from those we’ll encounter this Saturday, July 13, as the Boston Symphony Orchestra, Andris Nelsons, and the Tanglewood Festival Chorus take on Verdi’s genre-straddling piece once again. This time, there will be no freakish bad luck. This time, the performance will be everything we hoped for in 2013.

First, there was the concussion: Just a few days before the concert, Andris Nelsons bumped his head, went to bed and didn’t get over to Lenox until the following summer. That’s right: Mr. Nelsons was absent for his much-anticipated debut as the BSO’s music director-designate. Everyone was disappointed, especially the musicians of the Boston Symphony Orchestra. (Not to mention Mr. Nelsons.)

This is exactly the sort of situation that would make most orchestra administrators drink whiskey straight from the bottle. But it was business as usual for BSO artistic administrator Anthony Fogg, whose virtual rolodex contains the names of more than a few world-class conductors. One of them — Carlo Montanaro — would be available to conduct the BSO in Verdi’s Requiem on the night of Nelsons’ absence.

Dozens of pieces in the standard orchestral repertoire make good choices for conductors who must prepare a performance on extremely short notice. Verdi’s Requiem is not one of them. But the only choices Mr. Montanaro had were “yes” or “no.” He is a conductor mainly of opera. Verdi is a composer mainly of opera. But the Requiem certainly is not opera. Rather, it is operatically styled religious music, not exactly Montanaro’s specialty.

Considering all he was up against, Montanaro did a fine job. But, of course, not all were satisfied: One listener thought the “Dies Irae” had been taken too quickly, another that it had been taken too slowly. Or the balance between singers and orchestra wasn’t right. Some even found fault with Montanaro’s stage attire.

The crowd that evening was savvy. They knew the singers and players had done an excellent job, and they said so loudly.

The BSO has nothing but good luck on their calendar for the evening of Saturday, July 13.