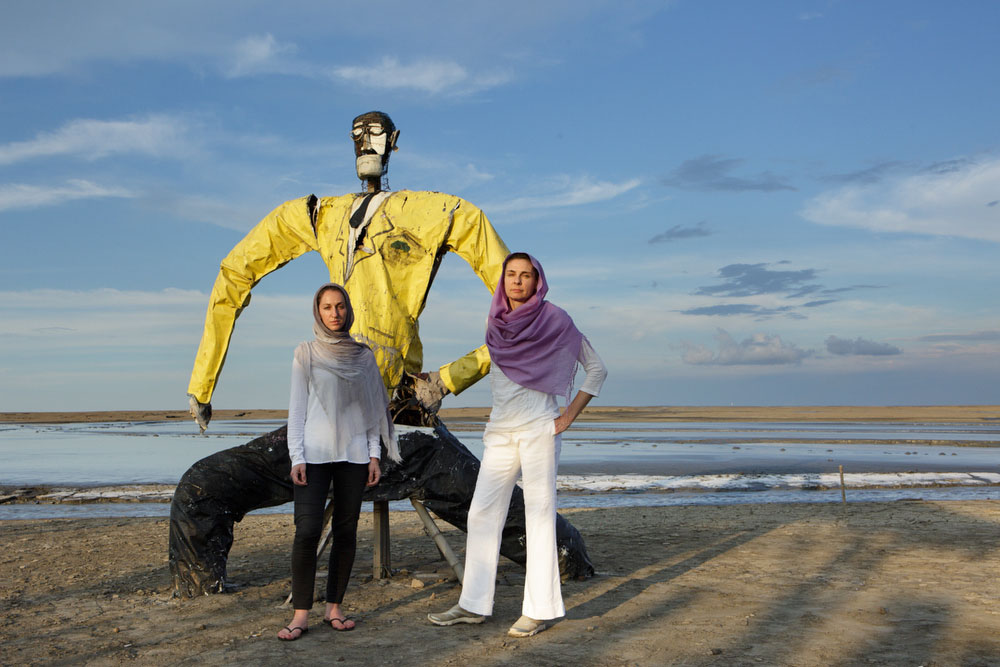 Great Barrington — “We could all use a little more Mr. Rogers right now,” noted Kelley Vickery, founder and artistic director of the Berkshire International Film Festival, which begins Thursday, May 31, and continues through Sunday, June 3. The closing night film, “Won’t You Be My Neighbor?” about Mister Fred Rogers has been overwhelmingly and enthusiastically received. His message of diversity and inclusivity would be much appreciated today with the present difficult political climate.

I don’t usually begin a preview of a film festival with it’s closing film, but this is not a usual year. I have looked at the 80 films from 27 countries (from Iceland to Indonesia) with a different eye, hoping for some relief from the chaos and “breaking news” aspect of our daily news cycle. I am still interested in the documentaries from war-torn areas of our globe and dramas of family strife, but there also needs to be some relief — some comic relief — and I think this festival successfully provides both.

The Academy Award-winning director of “Won’t You Be My Neighbor?” has been honored in the past at BIFF with two opening-night films. Morgan Neville directed “20 Feet from Stardom,” which won an Academy Award for Best Documentary Feature, and “The Music of Strangers: Yo-Yo Ma and the Silk Road Ensemble.” This new film was produced by Yo-Yo Ma’s son, Nicholas Ma, and he was fortunate enough to perform on Mr. Rogers show with his father — twice! Yo-Yo Ma and Mr. Rogers had become friends after his appearances on his show and he had advised Yo-Yo Ma on how to handle his fame for good in the world. Mr. Neville became intrigued with this aspect of Fred Rogers and decided to investigate his work on this show. His unconditional love for the children and his kind and gentle manner was very appreciated by his young fans. Mr. Neville said: “He was such a warm, moral character. He had no agenda other than goodness. I can’t think of any voice I wanted to hear in this day and age more than his.” He inspired children with his kindness and compassion — we could certainly use more of this in today’s political climate. One Rogers fan said, “He taught my kids to be kind.” As the Buddhists believe, one of the secrets to a good life is “just be kind.”

This year, the festival does not open with the usual documentary, but a docudrama, “American Animals,” which Kelley Vickery has described as a “fantastic” film. It is a thriller of an art heist, based on a true story, and what makes it very interesting is the break in the fourth wall. It is a narrative film, but there are documentary-style interviews with the real characters on which the story is based. I’m really looking forward to it.

One of my favorite actors is being honored Friday night for the special tribute event. The British actress, Rachel Weisz, who has been in over 64 movies in the past 25 years and won an Academy Award and Golden Globe for her work in “The Constant Gardener,” will be honored. I have followed her career and have found her always interesting in her many varied and challenging roles. When you look at the scope of her work, you understand why she has been nominated for BAFTAs, Academy Awards and Golden Globes. David Edelstein, chief film critic for New York Magazine, will have a conversation with her that should be fascinating to her many fans before the screening of her film. There will be also be a trailer of her varied film roles before the showing of the most recent, very well-received film “Disobedience” (This film was directed by Sebastian Lelio, who won best Foreign Language Film this year for “A Fantastic Woman”). “Disobedience” sounds very intriguing — a woman in London who grew up in an ultra-Orthodox Jewish community is basically banished by her community due to her youthful sexual experimentation. A heavy drama with great performances by Alessandro Nivolo, Rachel Weisz and Rachel McAdam, it is highlight of this incredibly rich festival!

Every year it seems we are given a new forum to enjoy films (last year the Tea Talks were introduced) and, this year, we will have, on Saturday night, a live-staged reading of Stephen Glantz’s screenplay for the upcoming film “Mumbet.” She was the original courageous woman, way before the #MeToo movement and also a Berkshires resident. Elizabeth “Mumbet” Freeman sued for her freedom from slavery 80 years before the Emancipation Proclamation. And she won it. She is true local hero and a positive symbol of African-American history. Director/producer Alethea Root, producer Kim Waltrip, executive producers Jayne Atkinson and Elizabeth Aspenlieder, co-producer Jana Laiz, Diane Pearlman and Jameelah Nuruddin, production designer Carl Sprague and costume designer Kevin Draves (a shoutout to my Hillsdale neighbor!) will all be present. Recent news: Octavia Spencer has signed on as executive producer! Former Governor Deval Patrick and Rep. William “Smitty” Pignatelli. D-Lenox, are also expected. It should be an interesting evening.

The Tea Talks were very successful last year and they are continuing this coming Saturday morning with Charles Randolph (Academy Award winner for Best Writing Adapted Screenplay for “The Big Short”) in conversation with Gregory Crewdson (the fine art photographer and director of graduate studies in photography at Yale School of Art, who is now a full-time Berkshire resident).

Cynthia Wade will be subject of the second Tea Talk on Saturday afternoon. She will be discussing her new documentary, “Grit,” about an environmental disaster in East Java, Indonesia. The heroine of the film, Dian, has transformed herself into a politically active teenager questioning the role of corporate power and money in democracy. There will be a question-and-answer session with director, cast and crew after the showing of the film.

The last Tea Talk is a sneak preview on Sunday afternoon. All they will tell us is that it was shot in this area and includes an Emmy Award-winning actress and a wonderful ensemble cast. The director and members of the cast and crew will be in attendance for a question-and-answer session after the film.

And there’s more. The opening night in Pittsfield will have the award-winning documentary “Bad Reputation.” Joan Jett is the subject of this film, an amazing survivor from the 1970s punk scene. She has been described as a feminist, punk goddess and rock ’n’ roll icon. There are amazing interviews with Miley Cyrus, Billie Joe Armstrong and Iggy Pop, as well as incredible archival footage. You are guaranteed to walk out of the theatre singing, “I love rock and roll”!

I would like to alert you to one documentary that delves into a topic that affects 38 million Americans and nearly one billion people worldwide. I spoke at length to Susanna Styron, the writer and director of “Out of My Head,” a documentary about migraine headaches. This is apparently a widely misunderstood and stigmatized disease which isn’t just a mere headache, but actually a neurological condition. It is a fascinating syndrome which, at present, has no cure, but there are ways to make it more manageable. Her daughter, Emma, first presented with optical symptoms and they began an exploration for ways to treat her illness. Ms. Styron interviewed many experts and migraine sufferers (“migraineurs” is the term) to help in her medical-mystery journey. It sounded very compelling when she told me of the “Alice in Wonderland Syndrome” that Lewis Carroll so beautifully expressed in his novel. The “getting too tall and getting too small” is a very common part of migraine aura symptoms. Also, the Mad Hatter party with the aphasia and the “gibberish” — yes, that is all part of migraine symptoms. Other fellow sufferers are Sigmund Freud, Joan Didion (who wrote the essay “In Bed” about her personal experiences with migraines), Thomas Jefferson and Siri Hustvedt. I am looking forward to finding out more about this disease that so many people have and yet there is shame associated with it — why?

“House of Teeth” is a short narrative film also by Susanna Styron. She said that the only thing the two films have in common is a strong mother/daughter relationship. This film has been described as a funny, poignant crowd-pleaser about a divorcee who is told by her daughter that she needs to “get back into the game.” This film is fun and should help lift your spirits after seeing the migraine movie (which, I am told, is done in an entertaining fashion with animation, etc.).

“Three Identical Strangers” is a documentary that intrigues me because I remember when the events unfolded in the New York metropolitan area. It was a big story at the time (1980) — three identical triplets are adopted by three different families and, by chance, are reunited. It sounds like a happy story — they open a successful upscale Romanian restaurant called Triplets — but there is a dark side to the story. See the movie and find out what happened to the triplets.

“The Long Dumb Road” is a film that will provide some comic relief. I spoke with the director, Hannah Fidell, who said she hoped that her movie would “provide 90 minutes for the audience to have a fun ride and an escape from the news cycle.” Ms. Fidell has been at BIFF before (“A Teacher,” 2013) and is a young filmmaker to watch. Her first two films were very serious (”Six Years”) but this film has her going in a different comedic direction. She chose two wildly different actors to play off each other in this odd-couple road trip. Jason Mantzoukas (“The League”) is a very manic and hilarious actor juxtaposed with the subtle and charming Tony Revolori (the Lobby Boy in “The Grand Budapest Hotel”). The conceit is that Tony’s character is driving to college in Los Angeles from Austin, Texas, and his car inconveniently breaks down. Magically, Jason’s character appears and, coincidentally, he is a recently fired car mechanic. Tony picks up this dubious hitchhiker. The duo has nothing in common but, apparently, they become delightful companions, learning life lessons from each other — very good buzz on this film.

Oh, and one last mention about a very timely short — part of Short Program #1 — which I think we should all try and view. It is an 11-minute documentary by Julia Neumann called “Deporting Myself,” about an undocumented New York housekeeper. ShIFFe is so fearful that she will be deported after President Trump’s threats that she has decided to “deport herself.” Zsuzsanna is a hard-working woman who stayed almost 20 years in this country and it had become home. This is a story that is being played out all over the country to heartbreaking effect.

So I hope I have given you some tastes of the delicious film feast that will be unfolding in the next four days. Please look over your BIFF program and choose wisely! You really can’t go wrong — just the heartbreak of not seeing EVERYTHING! There is enough to see to buoy up our lagging spirits! See you at the festival!!

For information and tickets, see the Berkshire Edge calendar.