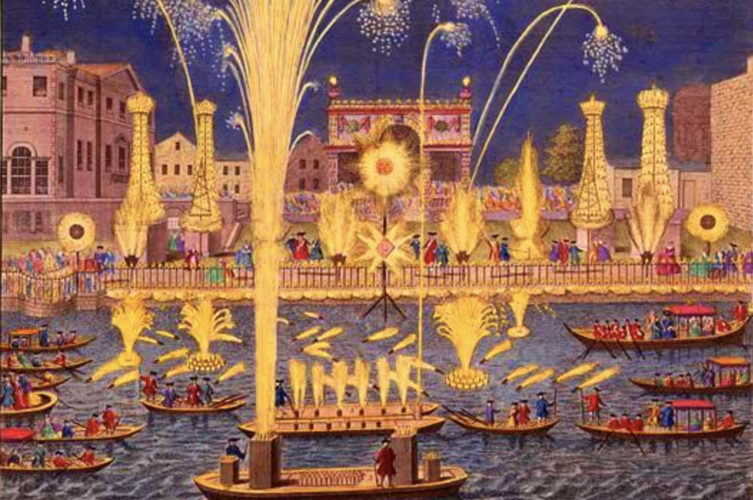 Illustration, Handel's Music for the Royal Fireworks. Art by Voorwaarden Bekijken, in the public domain.

Great Barrington — It’s almost time for the Berkshire Bach Society’s annual “Bach at New Year’s” shows. Their most recent New Year’s appearance (held last April to fête COVID-19) had the Berkshire Bach Ensemble playing all of the Brandenburg concerti in one sitting. This year, they’re presenting a “Baroque Concerto Showcase” featuring some of Bach’s greatest hits, along with favorites from Rameau, Telemann, Vivaldi, and Handel. Grammy-winning violinist Eugene Drucker (Emerson String Quartet) is back to lead the group in three performances of a “Baroque Concerto Showcase.”

Here’s their schedule of performances:

And here are the works on their program:

Only great music could tempt novelist Kurt Vonnegut to stray from his atheistic faith. And we have good reason to suppose that among composers of awe-inspiring music, J. S. Bach ranked highest in Vonnegut’s estimation. It only figures that if music has charms to soothe the savage novelist, then great music probably has something to offer such rank-and-file victims of the year 2022 as you and me. This seems to be especially likely in the case of music from J. S. Bach.

In “Music in the Castle of Heaven,” conductor and Bach pioneer John Eliot Gardiner makes the case that J. S. Bach’s sacred music is more relevant to our modern condition than that of any other Baroque composer.

And the main reason, he asserts, is that Bach’s music represents a personal testament to his own beliefs, while his contemporaries, (especially Telemann, whose salary in Hamburg was triple that of Bach’s in Leipzig) made music that represented, for the most part, a desire to make money. (We never hear about J. S. Bach’s meteoric rise to power and wealth, but we do hear about Telemann’s.) “Testimonial expressivity,” Gardiner insists, “remains Bach’s special prerogative among Baroque composers.”

But Gardiner sees all of Bach’s music—not just the sacred—as “a universal message of hope that can touch anybody regardless of culture, religious denomination or musical knowledge.”