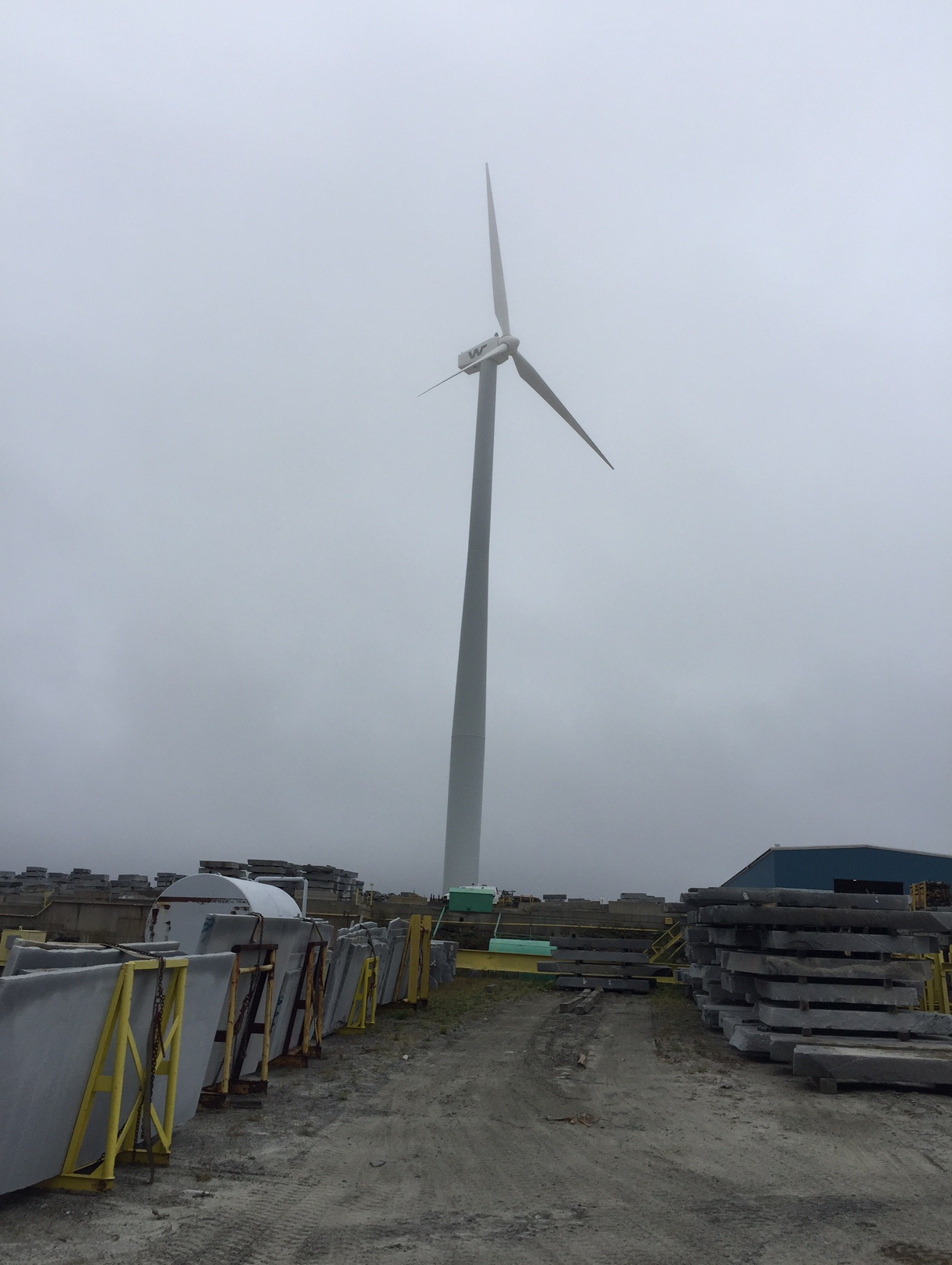 East Otis — Deep in the woods here, where wild turkeys conduct busy roadside affairs and where the occasional moose steps out to the sound of screeching tires, the colors turn from the greens and reds of fall to shades of gray at the end of a dirt road, where a company that supplies granite curbing to everyone west of Worcester makes twice its own electricity and adds the runover to the power grid.

Williams Stone Company, Inc. sits on 30 acres “carved out of the wilderness,” as C.E.O. Edwin Williams put it, and fuels its quarrying and stonecutting operation with one continuously running wind turbine that after 6 years of operation has already paid for its $1.7 million price tag. It is a small turbine — small by today’s standards.

A ride around the site in Williams’ pickup reveals row after row of granite slabs; it’s hard to fathom the weight loads involved in this enterprise. The Lee native says he’s done it all in this trade as long as he can remember, working with his father since “before kindergarten.”

The $20 million a year company — “granite by the foot or by the mile” — is a part owner of a vast quarry in Georgia, which supplies 96 percent of the company’s granite, and hauls 400 tons a day, 900 miles by rail, to Westfield before it is trucked to East Otis. Here it is cut and sent as far away as Ohio and Virginia. Closer to home, Great Barrington’s Main Street now sports the Georgia granite variety. The 100-year-old quarry at company headquarters here is comparatively small —this one goes deeper and deeper, and continues, in a Mines of Moria fashion.

Williams, whose parents Lester Williams and Verna Stone started the company in 1947, says the turbine fits the company’s commitment to self-containment. The company is now owned by its 45 employees and doesn’t take on debt, which means, for instance, that when the turbine’s recommended gearbox replacement comes up in the next five years or so, the company will shell out for the upgrade, which Williams says he guesses will cost around $225,000. More than half the maintenance, he added, is done by Williams Stone employees.

When Gov. Deval Patrick was in office, he had a grand tour. “I thought he was just going to make a speech,” Williams said, “but he wanted to see everything. It was unforgettable that he took the time.”

Two men are manning large computer monitors, in what looks like a control room in the “office.” Beyond it are hard-hat signs and the sounds of machinery. In the conference room, the walls are hung with granite samples and photos of the two quarries from which they come. Engineering plans lay open on the glass table. A dry erase board is filled with quotes, including one from Bill Gates: “Success is a lousy teacher. It seduces men into thinking they can’t be wrong.”

Today the turbine is still; it needs preventative work and a repair. In the morning fog it looms eerily; its height is jarring until you get used to it. And it is planted right in the middle of the company’s 30 acres. Williams said it wasn’t a decision to put it in the center, but that’s just how it turned out. He said deciding to get a turbine was like getting married. “We figured it was the right thing to do.” He thinks he chose wisely.

“What mechanical in your life runs continuously, except when the wind doesn’t blow?” Williams said.

“It’s high tech and that scares us. But it’s done a good job so far.”

Good, indeed. There’s no electricity bill. Williams says his company could run on the equivalent of two large highway truck engines. Power beyond what is used is “gravy train,” he added. And the company has a $40,000 utility credit that can be used at some point. “I can apply it to my home bill,” Williams said, as an example. But Williams said the company plans to let it accumulate.

Williams wishes there were more turbines. “What are your options if consumption of electricity increases?” he said, ticking off methods that are now considered unpopular and unsustainable.

Then there are those who don’t want to see or hear a humming turbine in their backyards, even though lots of people come up to the company to have a look at the one here, Williams said. He says turbines need to be sited properly, and that the overall benefit outweighs most complaints by “a certain subversive group that is opposed to any project.”

But your average small town crank is nothing compared to the power company, which Williams says “doesn’t like turbines.” Yet to use a turbine, you have to connect to their grid.

These are thorny brambles to hack through. And according to Williams, the Town of Otis has found itself in Prince Charming’s shoes with it’s $6.4 million turbine project — voted on in early August by an 83-12 margin — to put in a giant turbine – far larger than the turbine now at Williams Stone — to run the town and throw off enough extra to sell it to a bunch of other towns and school districts. It was predicted to save the town $100,000 annually and generate enough income to pay for itself.

“I gave the town property next to this one,” Williams said of his donation of 36 acres right next to the Williams Stone property. “It’s a perfect spot, good wind.”

Williams goes on to say that Eversource, the power company whose grid Otis will hook into, is making it “so difficult…artificially expensive” for the town, that the project is now on the rocks. Williams said he thought that Eversource was going to charge the town an excessive amount to get hooked to the grid.

“It’s tragic for something this good,” he said. He said the town should “duke it out” with Eversource.

Otis Building Inspector Larry Gould is also Chairman of Otis’ Energy Committee. He said he was unable to comment because of ongoing negotiations with Eversource.

“When anyone wants to generate power and connect to the grid, that customer is required by the DPU (Department of Public Utilities) to pay for any modification to the system in order for them to send power to the grid through our electric lines.” Ress said that in Otis, for example, a stand alone wind turbine “will be exporting most of that power, so we have to look at that circuit and make sure that the power can be fed safely through the lines.

“Any project of this size will need new equipment. And it is expensive to build changes to the existing distribution system. The customer has to pay for extensive studies and construction costs.” Ress said that there are rules and a tariff that applies to those feeding the grid, and “it requires the customer to pay these costs because the costs can’t be paid by other rate payers who don’t benefit from a customer owner generation facility.

Ress said that because the Otis turbine will be so much larger than the one at Williams Stone, it will have to handle more of what in power company parlance is known as “load.”

“They’re running wild,” Williams said of the power companies. “They don’t have to answer to anyone.”

At the Statehouse today, there was a hearing to consider a wide range of energy-related bills. Ben Hellerstein, State Director for Environment Massachusetts, said that “Massachusetts has long been a leader in the fight against global warming.

“The good news is that these solutions are at our fingertips. Solar, wind, and energy efficiency are already helping to reduce our carbon emissions, and they are growing rapidly. With the right policies in place, we can meet a large portion of Massachusetts’ energy needs from clean, renewable sources within the next few years.”

“If you want to drag your feet,” he added, “you’re going to get run over.”