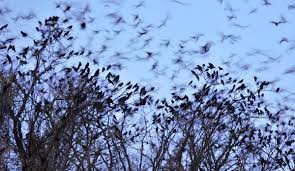 Tommy came into my life one morning in late spring of my fifth year. My father was driving the four kids to school, down the mile-long dirt track of our driveway. Suddenly, he stopped the car and jumped out. I remember watching him through the front windshield, bent over, chasing something. He returned with a crow, too young to fly, fallen from its nest.

Tommy spent his initial days with us in a cardboard box, my mother feeding him with an eye-dropper. The box was replaced by a birdcage, where my mother would dangle night crawlers through the thin bars from her naked fingers. A friend of my parents memorialized this scene in a painting­—complete with gagging onlookers.

The family discussed reports of crows having learned, parrot-like, to speak English — after their tongues were split. Mercifully, this was an avenue left unexplored.

That summer Tommy grew up. I have a strong vision of him riding around the yard on the back of Doty, our Doberman. He was also a familiar fixture on my shoulder. Learning to fly, Tommy began to exercise his options. He would fly to the tops of the trees that surrounded the clearing where our house sat. Miraculously, when I called him, he would return and alight on my shoulder.

One day Tommy flew off, never to be seen again. I remember the heartbreak, calling out his name to the wind and trees for days on end. I see that little boy — a diminutive figure in a clearing, issuing plaintive calls. The descending camera, zooms in on the boy, then, drawing back, rises slowly, following his voice and pans across the tree tops. No Tommy.

There may have been other explanations to a small boy, but the one I came away with was that Tommy had tried to join the other crows and had been killed by them, because he bore the human scent — a reunification scene, rife with hope and love, undone by a tragic flaw that he carried unknowingly within him — the seeds of his own destruction. This received wisdom has haunted me my entire life.

Tommy’s absence was never explained by his having fallen in love with a young female, clad in black. Or even, a male. Though we always presumed him to be male — gender in crows is not all that obvious.

Beyond rescuing the helpless, my father also loved to garden. In an enormous plot behind our house, he grew all manner of provisions. Every growing season launched a new, epic battle between him and the crows. They would patiently watch as he hoed and raked the soil into furrowed uniformity, examining his every move as he stooped to plant the seeds, pull weeds, or coddle a ripening fruit. Even as he turned away, they would descend to the freshly tilled earth to extract the fruits of his labor.

His makeshift scarecrows fooled no one, least of all the crows. When his frustration had reached its limits, he gathered up the large, stuffed owl with piercing, yellow eyes that dwelt in our basement, and set it in an old apple tree. Shotgun loaded, he withdrew to the side of the house. If there were anything more attractive to crows than freshly planted corn, it would be an owl in a tree. Owls prey on young crows, robbing the nests. The sky soon turned black with raucous crows circling the apple tree.

Almost seventy years later, I no longer hear the reports of his shotgun, though I know they were there. I envision the explosions of plumage, the soft black stones falling to earth. I feel the panic, the dispersion of that protesting vortex of birds. To this day, when I hear the call of crows, I cannot help reflecting on this scene and wondering, was Tommy among them?