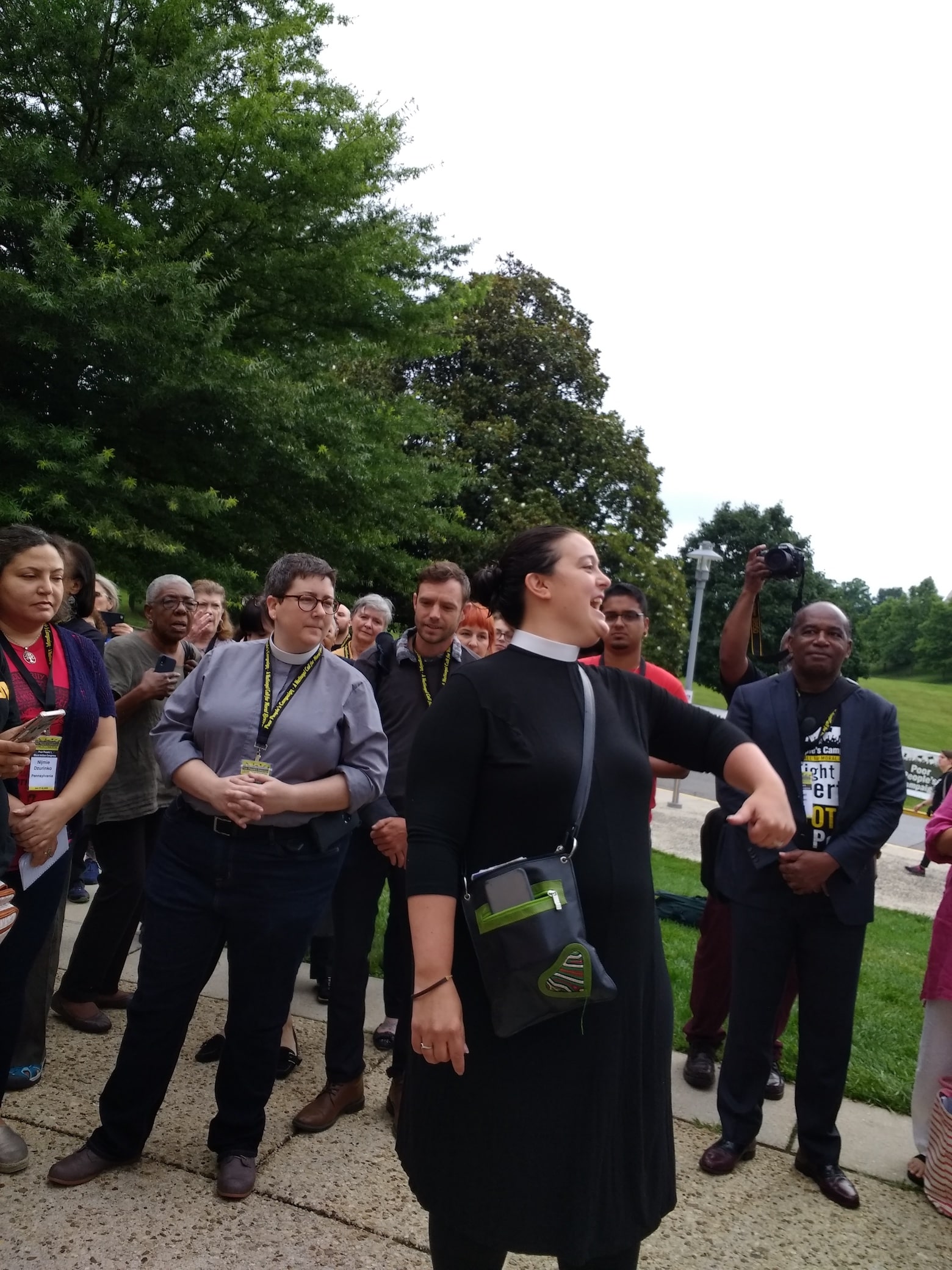 At the 2019 Moral Action Congress in Washington, D.C, the Rev. Dr. Liz Theoharis gathers attendees to pray for those who were going to testify at the House budget subcommittee hearing. Photo: Cynthia Pease

Sheffield — “I had no idea what to expect, absolutely none,” said Cynthia Pease, who, exactly one year ago, was in Washington, D.C., to take part in a three-day Moral Action Congress. “I went with a lot of faith,” she said, in a recent phone interview, of the event held at Trinity Washington University and sponsored by the Poor People’s Campaign: A National Call for Moral Revival (PPC). Pease found herself in a sea of nearly 1,000 poor people, moral leaders, activists and advocates from over 40 states across the country who convened in the nation’s capital to strategize, learn and build power together. “This is where I am supposed to be,” Pease thought as she surveyed the crowd, inclusive of all ages, genders, religious affiliations and political persuasions, one “so totally together, [completely united]” in their commitment to fight poverty and the interlocking systems that perpetuate it. Pease, who had planned to be en route to Washington once again this weekend, will participate virtually in the Mass Poor People’s Assembly and Moral March on Washington that will kick off today, Saturday, June 20, at 10 a.m.

“The approach is that you cannot solve one [problem] without working on all the others at the same time,” said Pease of what is being called “a broad and deep national moral fusion movement — rooted in the leadership of poor people — to unite our country from the bottom up” (June2020.org). “You do this by lifting up those most directly affected by the interlocking pieces and giving them a voice,” said Pease in a nod to the PPC’s aim “to challenge the evils of systemic racism, poverty, the war economy and militarism, ecological devastation and the nation’s distorted morality” (June2020.org). The broad movement, made up of individuals from all walks of life, hinges on a simple yet staggering fact: There are 140 million poor and low-wealth people in the richest country in the world (June2020.org). And, Pease points out, the pandemic has only made that number larger: “250,000 people each year, without a pandemic involved, die from poverty and its intersecting issues,” Pease said. “Just imagine how the pandemic has affected those people [already] at risk?”

Last year, Pease listened with rapt attention to individuals directly impacted by the five interlocking problems outlined above. “We heard from an elder member of the Apache stronghold, singlehandedly putting his life on the line to keep Apache land from being mined for copper; we heard from mothers whose children died of cancer because they didn’t have [health] insurance; we heard from veterans suffering from PTSD; we heard from undocumented people … LGBTQIA+ people … LATINX people; we heard from people who have been homeless and are now trying to fight for others,” she explained. As for her motive? “We were there to listen and to learn.” Pease was particularly impacted by the Poor People’s Moral Budget, the foundation whose underlying premise is “everyone has the right to live.” The document challenges the idea that poverty is the fault of the poor; “Instead, it finds that poverty is caused by structures and immoral policies, and therefore, it will take moral policies and larger social transformation to lift the load of poverty.”

Pease was so impacted by her time in Washington that she quickly set her sights on filling a bus to attend this year’s event. She noticed, on Rally.co — a bus rideshare aimed at connecting communities with their passions — that a charter bus could be arranged from Sheffield to Washington, D.C. “That was my clue,” Pease said that getting others to this event was necessary.

In addition to spreading the word through myriad local organizations and public speaking events, Pease quickly secured a slew of gifts to facilitate the trip: There were financial donations to offset the $75 round-trip bus ticket; there were volunteers to make lunch; and donations of snacks and water bottles for the long trip. “All kinds of things [came forward],” said Pease, who, in late February, began to wonder: Can this event be held? In March, she got the news that “we couldn’t be there in person.”

Despite this year’s PPC shifting to a virtual platform, the event itself remains “gigantic” according to Pease. “Recent [national] events have definitely boosted the systemic racism piece a couple notches,” she explained, in a nod to the real takeaway: “The overall belief is that these [challenges] are so interconnected that you can’t triage, you have to work on all of them at once.”

That this year’s event is being held on June 20 is no coincidence, either. Saturday’s kick-off will take place on the summer solstice — the longest day of the year — and on the heels of Juneteenth. “All [the PPC’s] events have a meaning attached to their chosen dates,” Pease explained in a nod to June 19, an American holiday that commemorates June 19, 1865, “the day when federal troops arrived in Galveston, Texas, to take control of the state and ensure that all enslaved people be freed,” (History.com) despite the troops’ arriving a full two and a half years following the signing of the Emancipation Proclamation. Juneteenth, short for “June Nineteenth,” honors the end to slavery in the United States and is considered the longest-running African American holiday.

Pease, who grew up in Great Barrington, is an Episcopalian lay preacher who has been greatly influenced by the co-chairs of the Poor People’s Campaign, Bishop William Barber and Rev. Liz Theoharis. Pease is a current member of the Prophetic Council of the PPC, where “our job is … to nag at the power structures that be,” she explained. She quoted a scripture, from Isaiah 58:12, in which humanity is called upon to be the “repairer[s] of the breach.” And while the PPC is based on Judeo-Christian principles, it is not exclusive. Pease heard from Native Americans, Muslims, individuals from all religious affiliations. Her reference to Isaiah was meant to be empowering: “We must become the repairers of the breach between the marginalized, the oppressed and the people in power, the wealthy,” she explained with a single aim in mind: to build one humanity that helps each other.

The ancient Greeks had two words for time: chronos and kairos. While the first refers to chronological or sequential time, the second suggests an opportune time for action. Pease, in bringing awareness to the intersecting issues that result in poverty — particularly during these uncertain times — is certain of one thing: “We are in kairos time,” she said, “where we [have been] given windows of opportunity due to a catastrophe.” Her position is clear: As a country, we need to take this time to get things right. “As horrendous as [current events have been], they make us sit up and take notice; it’s the only way we can make any good come out of catastrophe,” she added. “We’re all in this together; when you lift from the bottom, it’s good for everyone.”

NOTE: This weekend’s Digital Justice Gathering will be livestreamed here; the broadcast on Saturday, June 20, and Sunday, June 21, will be interpreted into Spanish and American Sign Language, and will be open captioned in English. For more information, visit www.poorpeoplescampaign.org.