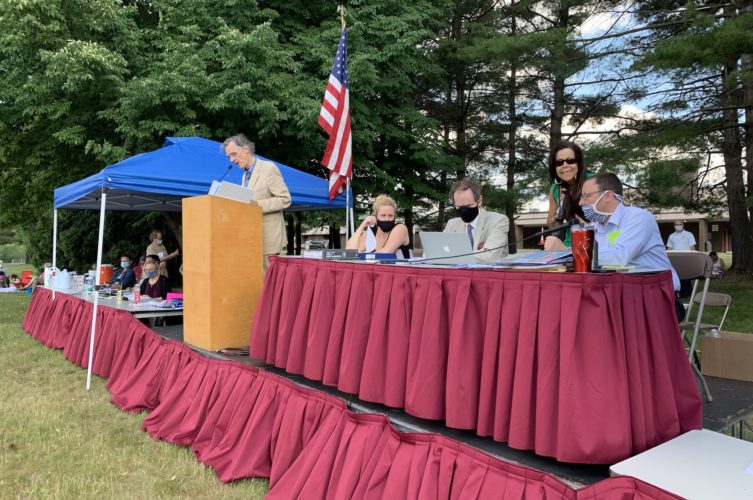 They passed a town budget and rejected a proposal to cut $200,000 from the police department spending plan. A motion to close the meeting and continue it until next month failed as well.

The meeting is typically held in the first or second week in May but back in April as the severity of the COVID-19 pandemic became more evident, the board decided to postpone it until June 25 in the high school auditorium. Last month and in the interest of safety, the board opted to hold the meeting outside, with the number of items a fraction of those on the original warrant. Click here to see the 30 items on the revised warrant, and here to see the budget spreadsheet.

Out of an abundance of caution prompted by the COVID-19 pandemic and physical distancing guidelines issued by the office of Gov. Charlie Baker, the selectboard opted to hold the meeting in the parking lot of the high school. Face coverings and social distancing were the order of the day for those on the ground.

In the weeks preceding the meeting, a movement had grown to postpone the meeting until next month because of uncertainties created by the pandemic and anticipated revenue shortfalls caused by the shutdowns ordered by Baker and the resulting economic downturn.

Though others spoke in favor of the idea as well, leading the charge were former finance committee member Sharon Gregory and local government watchdog Steve Farina, both of whom had written letters to the editor of the Edge arguing in favor of postponement.

See video below of Steve Farina motioning to adjourn the meeting until July 20:

But it was all for naught as the motion was ruled out of order by moderator Michael Wise, who said that by statute, the town meeting must complete its business by June 30 except in case of emergency and since none had been formally declared, the motion would not comply with state law.

Discussion on the budget quickly turned to proposed spending on public safety, which includes the Great Barrington Police Department. The spending plan for the department was more than $1.7 million.

See video below of Mae Whaley making her case for cutting the police budget, along with the ensuing discussion:

Several people spoke in favor of the proposal, but Police Chief Bill Walsh said the only place to find that much savings in his department would be to eliminate positions. Typically, Great Barrington has two officers on patrol. Cutting positions would leave an officer without back-up. After much debate, the measure was rejected 132-75. Housatonic resident Jeff Lowenstein proposed cutting $30,000 from the police overtime budget and that, too, was rejected.

Several people in the audience — some of whom sympathized with the goal of scrutinizing police budgets in light of police-involved deaths of African Americans nationwide — wondered aloud why so many voters were proposing cuts and changes in the budget at the eleventh hour, when they could have been involved in the budget process earlier in the year when these discussions were ongoing.

See video below of Police Chief Bill Walsh responding to a proposal to cut $200,000 from his budget, followed by more discussion:

Others urged voters to reject the entire proposed town budget as a way of making a statement and passing one later when revenue streams and finances were clearer. But town manager Mark Pruhenski countered that if the town did not have a budget passed by the end of the month, the selectboard would then have to pass so-called one-twelfth budgets, monthly spending packages that would be the same as the previous year, until a town meeting could be held and a budget could be passed.

Monthly budgets would put a tremendous strain on town staff and would make it virtually impossible for the town to pay its annual front-loaded bills, such as software subscriptions and the town’s share of funding the Berkshire Hills Regional School District, Pruhenski has said. In the end, the budget passed by a wide margin, as did the town’s Berkshire Hills assessment.

The town’s proposed operating budget, which does not include education spending, is more than $12.2 million, an increase of 4.9 percent over this year. The proposed capital budget is upwards of $4.3 million, a decrease of almost 50 percent from this year. Click here to see a PowerPoint presentation on the budget prepared by Pruhenski.

As usual, the amount the town owes to fund the regional school district was voted on separately. The town’s share of the Berkshire Hills proposed fiscal year 2021 budget is a little more than $17.5 million, an increase of nearly 5 percent over last year. The first of those payments is due in August. It cannot be made if the town is only allowed to spend one-twelfth of last year’s budget.

There was also a robust discussion of a proposal for the town to pay $185,000 for land on North Plain Road for affordable housing. Former selectboard member Dan Bailly argued that the town would be overpaying. The proposal passed anyway.

As the meeting stretched on until almost 10 p.m., it became apparent that so many attendees had left the meeting that a quorum was no longer present. It was also getting dark, so Wise continued the meeting until 6 p.m. on Thursday at the same place. The remaining warrant articles are the citizen petition items.