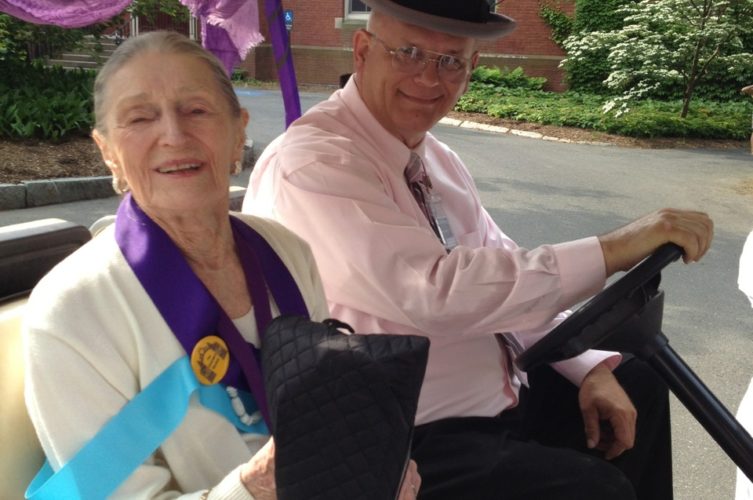 Editor’s Note: Ursula Setlow Pearson wrote the following poem, “Two Queens,” in 2012, upon the occasion of her 80th class reunion at Smith College in Northampton, Massachusetts. As it happened, that year was also the Diamond Jubilee celebration for Queen Elizabeth II, a multinational commemoration of the 60th anniversary of her ascension to the British throne.

Two queens were we

Clad all in white, she rode in a splendid,

Clad all in white, I rode in a golf cart of

Her path was emblazoned by red, a flamboyant

My class color, though royal purple, was

For each of us bands played above the crowds’

Her subjects lined London’s street in a

A procession of reunioning Smith alumnae

A battery of recording cameras pointed

directly at my face

With a curiosity as if I were an extra-

All looked at me with an unmistakable awe,

Perhaps the first centenarian they ever saw;

The world was her witness on international

And yet, I hope, though hatless, I cut a more

Than the royal icon of wealth and privilege

Who, always surrounded by handmaidens

Never toasted an English muffin or hulled an

I think she was deprived in her very protected

Although she is both mother and wife;

But her husband is only a consort, she’s at the helm,

My husband, by contrast, was king of my realm;

Pomp and circumstance and adulation are a

For plebeian me, it was a rare moment of

attention, fleeting as a dream;

Her number of years is her chief advantage over me;

She counted only 60; I was on an eightieth

She will reign the many years till destiny

My celebrity short-lived, I was queen for