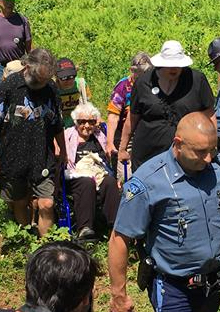 In her wheelchair Frances Crowe is arrested in Otis State Forest at the site of the construction of a fracked natural gas pipeline.

She’s 98, rides a Harley wheelchair,
arrested in Sandisfield for protesting a fracking pipeline,
her third arrest since she turned 90.

His hair stands like a torch holding light up to evil.

Frances Crowe has been at it since she’s 26,
a peace activist, war refuser, now keeping the earth from
being raped by hydro-fracking is her cause célèbre.

His tongue a serpent flickering falsehoods and frenetic tweets.

Frances Crowe protested the bombing in Hiroshima,
now she and twenty-six others wrote protest words,
buried them in a cardboard casket next to the trench.

His mind a money coaster running loops into our soul.

When hauled off in a sheriff’s cruiser for trespassing
she was asked how many times she’s been arrested,
“Not enough” she boomed to the forest and the birds.

A peacock strutting his walk of shame.

There is so much to be done, and I’m not in a wheel chair,
the world is coated with a lethal mist
I must make a stink to survive.

Women are nothing you peck at, devour and vomit up.

In the Summer of love, there were many liars in office,
helpless to transform, the body bags along the trenches,
the only thing to do was to get arrested.

— Mark Twain
Read next: A Pittsfield Fourth of July Parade