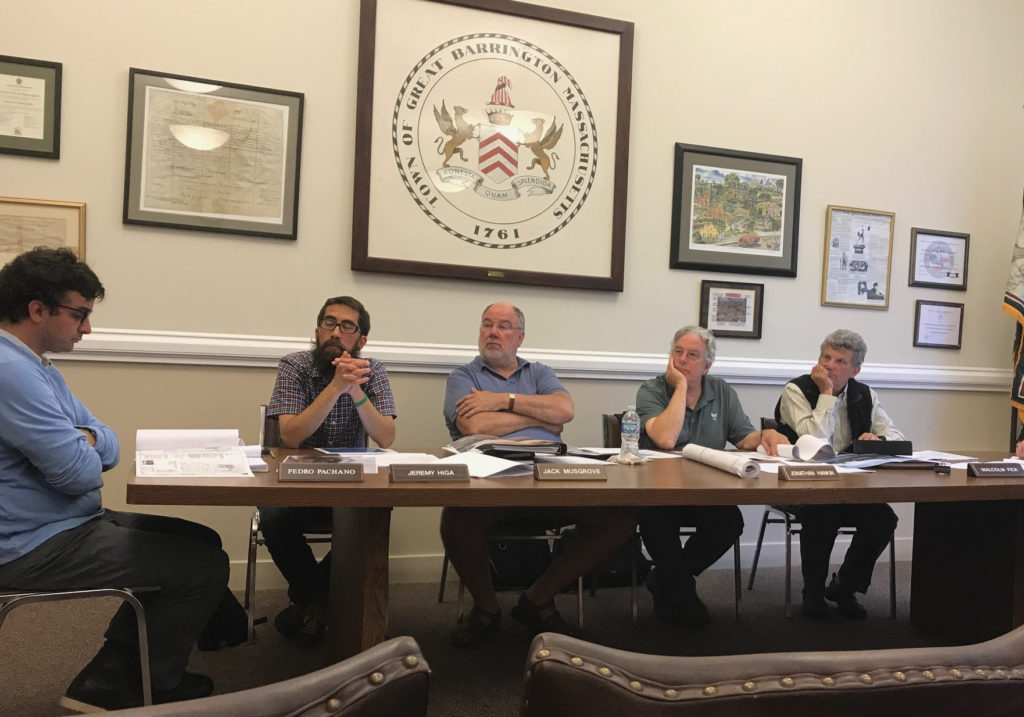 Victor Feldman
The Great Barrington Planning Board ponders a proposed expansion of the Walter J. Koladza Airport that would include the erection of three new hangars. From left, Pedro Pachano, Jeremy Higa, Jack Musgrove, Jonathan Hankin and Malcolm Fick.

Great Barrington — At dusk on Thursday (April 8), the operation manager for the Walter J. Koladza Airport, Kenneth Krentsa, gave a tour for the Planning Board of the much anticipated and controversial site for three new hangars that the new ownership of the Walter J. Koladza Airport have proposed to erect on the northern verge of the airport property, off Egremont Plain Road. The hangars will allow planes currently tied down along the runways to be parked in enclosed structures. 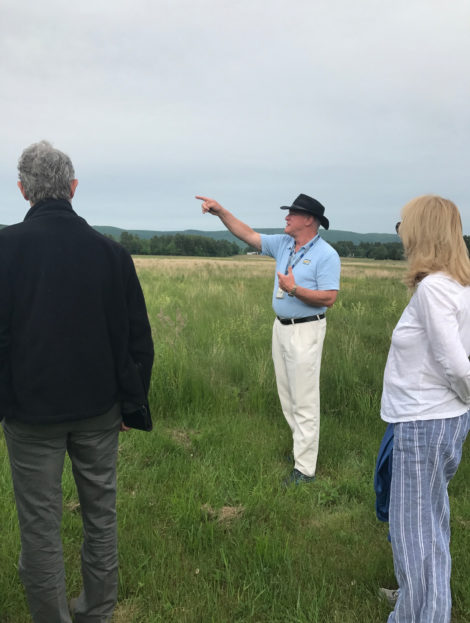 Airport operations manager Kenneth Krentsa points to the location of the new hangars during a tour of the airport property. Photo: Victor Feldman

While drafts and renderings of the project had been shown to the public prior, the tour marked the first time residents and town planners could see the site plan for themselves, and they didn’t hold back from voicing their concerns.

Walking backwards across the runway so that his front faced the crowd of 15 visitors, Krentsa resembled a college tour guide eager to show off the airport as if it were a campus. Pausing on the south side of the runway, he pointed to a three-acre rectangle of grass marked by four wooden posts.

“You see” he gleamed, “That’s where the three new hangers would be, and we can get six planes to fit into each hangar.”

The attendees, members of the town Planning Board, anxious property owners abutting the airport, and one selectman, Ed Abrahams, peppered Krentsa with questions ranging from concerns regarding the dangers of increased car traffic across the runway to the exact shade and color of the lights that would be installed in the hangars.

An hour later, when the Planning Board had reassembled at Town Hall, Krensta and his lawyer presented more drawings and renderings of the project. The airport is still waiting to be granted a special permit, an unnecessary document for the airport’s operation but one that will codify its legal status and help with future airport expansion projects. 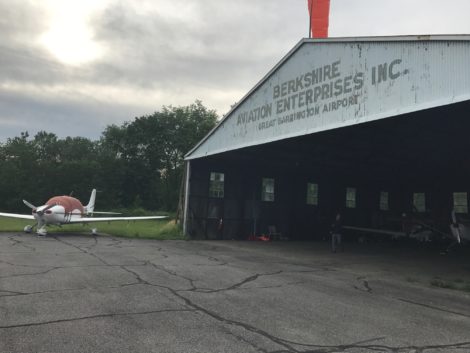 Krentsa explained that at 16.5 feet in height, the proposed hangers would be significantly shorter than the existing hangar along Route 71, but offer storage for an additional 18 planes. He also believes that pavement for access to the new hangar is not necessary for the construction site, as both cars and planes can travel over fine gravel, some of which already surrounds the existing hangar. The only infrastructure casualty would be the so-called “clam shell” hangar that would have to be removed to make way for the new hangars.

During the presentation before the Planning Board passed around a rudimentary rendering of the hangars in a wide-angle photo taken near the end of the runway and facing due West. Planning Board member Jack Musgrove noted that the photo “should have been taken from Seekonk Cross Road, because that’s what the public will see.” His colleague, associate board member Pedro Pachano, chimed in saying, “I can see the roof of the clamshell over the rendering of the new structures. But I thought they were as tall as the clamshell; this photo can’t be accurate then.” 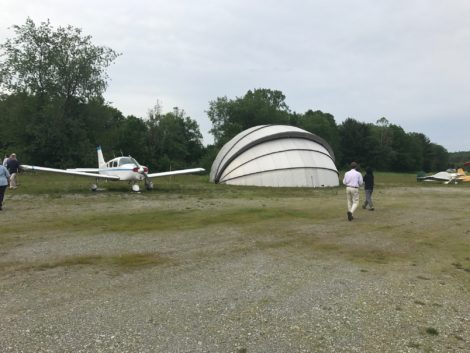 The so-called ‘clamshell’ hangar that will be removed to make way for the new hangars. Photo: Victor Feldman

Ultimately board members requested a new photo of the hangars taken from Seekonk Cross Road. In addition, they wanted further details about the color of the lights that would be used in the hangars, and proposed a provision requiring signs indicating to airport novices how and when they could get across the runway to access the hangars on the other side.

After 30 minutes of discussion, they opened the conversation up to the audience of 12 (an unusually small group considering the controversy surrounding the proposal). The first to speak was Marc Fasteau, a property owner whose home, while close, does not, in fact, abut the airport. Armed with his attorney, Richard Dohoney, at his side, Fasteau stood up and gave a rendition of the same speech he had made at past hearings. Waving a manila folder in his arms like a flag, Fasteau posited that the alarmingly high levels of lead in his drinking water, “twice the actionable level according to EPA regulations,” was likely caused by runoff or leakage of the leaded fuel sold and used at the airport.

“There is no evidence of that,” Krentsa retorted. 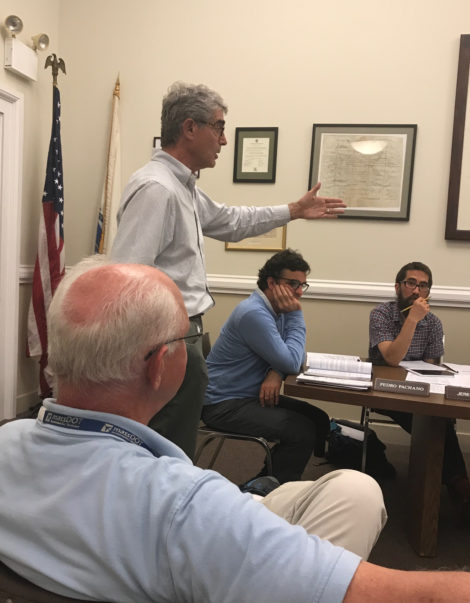 Marc Fasteau, who lives in the vicinity of the airport, argues that his well water has been contaminated with lead from aviation gasoline used to fuel planes. Photo: Victor Feldman

But Fasteau persisted that there was a correlation. He suggested that the airport use unleaded fuel, to which Krentsa replied that unleaded fuel was more expensive and, in fact, not compatible with small plane engines.

The conversation became even contentious when Fasteau accused Krentsa and the airport owners of putting economics before environmental safety, adding, “So, it’s all about the money then.” Immediately members of the board interjected, suggesting that such issues would not be resolved through a shouting match.

Musgrove assured Fasteau and his attorney that he and the board would acknowledge their concerns and would take the matter of lead pollution into account. However, the board had already questioned Krentsa about the precautions the airport was taking to contain oil leaks, and he appeared satisfied with their answers, at least for the time being.

Ultimately, the Planning Board decided that it wanted updated renderings and more information on signage and the potential visual impact of the proposed hangars before they voted to approve the site plan.

After the meeting, huddled at the top of the staircase in town hall, Fasteau and Ellen Murtagh, another concerned resident, spoke to each other in hushed tones.

“I hope they realize there is a potential pollution issue here,” Fasteau said.

The two looked unsatisfied with the proceedings of the hearing, but for the time being, the airport’s site proposal is gaining traction.

On Monday, June 12, the airport’s application for a special permit will be voted on by the Selectboard.

At a previous public hearing, on May 15, on the permit before the Select Board, Jim Jacobs, one of the airport’s partners, surprised everyone by making a long speech expressing frustration with the regulatory process and essentially threw up his hands, proclaiming he didn’t want a permit.

Select Board Chairman Sean Stanton was surprised and suggested Jacobs consult with his partners, and so the hearing was continued to June 12.