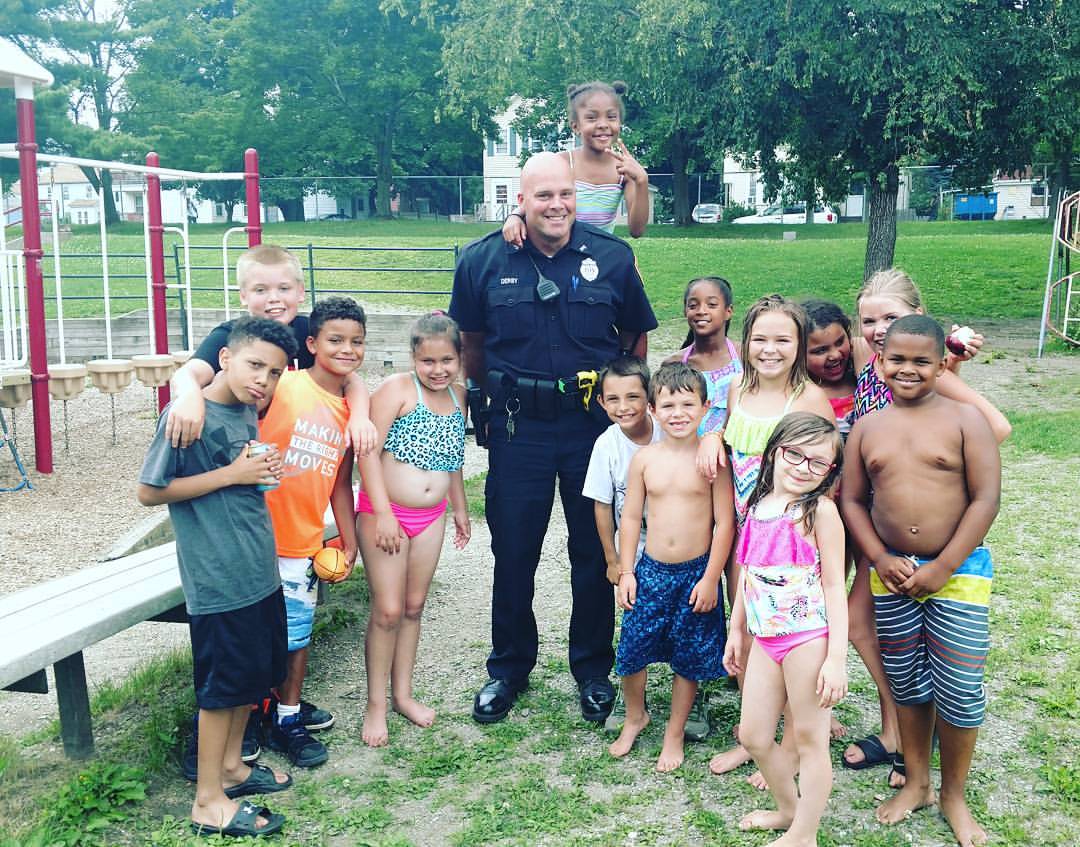 Pittsfield — When I was a kid growing up on Pittsfield’s Emerson Avenue, we waited eagerly for the unmistakable sound of the Ding-Dong Cart’s bell to punctuate the humid summer air after dinner. If my sister and I were lucky, our folks would give us each a dollar and we were left to choose between a Rocket Pop or Strawberry Sundae Crunch bar. These days the allure of sweet treats lingers, but kids in Pittsfield’s West Side neighborhoods are anxiously waiting for Darren Derby to make an appearance – Officer Derby, as he is known by a chorus of adolescent voices singing in unison when his cruiser pulls up – and the sustenance he is providing local youth is astonishing. Derby has spent what he refers to as “three solid years” shifting the community’s response to his arrival on the scene from “Why are you here?” to “Officer Derby, do you have any snacks?” and his mission is admirable: to create a relationship with the city’s youth that will ultimately change their perception of the police.

As to Derby’s approach? He is building a rapport by simply getting out of his cruiser and providing opportunities for conversation – often difficult conversation – with kids who, more often than not, have experienced trauma. The 38-year-old Lanesborough native is patient and articulate; through his actions, he is quietly creating a powerful movement in Pittsfield that aims at “creating a pathway, an open door, to get kids to open up,” and ultimately change their perception of law enforcement officers. He is met with a variety of greetings from handshakes and hugs to high-fives and fist bumps, but one thing remains consistent: he is showing up in city schools and parks and underserved neighborhoods and he is taking the time to get to know Pittsfield’s youngest residents as a result.

“A $10-box of pretzels creates an invaluable avenue for simple conversation and friendship that can last a lifetime,” the former corrections officer at Berkshire County Jail and House of Correction points out. “Thirty-six packs of snacks allow for a connection with 36 kids – can you imagine how many lives one can influence?” he asks almost rhetorically while gesturing broadly to his mini-warehouse in the basement at the Pittsfield Police Department on Allen Street. The interior space – void of natural light and roughly twice the size of the holding cells upstairs – is packed to the gills with loot. There are stacks and stacks of backpacks, plastic crates of teddy bears, Tonka trucks and board games; there are “necessity buckets” for families who have moved or are transient filled with washcloths, towels and other hygiene products; and then there are the snacks: cases of Rice Krispie Treats, Gushers, Ramen noodles, Flavor-ice pops, Pirate’s Booty, Cheez-Its and Nutri-Grain bars, just to name a few.

Derby has launched two initiatives to date, “Get Out of Your Cruiser” and “Hoops Not Crime,” which have made the former corrections officer a largely visible member of the community and for good reason: Derby’s persistent efforts to get out into the community have all been aimed at building a positive rapport with city youth. Derby’s dogged enthusiasm has resulted in the donation and installation of 31 basketball hoops throughout the underserved neighborhoods and housing developments along his primary beat on Pittsfield’s West Side. “I go for the numbers,” Derby says. “Where there will be dozens of kids outside in one spot,” he clarifies. His simply showing up has not only garnered Derby regional attention but it has also slowly elicited change: he is increasingly seen as a helper, which is working to eradicate what, for many kids, is a wholly negative perception of the police most have learned from their parents’ poor experiences with law enforcement.

Derby is meeting kids where they are – literally. On a recent morning, I joined him for a ride-along to see firsthand what summer looks like for many Pittsfield youth. We pull up at a house on Columbus Avenue and find two brothers shooting hoops; it’s just past 11 a.m. and it’s already hot. I am sweating profusely under my bulletproof vest. The boys take a break and help themselves to cold juice boxes and bags of chips from the back of the cruiser. At Morningside Community School, one group of kids is inside eating lunch and showing off their catapults constructed out of plastic spoons and wooden popsicle sticks. “I thought that was you, Officer Derby!” one girl shrieks. Another hugs his uniformed leg. “Officer Derby is awesome,” they tell me. “He is so nice, and he always gives us goodies and drinks.”

Outside, a second group of kids is clad in bathing suits, seeking shelter from the sun beneath a stand of leafy maples. As soon as Officer Derby emerges from the building, there are audible squeals and he is swarmed. “I’ve got my own little posse,” he jokes while a dozen kids jockey for his attention. One little girl jumps up on his back and he has to tell another “don’t touch my fidget spinners” before pulling out his handcuffs and offering a quick demo of the ease with which they move in circles. “Incoming!” one boy shouts, an informal invitation to play football. And after Derby completes a few passes, he yells, “One more – we’re leaving,” before sending the boy way back beyond the playground for the final pass.

At the Pittsfield Common, Derby hands out cold bottles of water and Gushers to little kids enjoying the sprinkler; others take a break from the swings and reach their sweaty fists through the black metal fence. “Hey, are you guys in jail?” he jokes before reminding everyone who is waiting for a snack, “ladies first.” We stop by Durant Park where Manny’s Camp is in full swing. “I missed D.A.R.E. camp today because I was getting braces,” one preteen girl shares. She and Derby then make three different attempts before getting their special handshake down pat. This location is particularly poignant as it marks the spot of Pittsfield’s most recent fatal shooting; and so, in a city where parks are abundant and kids are hoping to feel safe, the reality of the world creeps in. Most of these kids are “in situations that are not ideal – absolutely,” Derby admits. They are living below the poverty line, in single-parent households where Mom – for the most part – is working two jobs and the kids are on their own during the day.

Derby has a penchant for knowing the important stuff like what flavor Ring Pop the kids like, but he also asks about the really important stuff: How are things going? Did your mom get a new job? Who is watching you today? What are your plans for the weekend? Are things better at home? Some of Derby’s littlest fans meet him under unfavorable circumstances when he responds to a domestic call at their home; he is then able to follow up with them at school where he makes it a habit to check in regularly at each of the city’s eight elementary schools. The inverse scenario is also quite frequent: He establishes a rapport with a kid through his or her school and then meets that child when he responds to the home for a domestic call. Either way, Derby makes it a priority to do follow up with kids who have experienced trauma – a parent being arrested, a caregiver overdosing on drugs, or witnessing a domestic dispute – as a means of opening the lines of communication.

In an era when we are all moving too fast, Derby notes that “social media is not easy on the police.” It is all too common for the public to only hear half the story and jump to a negative conclusion. Derby’s work, largely spent outside of his cruiser, affords him the opportunity to “go in, form a relationship, be a positive influence, show kids what [this connection] can do.” Officer Derby is speaking most loudly through his actions; when he puts his message into words, however, he speaks passionately: “Don’t let your surroundings determine who you are and who you are capable of becoming.” In all reality, unless these kids are shown otherwise, Derby fears they will become products of their environments, which will likely be the case until someone shows them differently.

Is everyone a fan of Officer Derby? “The world is a cruel place,” he admits. And it all boils down to trust. Many adults do not feel safe when police officers are around; this reality stems from their experiences, wholly negative albeit real, but Darren Derby is working to change the community’s perception of what police officers do. “By simply changing kids’ perceptions about law enforcement, you are, without a doubt, going to change their parents’ outlook, too.”

Derby makes a special point of clarifying that he did not sign up to be hated, bashed and possibly shot for choosing to wear a police uniform; he signed up to be a helper. He is changing people’s perceptions of cops by getting out of his cruiser and talking to them.

“We all have our own niche in this career,” notes Derby of the more than 50 uniformed officers in the Pittsfield Police Department. For Darren Derby, his niche is clearly in creating avenues for dialogue and ultimately placing an emphasis on what he calls “old school policing.” This is a balance Derby has had to find while carrying out his everyday duties and, of course, some days are busier than others. He has 10 basketball hoops on standby at the station – they have been donated, many assembled, and he’s just scouting locations. Word on the street is Derby can even land a motorcycle layup. Those stirred to contribute should note that Derby can accept tangible items – not monetary donations – so, for the moment, he is limited. But he is making a difference, and that is clear. For all of this and more – kudos to you, Officer Derby. Kudos.