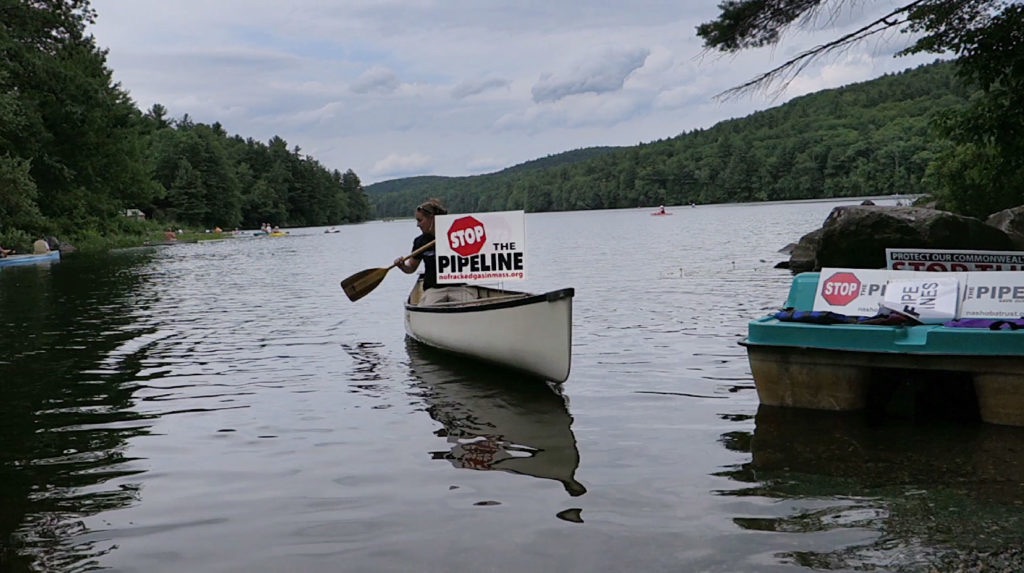 Sandisfield — Concerned citizens and activists will gather at Lower Spectacle Pond tomorrow (Saturday, Sept. 16) in an act of protest against the Connecticut Expansion pipeline project – a nearly four-mile expansion of existing gas lines that runs directly through Otis State Forest.

Construction on the expansion has proceeded this summer following regulatory and legal approvals, and now the pipeline company Tennessee Gas (a subsidiary of Kinder Morgan) plans to test its pipes by running pressurized water through them. That water will come from nearby Spectacle Pond. In response to the planned draining of over a half million gallons from the pond, grassroots activists are organizing a “flotilla” event, inviting folks to take to the pond in canoes, kayaks, paddle boards or other small watercraft in a symbolic act of protest. This is a repeat action of a flotilla protest on Lower Spectacle Pond held last year in July.

“We’re keeping the awareness alive that this is protected land under Article 97, and yet the Federal Energy Regulatory Commission (FERC) has allowed Kinder Morgan to build this pipeline and drain the pond,” said Joan Levy of Pelham, Mass. “It’s kind of shocking to me that this is allowed to happen when it’s against the [state] law.”

Levy is a member of the direct action group Sugar Shack Alliance, a lead organizer of Saturday’s flotilla event. Sugar Shack Alliance members have been arrested protesting the pipeline construction in Otis State Forest, an area that is supposedly protected under Article 97 of Massachusetts’ state constitution. But a May 2016 Berkshire Superior Court ruling determined that federal law, in this case the Natural Gas Act of 1938, preempts state law. Tennessee Gas agreed to pay $640,000 to the Commonwealth of Massachusetts to compensate for the eminent domain taking of land in the state forest.

According to Kinder Morgan’s project timeline, the pipeline expansion is expected to be in service by November 1, 2017. Testing of the pipeline using water – hydrostatic testing – is the next step before the company can run fracked gas through its pipes. “All hydrostatic testing activities are being conducted under the EPA NPDES General Permit and supervised by the Massachusetts Department of Environmental Protection,” Kinder Morgan project spokeswoman Sara Hughes said in an email.

In addition to the Sugar Shack Alliance, Saturday’s flotilla event is cosponsored by Berkshire Environmental Action Team, No Fracked Gas in Mass., and 350MA Berkshire Node. The event is family friendly and there is no risk of arrest.

“Through our presence, we will bear witness to the beauty of Spectacle Pond, protest its despoilment, and resist the fossil fuel industry’s continued degradation of our precious collective resources for private profit,” the event description states. The action is planned from 11am to 2pm and includes the following schedule:

Participants are asked to bring their own lunch and a lifejacket along with their boats.