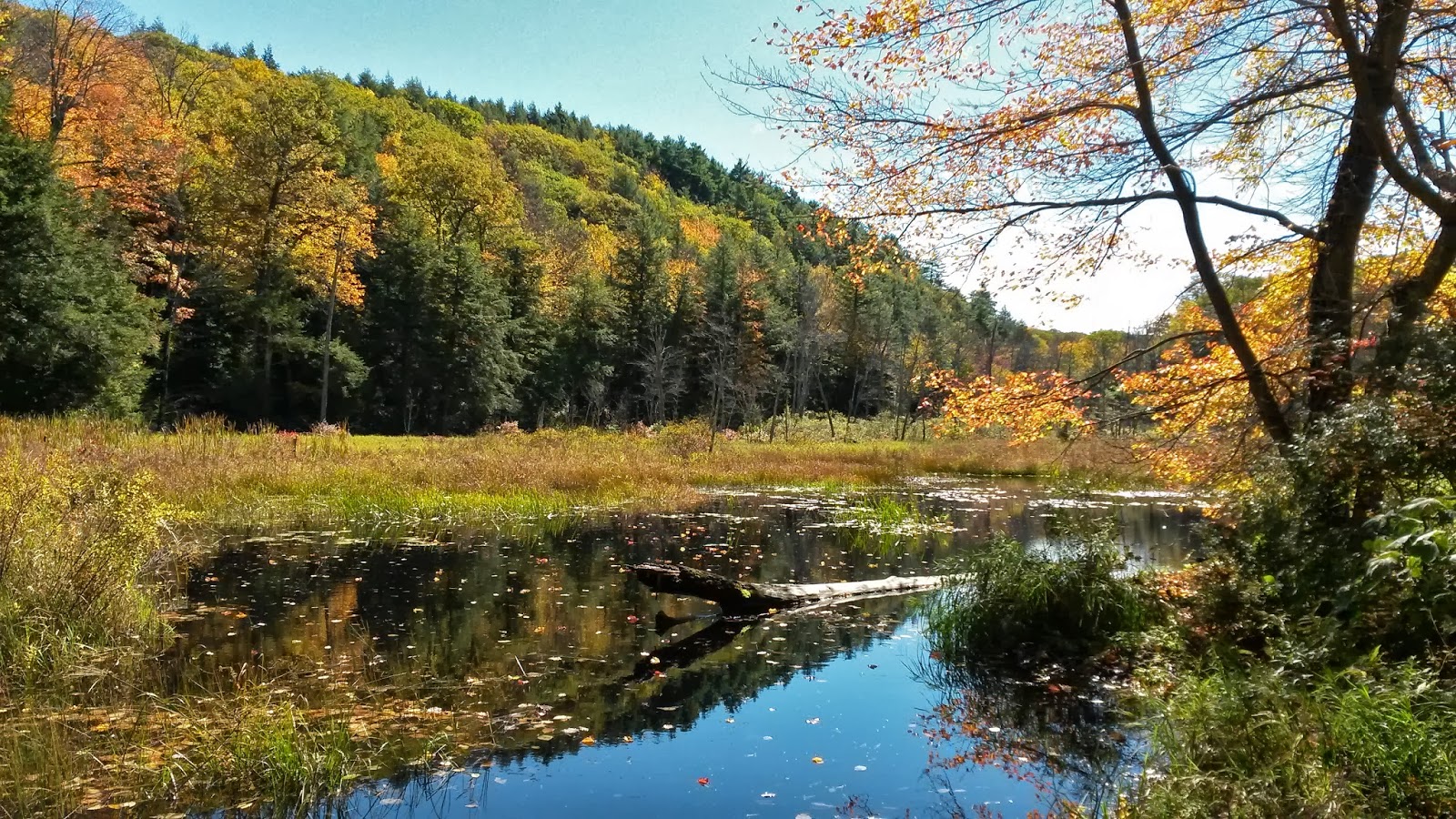 Should a parcel of rare old-growth forest, owned and managed by the Department of Conservation and Recreation (DCR) in Sandisfield, be stripped of its protected status under Article 97 of the Massachusetts constitution to allow construction of a pipeline spur to transport natural gas to Connecticut?

That will be the subject of a public hearing in Boston on Tuesday, November 10. The hearing, before the Joint Committee on State Administration & Regulatory Oversight, will take place at 11 a.m. in Gardner Auditorium of the State House. The public is invited to attend and participate.

In a turn of events that has angered many area residents, State Rep. Garrett Bradley, a Democrat from Hingham, a Boston suburb, introduced legislation that seeks to remove conservation protection from Berkshire and Hampden County land.

Jane Winn, Executive Director of the Berkshire Environmental Action Team (BEAT) asked, “How would any legislator feel if someone tried to take land that their constituents had worked hard to protect in perpetuity, only to have a legislator from the other end of the state try to remove that protection?”

State Sen. Benjamin Downing (D-Pittsfield) and State Rep. William (“Smitty”) Pignatelli (D-Lenox), who represent the impacted districts, strongly oppose the measure. They refused to introduce it when approached by Kinder-Morgan subsidiary, Tennessee Natural Gas Pipeline (TGPC), the potential beneficiary of a change in the forest’s legal status. Both officials are expected to testify against the bill at the hearing.

Article 97, adopted in 1972, states that “the people shall have a right to clean air and water…and the natural scenic, historic, and esthetic qualities of their environment,” with the fulfillment of these rights to be carried out through [state] parkland acquisition and conservation.

Land can only lose its conservation status if 2/3 of both the state Senate and House of Representatives vote to change it, and the so-called “disposition request” is signed by the Governor.

Moreover, if the property was either acquired or developed with grant assistance from the DCR, the converted land must be replaced with land of equal monetary value and recreational or conservation utility.

TGPC is moving forward to convert land in the Otis State Forest and the adjoining 62-acre Lower Spectacle Pond to add a 3.8-mile, 36-inch diameter loop to an existing natural gas pipeline.

So far, the company has filed the required Environmental Notification Form, has received approval of its Environmental Impact Report, and has offered to deposit $300,000 in the Conservation Trust. In addition, the legislation proposed by Rep. Bradley requires TGPC to comply with the EOEA’s no-net-loss policy by providing to the commonwealth (either by conveyance or by provision of funding) land of equal value for conservation or recreation.

In fact, TGPC plans to construct three loops: In addition to the “Massachusetts Loop” in Sandisfield, it is planning an 8.1-mile loop of 24-inch pipeline extending into Connecticut from Agawam, and another loop in New York state. Together, they comprise the “Connecticut Expansion Project,” the purpose of which is to increase the volume of gas that can be transported along existing stretches of pipeline in order to supply three natural gas utilities in Connecticut – Connecticut Natural, Yankee Gas, and Southern Connecticut. The Massachusetts Loop is the focus of this article.

One of 45 Remaining “Core Forests” Between Maine and Virginia

When the Otis State Forest was purchased by the state in 2007, Gov. Deval Patrick said, “The purchase of this spectacular property ensures its lasting protection and is an example of our prudent investment in the Commonwealth’s rare and irreplaceable natural resources.” The Department of Conservation and Recreation had long had its eye on the property, which had been owned by descendents of one family for more than two hundred years and which, after family members finally decided to sell, had become embroiled in a tug-of-war between developers and conservationists.

Taking a lead role in the preservation effort, Massachusetts Audubon and the DCR eventually succeeded in negotiating the sale.

Interior, wooded areas with few roads or non-forest uses are termed “core forests.” According to the Institute, only 45 core forests, including Otis State Forest, remain between Maine and Virginia.

Only eight years after receiving the Article 97 stamp of perpetual protection, the Otis State Forest and surrounding area are facing significant environmental degradation from the construction and maintenance of the Massachusetts Loop by TGPC. The company has agreed to mitigate many of these impacts, but “mitigation” is not the “lasting protection” lauded by Governor Patrick.

In its effort to “convert” the forestland from Article 97 status, TGPC submitted the required environmental notification form with MEPA. In July 2014, Maeve Vallely Bartlett, then-Secretary of the Executive Office of Energy and Environmental Affairs responded with her concerns, among which were:

State Senator Downing states on his web site that, “During [my] site visit, it was discussed that work associated with the project may affect biodiversity, cause erosion, and require the removal of old oak and ash trees that also serve as habitat.”

“Further,” he said, “the pipeline would cross and alter numerous wetlands and vernal pools, increase the spread of invasive plant species and permanently remove more than one million gallons of water from Spectacle Pond.”

At the time the approval was granted, the Secretary requested that TGPC draft proposed legislation that would convert the Article 97 land. TGPC’s legal counsel, LeClair Ryan, subsequently did this. The bill that was introduced by Representative Bradley of Hingham in July appears to be, word-for-word, the same as LeClair Ryan’s draft.

Representative Bradley, who introduced H3690 on behalf of Kinder-Morgan and TNGP, has taken so much heat from both outside and inside his own District that he felt it necessary to issue an explanatory statement on his web site.

“My interest in the issues of energy costs and supply is something that has been a policy priority for much of my time in public service,” Bradley said. He pointed out, “I want to be absolutely clear that though this is a bill that has been filed, it has not been voted upon. There were no backroom deals or dark of night filings…”

Bradley cites a study by Associated Industries of Massachusetts that showed the cost of electricity was substantially higher for households and businesses in Massachusetts than the national average.

Yet, nowhere in his statement does he acknowledge that his bill – styled an “emergency law, necessary for the immediate preservation of the public convenience” – would, if passed, send natural gas through Massachusetts for use by Connecticut utilities.

Leading pipeline opponent Katy Eiseman, president of Pipe Line Awareness Network for the Northeast, said, “I think that many legislators are convinced that we need more gas capacity, and are not aware that all of the gas for the Connecticut Expansion is slated for Connecticut, so if the Bill does make it to the full House for a vote, we will have a lot of educating to do.”

When asked whether she thought the bill might actually be enacted, Ms. Eiseman replied by email, “If we have a strong showing at the hearing and follow up with the Committee [the Joint Committee on State Administration & Regulatory Oversight] I think that there is a good chance that the bill will never make it to the full legislature for a vote.”

Further information on details of how to testify and contact information for the Joint Committee on State Administration & Regulatory Oversight can by found on Senator Downing’s web site at www.senatordowning.com.

Sandisfield Taxpayers Opposing the Pipeline has organized bus transportation to the hearing. To purchase a seat for $30 (limited to 55 people), go to sandisfieldtaxpayers.org. The bus will leave from the BigY parking lot in Lee at 7:15 sharp on Tuesday, November 10, returning at approximately 5 p.m.