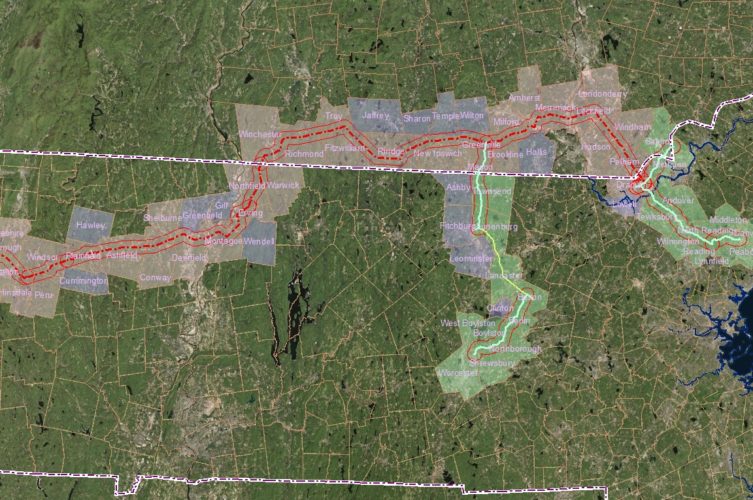 DALTON – Kinder Morgan’s proposed Northeast Energy Direct (NED) gas pipeline has garnered widespread opposition locally and across the region. In response a group of young faith leaders and concerned citizens mobilized an effort to raise awareness about the impacts of climate change and the need to refocus our attention away from destructive fossil fuel expansion and towards a more sustainable, cleaner energy future.

The Pipeline Pilgrimage, a 12-day walking journey that concluded Sunday, April 12, along the proposed pipeline route, kicked off on April 1 with a group of about 20 people walking from the South Congregational Church in Pittsfield to the First Congregational Church in Dalton. The Quaker-led walk will cover nearly 150 miles through western Massachusetts and southern New Hampshire, concluding on April 12 in Dracut, Mass., the endpoint of the NED pipeline.

The walk, organized and led by the New England Young Adult Friends Climate Working Group (YAFCWG), is meant to both bear witness to the pipeline route and call attention to the local impacts, and also to reflect on the troubling reality of climate change.

“We decided to walk the length of the proposed Kinder Morgan pipeline, starting in Pittsfield and ending in Dracut, with concerns for the local impacts of the pipeline, but more substantially with concern about how we are to move forward given the reality of climate change,” said YAFCWG’s Meg Klepack, one of the walk organizers. She acknowledged that while we “don’t know what to do in the face of climate change,” the science speaks clearly. “Given the science that says we need to get back to 350 parts per million of carbon in the atmosphere, [the future] definitely can’t look like continuing to build out infrastructure that carries fossil fuels that continue to build the CO2 levels in the atmosphere.”

Klepack and others have been organizing this pilgrimage since January. While the walk was Quaker-led and had a spiritual purpose, it was inclusive and open to all. The walkers stayed in churches and retreat centers along the way and partook of community potluck dinners.

“We wanted to be able to invite the extended anti-pipeline activist group to join us for food and fellowship each evening, and to be able to relate stories of the pilgrimage so far and also to hear about all the persevering work that has been going on in so many places against the pipeline,” Klepack explained.

The first of these community potlucks was held April 1 at the First Congregational Church in Dalton. Walkers mingled with local activists, and folks of all ages came together to share a meal and share their concern about pipeline expansion and climate impacts.

“People here tonight range from like 4 years old to 60-something,” walker Patrick Cage pointed out. “That’s what this pilgrimage is about, and that’s what trying to act for a sensible direction on climate change is about. It’s about trying to do justice for future generations and for today’s children.”

Cage, a climate justice intern with the Massachusetts Conference of the United Church of Christ, said he planned on walking the entire route. He sees this pilgrimage as a way to come to terms with these pipelines, but also to seek better way forward. “In the spirit of Easter hope, it’s about trying to find where the opportunity is for transformation to something more just and sustainable than the path we’re on right now,” he explained.

“I think one of the challenges with climate change is that it is abstract,” added Jay O’Hara, one of the walk organizers. “But when we do things like spend twelve days seeing where a pipeline is proposed to go, we make that a bit more real and we bring others with us to see that, making the abstract a little more concrete.”